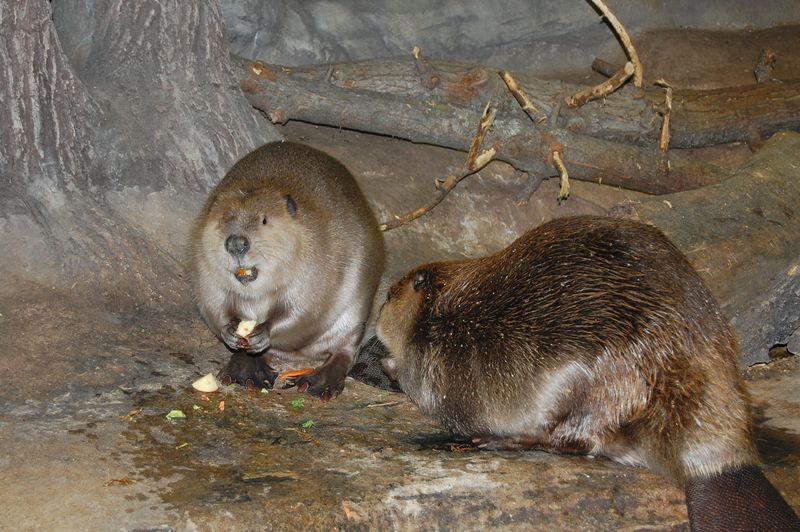 Visitors to the Oklahoma Aquarium can see beavers hard at work in the Ozark Stream exhibit.
Photo Credit: Ellen Gifford

Tulsa has always been my family’s favorite of all the cities and towns in Oklahoma. Along with its scores of unique, locally-owned restaurants and old neighborhoods of Craftsman and Victorian homes, Tulsa features a wooded, hilly landscape that is reminiscent of the eastern United States. Here, my family and I set out to explore Tulsa’s outdoor attractions.

We first stopped at Keystone State Park, just outside the city. During summer, Keystone is a popular destination for angling, boating, hiking and just about anything else you can think of. During winter, the park is so quiet you may want to consider a serene camping trip. We enjoyed a photo op with the official state parks mascot – Park Pal - who is a humorous raccoon wearing an Oklahoma State Parks hat and t-shirt – while driving through the park.

Next stop was Turkey Mountain, in southwest Tulsa, an oasis for those who enjoy mountain biking and horseback riding. Turkey Mountain features three trail systems, including the 1-mile Lower Trail, the 2-mile Pond Trail and the Ridge Trail, which runs 5 miles. There is also a paved bike path known locally as the “Turkey Leg,” which connects the West Bank Trail from I-44 up to Turkey Mountain.

Many of the trails here feature lots of steep climbs and descents and tend to be narrow, very rocky and technical in nature. We encountered two mountain bikers and their dog out for a morning jaunt on the Ridge Trail.

The River Runs Through It

Later that morning, we stopped at the pedestrian bridge at 29th and Riverside, next to the Arkansas River. The Tulsa River Parks Authority maintains more than 22 miles of paved trails, which are popular for jogging, biking and rollerblading. Other activities that are possible here include kayaking, fishing, picnicking and people watching. A map, located at the pedestrian bridge, was extremely helpful in explaining where to do what along the river.

After lunch, we headed north to Oxley Nature Center and its 11 miles of hiking trails through a variety of habitats. Most of these trails are fairly short – a mile or so in length – and are connected to one another, so you can customize your hike as you wish.

Two of the more popular paths here are the Prairie Trail, which runs across an open field, skirting a small pond, and the Blackbird Marsh Trail, which takes you, via an elevated boardwalk, through a marsh where you can observe aquatic plants, birds and other wildlife. The Interpretive Building has recently reopened with new exhibits and is a great place to begin or end your visit to Oxley.

I’ve been to aquariums from California to North Carolina, and the Oklahoma Aquarium ranks with the best.

After leaving Oxley, we stopped at the Tulsa Zoo, which is right next door. This is one of the best zoos I’ve experienced. There are terrific exhibits of big cats, bears and monkeys, among others. Also, I appreciate the way everything is spread out – it gives you the chance to walk and enjoy yourself. Of course, there’s also a small train to take you around if you want to give your feet a rest.

One of our favorite attractions was the sea lion exhibit. The zoo offers sea lion presentations from April 1 to October 31, but even though we were there out of season, the sea lions seemed eager to perform for us.

We wrapped up our busy day with a relaxing evening at the Hotel Ambassador. The Ambassador is known as the city’s premier boutique hotel, and it is certainly that. We loved the old world charm and architecture of this 1929 beauty. Its location on Main Street, near downtown Tulsa, puts the Ambassador within easy reach of most north Tulsa restaurants and shopping attractions.

After dinner at our favorite Italian restaurant, we returned to our room at the Ambassador, watched a movie and turned in for a peaceful night’s rest.

The Oklahoma Aquarium is quite an unusual attraction for this state, unusual because it has a better collection of saltwater fish species than some coastal aquariums. I’ve been to aquariums from California to North Carolina, and the Oklahoma Aquarium ranks with the best.

Of course, the shark exhibit – currently featuring such species as the bull, gray nurse and lemon – receives the most attention, but attractions like the hands-on stingray pool make it even more fun for children.

The aquarium features dozens of freshwater fish species as well, including some of the largest white crappie I’ve ever seen.

One of the new exhibits at the Oklahoma Aquarium revolves around Ozark streams. I was delighted to see this, as streams are such unique and precious resources, especially the spring-fed creeks of eastern Oklahoma. If you’ve never visited such a stream, this exhibit will show you some of the species you can expect to find in these ecosystems.

The beavers were a hit with the crowd, as were the river otters. There was also a raccoon and several overlooked but important species of fish, such as darters and silversides. The exhibit included information on the various components of a stream, including plunge pools, runs and falls.

No, we didn’t travel to the Baja peninsula, but we did stop for lunch at Los Cabos Mexican Grill & Cantina, located on the RiverWalk Crossing just down from the Oklahoma Aquarium. Los Cabos features a very festive, upbeat atmosphere with mariachis, margaritas and mucha comida (lots of food). What surprised me about this establishment were the many seafood items on the menu. I love Mexican seafood, but many restaurants are unfamiliar with this staple of the Pacific coast. We had the Tilapia Los Cabos, tamale cakes and plain old tacos, and we loved them all.

Restaurant Manager Dallas Chase told me that the Los Cabos patio is the place to be during the warmer months. He also said that during Cinco de Mayo, the restaurant features Mexican dancers and singers – and lots of fun – all day long.