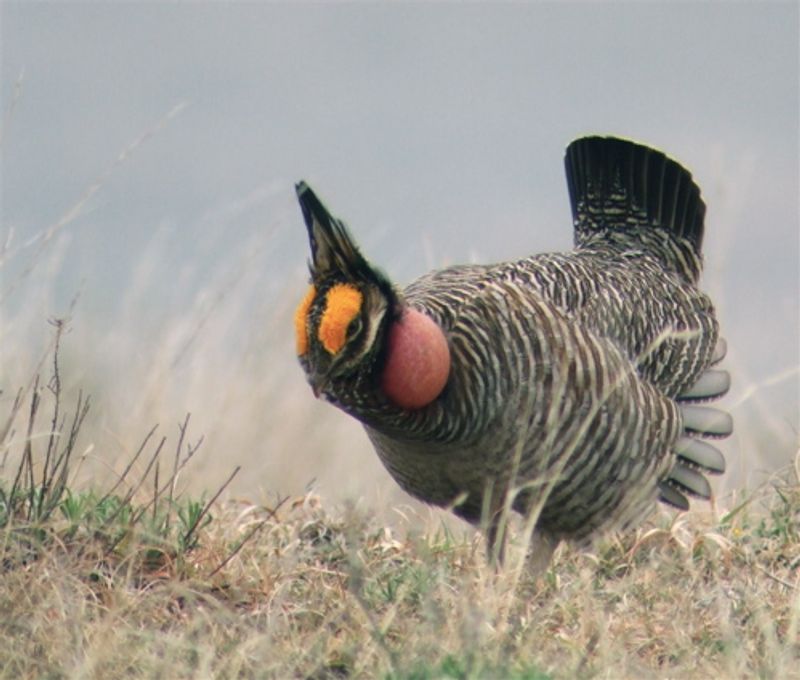 This male Lesser Prairie Chicken struts at the Selman Ranch in northwestern Oklahoma. Visitors come from around the globe to watch these rare birds on their native booming grounds.
Photo Credit: John Gifford

The colorful and quickly vanishing lesser prairie chicken probably has no idea its dramatic gobbling and mating rituals inspire travelers from across the nation to converge for days of hiking, exploring and terrain-traveling at the Woodward Lesser Prairie Chicken Festival.

Organized by the Oklahoma Audubon Council and hosted by the city of Woodward, the April festival spotlights a burgeoning niche of eco-travelers and birders anxious to observe and appreciate threatened or endangered species before they disappear.

A grassland nesting bird and native Oklahoma species, the lesser prairie chicken holds a unique place in the prairie ecosystem, with its elaborate springtime courtship displays and singular mating gobbles that can carry up two miles across the open prairie. Groups of males gather on communal mating grounds known as leks and return year after year, generation after generation, to the same lek for mating. That’s when the show starts, as ritualized dances ensue and gobbles, cackles and calls designed to attract females echo across the prairie.

But while the generational pattern of returning to ancestral mating grounds is fascinating wildlife behavior, the pattern, along with the prairie chickens’ aversion to human structures, makes the species particularly vulnerable to terrain disturbances. Although it’s not yet on the endangered species list, the U.S. Fish and Wildlife Service may soon list the lesser prairie chicken species as threatened.

“This is a species in decline due to habitat loss. They don’t like being anywhere near a vertical structure. They associate this with a place where predators can be found,” says John Kennington of the Oklahoma Audubon Council. “With the festival, we wanted to demonstrate that the lesser prairie chicken and wildlife are a valuable resource. It’s a sought-after experience for eco-tourists to view them, and that brings money to the community hosting the festival.”

Ritualized dances ensue and gobbles, cackles and calls designed to attract females echo across the prairie.

Festival attendees hidden behind viewing blinds close to the leks have the chance to watch the prairie chickens’ natural theater, and that attracts people from as far away as Alaska and Canada. The festival also features nationally renowned speakers; an assortment of conservation-oriented workshops; fence-marking, which helps the low-flying prairie chicken avoid becoming entangled in barbed wire; and tours to view other bird species, wild turkeys and prairie dogs. The overall effect is to immerse travelers in the natural wealth and grand panorama of the western prairie.

“We’ve never had anything of this magnitude,” says Michelle Hale, director of tourism and public relations for the Woodward Tourism & Convention Bureau, noting the festival is the result of a collaboration of ranches, farms, and public and private entities. “The workshops and offerings give people lots of choices, such as nature sketching and journaling or trekking to the beautiful high desert of Black Mesa, or an owl prowl and moth black-lighting at Selman Ranch. It’s a very full schedule.”

“These birds are a natural treasure,” he says. “Hearing them and watching them making their display, they have a spellbinding effect. It’s a really spectacular natural event.”