Get Your Flicks on Route 66

Watch a movie surrounded by architectural details and friendly ghosts at one of Oklahoma's historic cinemas along Route 66. 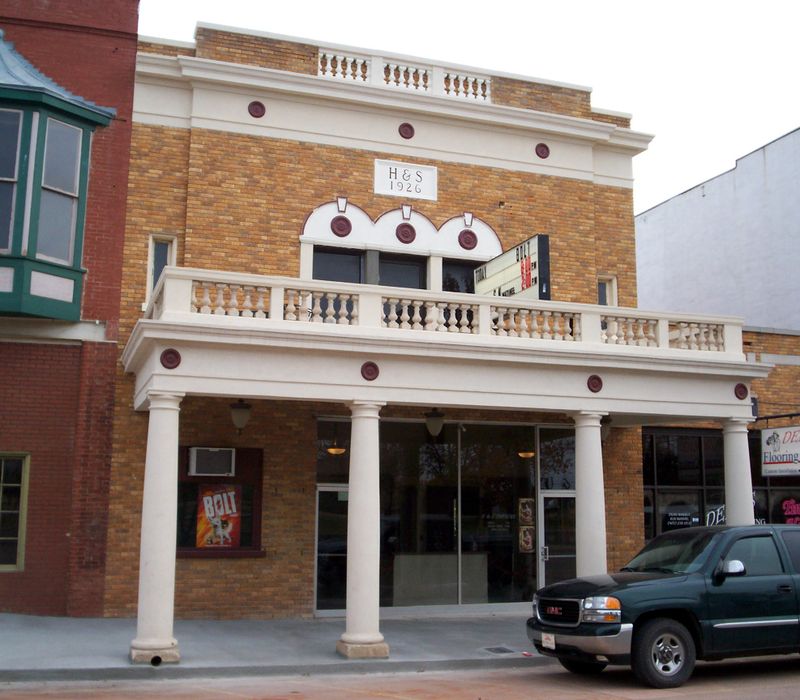 For watching movies, Emily and I appreciate high-tech multiplexes, with their state-of-the-art sound systems and stadium seating. But for historic charm and unique architecture, you can’t beat the old theaters on Route 66. Feel the pull of history as you sit where generations of locals have watched Gone with the Wind, Casablanca and other classics.

At the H&S Theatre in Chandler, the 76-year-old owner mans the ticket booth, just as he has for more than 30 years. As a teenager, Harold Wakely was the theater’s projectionist, and in 1976 he bought the H&S, which continues to show first-run movies.

The H&S gets its name from the last names of its first owners, retired Army Col. Richard Hoover and Herman Gerald Stettmund. They built the theater, including its Roman-style columns, in 1926. In the beginning, it hosted not only movies, but also vaudeville acts.

In the lobby, you’ll find hints of the theater’s past, including a 10-cent ticket stub and advertisements from 1943 and 1953. Original light globes still adorn restroom entryways. And if the main floor is full, patrons can sit on original wooden seats in the balcony.

Although tickets are budget-priced, the H&S boasts a digital sound system installed by Harold’s son Dean. When Harold decides he wants to get out of the business, Dean says he’ll gladly take over.

Circle Cinema, on an older section of Route 66, is the lone survivor among Tulsa’s pre-1960s theaters. It’s now the city’s premier venue for independent and foreign films.

The Circle, which opened in 1928, was a Tulsa favorite for decades, but then the neighborhood declined. In 2003, the Circle Cinema Foundation bought the building, and the Circle 2 screen debuted the next year. The Circle’s rebirth remains a long-term project, as efforts continue to get the Circle 1 and the main Circle Cinema screens up and running.

For now, the green glow of the Circle’s restored neon sign attracts movie lovers like a beacon. And the theater doesn’t show just art films – we went to a midnight screening of Pee-wee’s Big Adventure, snacked on chocolate-covered popcorn and entered a raffle to win a replica of Pee-wee Herman’s bicycle.

The Coleman screens movies infrequently, but when it does, you’re in for a real treat – its original Mighty Wurlitzer pipe organ is played during silent films or at intermission.

The Coleman Theatre in Miami is considered the crown jewel of Oklahoma's vintage theaters. Built in 1929 by a mining magnate, the Coleman is amazingly opulent. It incorporates Spanish and French architecture, and townsfolk have worked diligently to restore the theater – including its massive chandelier – since it was deeded to the city in 1989.

Today, the historic theater serves mostly as a venue for plays and live music. The Coleman screens movies infrequently, but when it does, you’re in for a real treat – its original Mighty Wurlitzer pipe organ is played during silent films or at intermission. The organ is a powerful instrument. During a visit to the pipe room on our guided tour, we could feel our bodies vibrate when the overture from The Phantom of the Opera was playing.

The Center Shines Once Again – The Center Theatre

The Center Theatre in Vinita, built in 1920 as the Lyric Theatre, is one of the oldest movie houses in Oklahoma. The Center’s yellow-and-red neon sign and marquee have changed little since they were erected in 1950.

The Center closed in the early 1980s, but Robert Jones later bought it, gave it a face-lift and reopened it in 1991. Once again, the Center shows first-run movies.

“It’ll always be here, as long as I want it,” Jones said.

Other small towns should be so lucky.