Explore the many eras of US military history at these must-see attractions in Oklahoma. 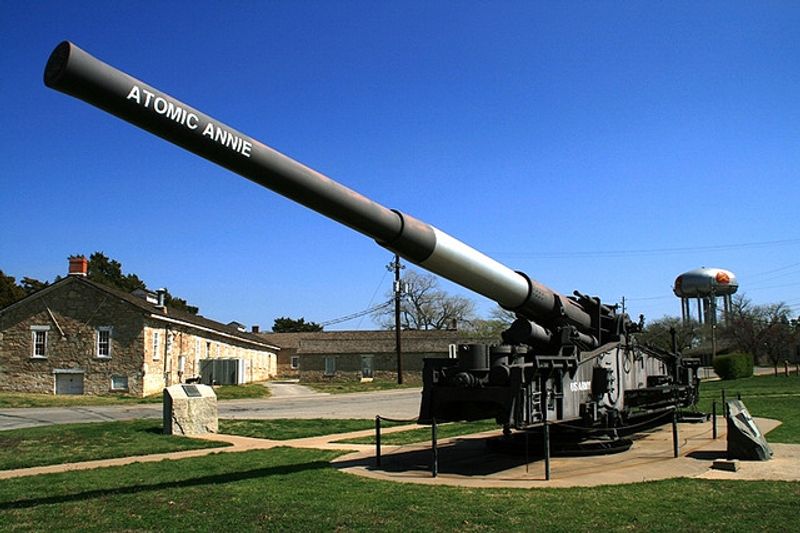 The Fort Sill National Historic Landmark is home to one of the only guns created to launch nuclear shells built in 1953 known as Atomic Annie.
Photo Credit: Marvin Bredel

This Oklahoma City museum also features an impressive collection of other military artifacts, including the Reaves Firearm Collection where infantry and cavalry weapons from the Revolutionary War to the Vietnam War are displayed. Outdoors, visitors will spot Thunderbird Park, which is filled with aircraft, tanks and large guns. The crown jewel of Thunderbird Park is the 40-foot-tall 45th Infantry Monument that honors the soldiers of the division who served in both World War II and the Korean War.

A landlocked state like Oklahoma might be the last place you’d expect to find a Navy submarine, but that’s exactly what you’ll discover in Muskogee. The U.S.S. Batfish Submarine & Military Museum is an actual World War II Navy submarine that sank 15 enemy vessels, including three Japanese submarines, during the sixth War Patrol in the South China Sea. No other submarine has bested the latter record, making the Batfish the most successful submarine killing sub in history.

The U.S.S. Batfish has been a staple in Muskogee for nearly 50 years since it was towed up the McClellan-Kerr Arkansas River Navigation System and docked in 1972. For many years, the submarine interior was able to be toured, but that changed after the area was ravaged by flooding in 2019. Today, visitors can still visit the unique attraction and spot other military vehicles in the surrounding park, including an army tank, cannons and missiles. Military memorabilia is also on display, and there is a Walk of Honor that pays tribute to veterans of all branches - Army, Navy, Marine Corps, Air Force and Coast Guard.

A landlocked state like Oklahoma might be the last place you’d expect to find a Navy submarine, but that’s exactly what you’ll discover in Muskogee.

For an impressive collection of military artifacts from almost every U.S. war, visit the Military History Center in Broken Arrow. This 6,400 sq. ft. facility displays military uniforms, weapons and photographs, many of which have been donated by Oklahomans. Highlights of the museum include a chaplain’s coat and Bible from the Civil War, a Leica camera that is believed to have been used by Hitler's personal photographer, and a “tiger cage” used during the Vietnam War to house American prisoners of war. Take a profound look into the lives and experiences of these brave soldiers through accounts in newspapers, magazines and books including the diary of an American POW. The Military History Center houses a substantial library, which is a great tool for research into military history.

Fort Sill is an operating Army base and home to the big guns used by the 4th Infantry Division. It also has a rich history as a 19th century frontier army post. The Fort Sill National Historic Landmark & Museum consists of approximately 50 buildings, including the US Army Field Artillery Museum, which opened in 2009. The museum’s collection is housed in three distinct galleries. The Central Gallery features the four principal components of artillery: guns, rockets, forward observation and fire direction control. The South Gallery showcases the fort’s history from the 1700s to the 1900s. The North Gallery starts with World War I and continues to the present day, featuring a prototype of the M777 Howitzer. On the museum grounds, visitors will spot the original Atomic Annie, an M65 gun designed to launch nuclear shots.

Another historic military post in Oklahoma is Fort Reno, which was established in 1874 to protect the Cheyenne and Arapaho tribes from an Indian uprising that eventually led to the Red River War. Throughout its existence, it has seen the Land Run of 1889, served as a German POW camp during WWII, and served as two remount depots from 1908 to 1947, after which it became an agricultural research station. Today, visitors to this historic fort will find over 25 structures, many of which have been restored and added to the National Register of Historic Places. Buildings include the museum, post chapel, commissary, officer quarters, guard house and visitor’s center, as well as the post cemetery where 70 POWs, Buffalo Soldiers and Indian Scouts are buried.

Special events at Historic Fort Reno include a National Cavalry Competition each fall, Spirit Tours and Tombstone Tales around Halloween, and Christmas Guns each December.

Located near Tinker Air Force Base in Midwest City, the Major Charles B. Hall Memorial Airpark honors trailblazing fighter pilots. Part of the Tuskegee Airmen, Major Hall was the first Black man to ever shoot down an enemy plane during WWII, and he was also the first African American to receive the Distinguished Flying Cross. Visitors to this free air park will spot numerous planes including a B-52 and RB-47E.

Located in historic downtown buildings, the General Tommy Franks Leadership Institute & Museum boasts a showroom and display gallery with items from General Franks' personal collection, including one of the world’s largest collections of challenge coins, which are small medallions inscribed with an organization’s emblem. Among the permanent displays is the “9/11: Never Forget” exhibit, which features a 14-foot-long, 3,000-lb. steel I-beam from the World Trade Center. Stop by the gift shop on the way out to pick up hand-signed copies of General Franks’ book, “American Soldier.”

Honor the women who served our country with a visit to the 99s Museum of Women Pilots in Oklahoma City. Conveniently located within the Will Rogers World Airport, this 5,000 square foot building has sections dedicated to women aviators' contribution to the U.S. military. In addition to the military exhibits, there is also an extensive collection of Amelia Earhart belongings, including the "lucky" bracelet that she incidentally left behind on her last flight and one of her famous scarves.

Finally, pay tribute to those Americans who paid the ultimate sacrifice with a visit to the Woodring Wall of Honor & Veterans Park in Enid. This peaceful setting is the permanent home of an 80-percent scale replica of the Vietnam Veterans Memorial Wall in Washington, D.C. that stands eight feet high and 380 feet long. This enormous monument includes the names of over 58,000 men and women - including over 990 Oklahomans - who served and died in the Vietnam War. The park also has several smaller living walls that serve as a memorial to Oklahoma veterans past and present.

Check the Woodring Wall of Honor’s upcoming events to coincide your trip with the Memorial Day celebration, Flag Day memorial service, Rose Day at the Wall or Veteran's Day ceremony.