Come with us as the Oklahoma Tourism Department team takes a road trip to the Muskogee area. 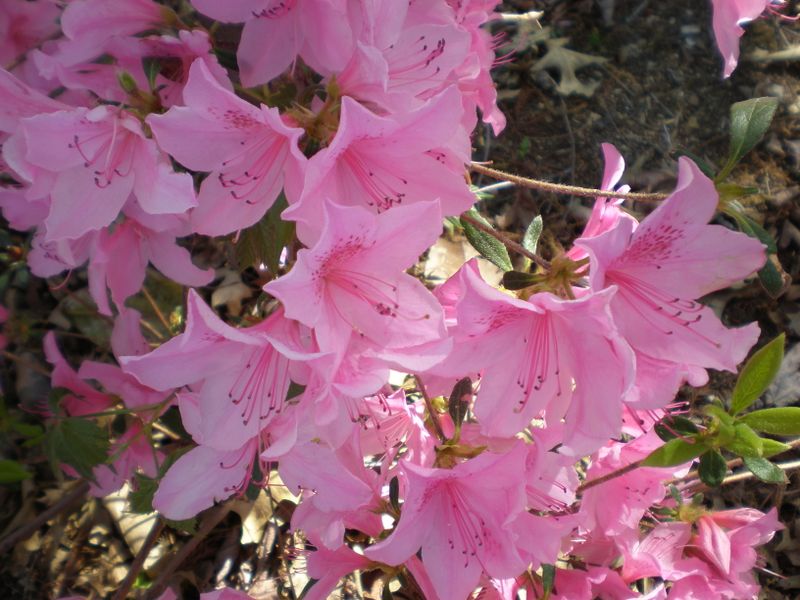 It was a beautiful April morning, Muskogee was on the menu and we were looking forward to finding some eclectic adventures awaiting us there. Our itinerary included the U.S.S. Batfish and War Memorial Park, the Whitlock Wishouse Bed & Breakfast, the Castle of Muskogee and Honor Heights Park where the azaleas were in bloom.

The U.S.S. Batfish and War Memorial Park was an extraordinary attraction that offers a tour of an actual submarine used during World War II. I became a little claustrophobic as we descended into the teeny, tiny interior that once held 80 Navy crew members, 16 torpedoes and 60 beds. The limited space of the living quarters was astonishing. There were only eight of us and I felt the need to conserve as much air as possible. Crew members alternated shifts throughout the day and night in order to fit everyone in the small mess area and take turns on the beds. The mere thought of being in that submarine with 79 other people made me want to grab a brown bag and breathe in and out deeply. The tour guide told us how the crew lived and conducted business for months at a time aboard the submarine. It was captivating learning about the lifestyle and achievements of the crew of the U.S.S. Batfish while viewing the place the crew called home. (Note: Due to the damage from the flood that occurred in May 2019, guests are currently unable to board the USS Batfish.)

After the dreamy young musician sang for us, we had an equally dreamy lunch at the Whitlock Wishouse Restaurant and Bed & Breakfast. The Whitlock Wishouse is a premier bed and breakfast inn that also serves lunch and dinner to the public on select days of the week. The meal was an incredible experience. After a delicious salad, we enjoyed pot roast so tender that it was hard to keep on your fork, mashed potatoes smothered in savory gravy and green beans seasoned in just the right way. The Wishouse desserts were so good it made me want to cry tears of joy.  Two giant desserts were beautifully presented in larger-than-life margarita glasses each about a foot tall. These pass-and-share desserts were unbelievable. The first was called Chocolate Suicide Cake and came complete with homemade ice cream and enough hot fudge to satisfy any chocoholic. The other option was hot bread pudding with a rich caramel sauce. Forget calling it simply sinful, this amazing treat could only have come from heaven above. After we finished eating, we embarked on a tour of the bed and breakfast guestrooms. The owner is an avid hunter, so his many exotic trophies populate the B&B. Each room has its own decorative flair which produces its own experience. Depending on your room selection, you might feel like you have stepped back into Egyptian times or gone on a jungle safari.

The Castle of Muskogee

By this time I had come to the conclusion that Muskogee held more surprises than I had even expected. Our next destination was the The Castle of Muskogee and, “Shiver me timbers,” I couldn’t believe what I found there. Yes, you guessed it; there were pirates (land pirates?) as well as other medieval characters awaiting our arrival. I wasn’t sure what kind of castle setting I would really find in Muskogee.  Talk about a big surprise. It was literally an entire Renaissance town. This quaint village was imagined and created by a preschool teacher with big dreams. The 60-acre kingdom really comes alive during the many events hosted there including the annual Oklahoma Renaissance Festival each May and Haunted Castle Halloween Festival each October. The castle stands proudly at the entrance to the village. The 30,000 square foot castle has plenty of space for damsels in distress, chivalrous knights and members of the royal court to feast and dance. Of course, there are a couple of secret passageways that lead to an extensive dungeon and torture chamber for those of you who are not on your best behavior.

As we toured the castle and the village, Pinky the Pirate followed along and as our tour guide struggled to maintain decorum. Pinky provided one of the most memorable moments of the trip. He repeatedly asked a member of our group for some change to throw into the wishing fountain since pirates are lucky and are sure to get your wish for you. Finally, she relented and gave him a quarter. As we looked on and waited for something spectacular to happen, Pinky said, “Arghhh, silly woman, never give your booty to a Pirate!” We were all tickled pink and still tease her about it. The costumed characters like Pinky the Pirate are selected for events like the Oklahoma Renaissance Festival and the Boare's Heade Feaste. They spend months practicing the dialects they are assigned and memorizing their character’s lineage before the events.  It’s all worth it because they are good, I mean really good, at making you believe they are the real deal.

The trip was almost complete when we arrived at Honor Heights Park, which was the perfect place to end a fun-filled day. All decked out in blooms of every hue, the park was really beautiful and serene. We walked along a path through the park gazing at the azaleas, and they were gorgeous in various shades of white, lavender, pink, and florescent red. Amid the floral explosion, the pond created a really relaxed atmosphere and reflected the bright colors beautifully. We loved the azaleas so much we snagged a few to bring home from a stand in the park that was selling the plants for a really affordable price.

Definitely check out the U.S.S. Batfish tour. But if you are claustrophobic, just be grateful that it isn’t actually under water.

When you eat lunch or dinner at the Whitlock Wishouse, be sure and save room for dessert.

The month of April is a great time to visit Muskogee because the Azalea Festival is usually in full bloom. Honor Heights Park also hosts the Garden of Lights Festival in December.

Do visit the Castle of Muskogee, but never give your booty to a pirate!

U.S.S. Batfish & War Memorial Park - Temporarily Closed
Due to flood damage in the park, guests are currently unable to board the USS Batfish.