Exuberant neon markers have long been a staple of Route 66 road trips and today, make for perfect photo-op stops. Let these neon signs light the way on your next excursion down the Mother Road. From big to small, from flashy to retro, these signs brighten up the sky along Oklahoma’s stretch of Route 66 both day and night. 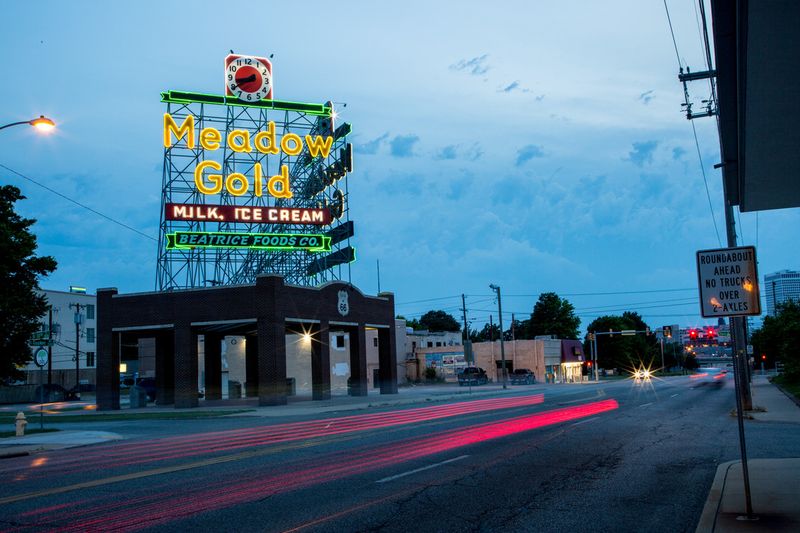 The circa-1939 Meadow Gold sign in Tulsa lights up the sky along Route 66.
Photo Credit: Lori Duckworth

From Miami in the east to Sayre in the west, neon signs can be found in cities and small towns across Route 66 in Oklahoma. These eye-catching displays are functioning artwork, announcing the presence of a much-needed diner or motel in the same vibrant way decade after decade. Although some signs are still located in their original location, others that were once lost to time have been reclaimed, refurbished and given new life.

Just across the border from where Route 66 crosses into Oklahoma from Kansas, you’ll spot a huge green and yellow neon sign announcing “Waylan’s Hamburgers - The Ku-Ku.” Though this restaurant was once part of a fast food drive-in chain from the 1960s, this is the last location still in operation. In addition to the original 1965 neon sign, the Waylan’s Ku-Ku Burger also features a giant cuckoo bird emerging from the front wall.

Point your car toward the charming red, white and blue neon sign at the Hi-Way Cafe two miles west of Vinita. This family-friendly restaurant serves breakfast, lunch and dinner all day.

The Desert Hills Motel is one of the few remaining Tulsa motor court motels that were once extremely popular along the Mother Road. Originally constructed in 1953, the motel offers 50 remodeled guest rooms with king-sized beds. You can’t miss the neon sign out front featuring a neon arrow and cactus, as well as the motel’s name. The circa 1970 sign was manufactured by the Claude Neon Federal Sign Company.

If you’re seeking a luxurious hotel full of Route 66 charm, the Campbell Hotel is sure to deliver. Outside, guests will spot the vertical blue “HOTEL Campbell” sign, while the inside of this National Register of Historic Places building offers unique Oklahoma-themed guest rooms like the Patti Page room, the Oil Barons Suite, the Leon Russell room and the Route 66 room.

One of Tulsa's oldest Mexican restaurants, El Rancho Grande has been open on historic Route 66 since 1953. Stop by this family-owned restaurant for authentic Tex-Mex food, including "Tulsa’s Best" cheese enchiladas and margaritas. The sign out front is nothing short of magnífico - featuring vivid pops of red, yellow and teal as a matador lassos the restaurant’s name with a saguaro cactus in the background. The sign is believed to have been original to the downtown El Rancho Grande location that opened in 1950.

It’s impossible to miss Buck Atom’s Cosmic Curios on 66. Whether you first spot the neon signs or the 21-ft tall rocket-clutching space cowboy, this fun little shop is a great place to stop for souvenirs and photos. At night, the neon Route 66 sign lights up with a silvery-turquoise sheen. Beneath the sign, more neon lights read “cosmic curios,” “souvenirs” and “toys.”

Few Route 66 neon signs have as much history as the Meadow Gold Sign in Tulsa. This large, open roof-style sign was originally constructed around 1939 on the corner of 11th Street and Lewis. Nearly 65 years later, the building changed ownership and was demolished. The community rallied to save the sign, and it was restored and placed just one mile west of the original location. A support pavilion surrounds the sign, which reads “Meadow Gold / Milk Ice Cream / Beatrice Foods Co.” on two sides.

Just a few blocks north of Route 66, Cincinnati Avenue is a part of the original Route 66 alignment. Here, you'll find an eclectic mix of hotels, coffee shops and restaurants, including The Vault. Located in what was originally the First National Auto Bank in the 1950s, this historic structure now sports a retro sign with a martini glass and coctail shaker as well as an eye-catching teal blue arrow pointing to the restaurant.

The Cyrus Avery Plaza Southwest in Tulsa is comprised of three vibrant neon signs representing three eras of Route 66. These 20-foot-tall replica signs include the Tulsa Auto Court, the Will Rogers Motor Court and the Oil Capital Motel. The plaza is a great place to stop, stretch your legs and read more about each motel’s history from the on-site plaques.

Hit the brakes and lace up your skates once you see the flying neon skate sign outside the Route 66 Roller Dome in Sapulpa. This family-friendly roller rink also offers an arcade, great music and DJ lighting.

The Rock Cafe in Stroud has been a popular Route 66 icon since opening in 1939. Despite a fire in 2008, this beloved eatery has maintained its historic rock walls, foundation and original grill since WWII. Outside, diners will spot two red trapezoid-shaped signs that showcase the restaurant’s name.

Follow the Skyliner Motel sign into this unique Route 66 motor court in Stroud. This vertical arrow design announces the motel with pops of blue, yellow and red. While the blocks spelling out “motel” have been updated from metal to plastic, the rest of the sign is original from 1950. The family-owned Skyliner Motel offers 10 very clean and quiet guest rooms with heat, air and a mini refrigerator.

Located at 920 E First Street in Chandler, the 66 Bowl Sign marks the future site of a bowling alley and sports complex. The original 66 Bowl opened in 1959 in Oklahoma City and closed in 2010. The sign was sold and made its way to Chandler where it now stands with a mix of vintage gas station signs.

Stop by the Lincoln Motel in Chandler for a retro Route 66 experience. The 1950s neon sign out front shines with red letters and a green outline. Beneath the neon name, smaller signs boast of free WiFi, cable TV and a microfridge in all rooms. The Lincoln Motel was built in 1939 and features cottage-style rooms.

Honorable Mentions: While in Chandler, be sure to check out the Chandler Route 66 Interpretive Center for plenty of neon signs indoors and McJerry’s Route 66 Gallery for a dose of Route 66 history.

Route 66 enthusiasts gather every year for the Arcadia Route 66 Neonfest. This three-day event is typically held each fall and welcomes all neon lovers to join in for made-to-order burgers, a film festival and plenty of neon displays.

Hang up your hat at the Western Motel in Bethany. This 1950s-era motel offers an eye-catching red and green neon sign topped with a cowboy hat.

The iconic Yukon’s Best Flour grain elevator was built in 1916 and stands a tall reminder of Oklahoma’s wheat industry. The mill operated for over 50 years before it was sold to Shawnee Milling Company in 1970 and closed two years later. Located atop the building is a bright sign from the 1940s that reads “Yukon’s Best Flour.” The bulbs were replaced with LED in 2013, so while not neon, it still deserves an honorable mention for its vibrancy and location on the Mother Road.

With an eye-catching sign that hearkens back to Route 66's heyday, the Western Motel in Sayre the final stop on Oklahoma’s Route 66 neon journey. With bold colors, a desert motif and retro font, this neon sign beckons visitors in to stay at one of the 25 ground floor guest rooms complete with TV, WiFi, a refrigerator and microwave.