Northwest Oklahoma is often overlooked, as visitors focus on the eastern half of the state with its plentiful lakes and water sports, however, some of the Sooner State’s most distinctive attractions and landscapes are located in the northwest region. 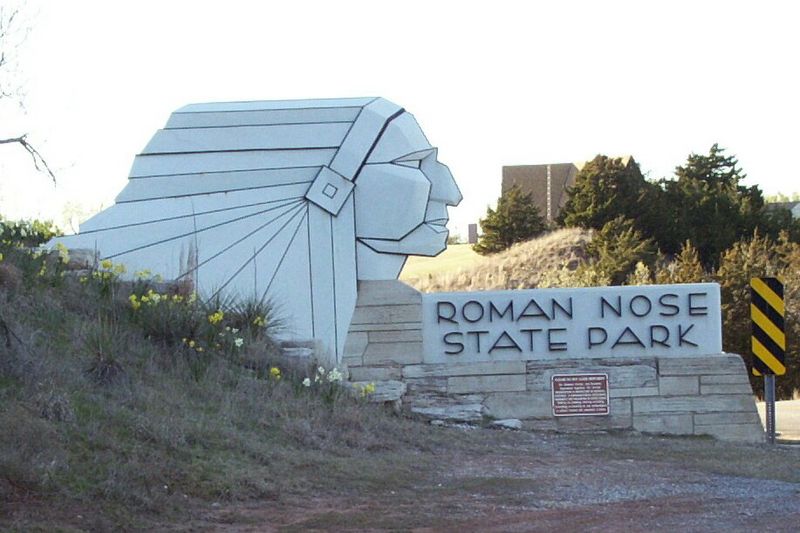 Roman Nose State Park, near Watonga, is a popular getaway with activities for the entire family.
Photo Credit: Betina King

About once a month, I realize that the city and its suburbs are affecting my quality of life.  During these times, I feel compelled to escape the concrete jungle and head somewhere with an open landscape, somewhere I can get away from the crowds. For me, northwest Oklahoma, also known as Red Carpet Country, with its wide open spaces and primitive landscape, is just the ticket.

Many people are aware that Black Mesa, with an elevation of 4,973 feet, is Oklahoma’s highest point.  But did you know about the dinosaur footprints found in the nearby nature preserve, as well as the region’s famous prairie dog towns?  I’ve included Black Mesa here for two reasons.  First, it is my contention that you haven’t seen Oklahoma until you’ve seen Black Mesa.  And secondly, it is one of the few places in the state where you can go and hear absolutely nothing, except for the wind blowing. For those of you suffering from city blues, this is your remedy.

When most Oklahoma travelers think of dune buggies and off-roading, they automatically think of Little Sahara State Park. But Beaver Dunes Park, in the panhandle, features the same kind of sand dunes and desert-like landscape in a smaller, 300-acre setting.  And because it’s not as well known, Beaver Dunes provides visitors a good deal of breathing room.  Visit on a weekday, and you might not see another soul.

Near the town of Cheyenne are some 31,000 acres of prairie habitat known as the Black Kettle National Grasslands. Set within these grasslands is the Black Kettle Recreation Area, a hiking, camping and picnicking oasis situated in an open setting that calls to mind cattle drives on the early frontier. You can also fish here – both Skipout Lake and Spring Creek Lake have good populations of largemouth bass and channel catfish.  Also part of the area is the Washita Battlefield National Historic Site where they Cheyenne village of Chief Black Kettle was massacred by Lt. Col. George Armstrong Custer.

Located just south of Waynoka is Little Sahara State Park – Oklahoma’s ATV and off-roading mecca.  Featuring 1,600 acres of sand dunes, some of which reach 75 feet in height, Little Sahara is the place to bring your dune buggies, motorcycles, Jeeps and ATVs.

It is my contention that you haven’t seen Oklahoma until you’ve seen Black Mesa.

There are some rules, to keep riders safe.  First, your vehicle must have a legitimate roll bar that is rated for one and one-half times your vehicle’s weight.  Factory SUV hard tops do not qualify.  Also, seatbelts are required for each passenger, and each vehicle must feature a 10-foot whip with at least one orange flag.  The flag must be situated within one foot of the top of the whip, as this helps make your vehicle more visible to other off-roaders.  Helmets are required for motorcycle riders under the age of 18, and if your vehicle features functional headlights and taillights, you can stay out on the dunes after dark.

Boiling Springs State Park’s gurgling, sandy-bottom springs once attracted Plains Indians, cowboys and settlers. Today, the springs still flow and this northwestern Oklahoma park, just north of Woodward, offers visitors the opportunity to relax in an oasis on the plains.

Camp at one of the park’s numerous tent or RV campsites, hike three different trails, or enjoy a relaxing picnic lunch in the shade of the oak, elm and walnut forest.  There are even four one-bedroom cabins and a swimming pool with concession stand.

The Salt Plains National Wildlife Refuge, near Jet, is the only place in the world where visitors can dig for hourglass-shaped selenite crystals. The refuge is also one of the most productive and important birding destinations on the southern plains. Salt Plains serves as a nesting site for the snowy plover, the endangered interior least tern, and the American avocet. Additionally, the refuge hosts a variety of waterfowl, cranes and shorebirds during their spring and fall migrations. In the winter, you may even catch a glimpse of a bald eagle. Salt Plains State Park also offers camping, cabins and outdoor recreation activities in this unique area.

If you feel like exploring, don’t miss Alabaster Caverns State Park, near Freedom. This 3/4-mile cavern is formed of alabaster, a rare form of gypsum, and is the world’s largest natural gypsum cave that is open to the public. Guided tours of the cave are conducted daily on the hour, from 9 a.m. to 4 p.m. If you're a little more adventurous, try wild caving from March 1 through September 30, when your party of at least three people can go off and explore as you wish. To do so, you will need a permit from the park office, as well as a hardhat, flashlight, long-sleeved shirt, long pants and boots.

Once a winter retreat of the Cheyenne, and named after one of the tribe’s chiefs, Roman Nose State Park, near Watonga, is located in a picturesque canyon nestled among scenic mesas. Surrounding the park are fields of buffalo grass and wild blue sage, giving the area a raw, unspoiled look reminiscent of the Old West.  But leave the six-shooters at home and bring your golf clubs instead. The park is home to an excellent 18-hole course, along with swimming pools, hiking trails, tennis courts and some excellent fishing at Lake Watonga. Roman Nose also features great opportunities for viewing wildlife and, during October, fall foliage.