Immerse yourself in the history, culture and novelty of Route 66 by visiting the top attractions on Oklahoma's stretch of the Mother Road. 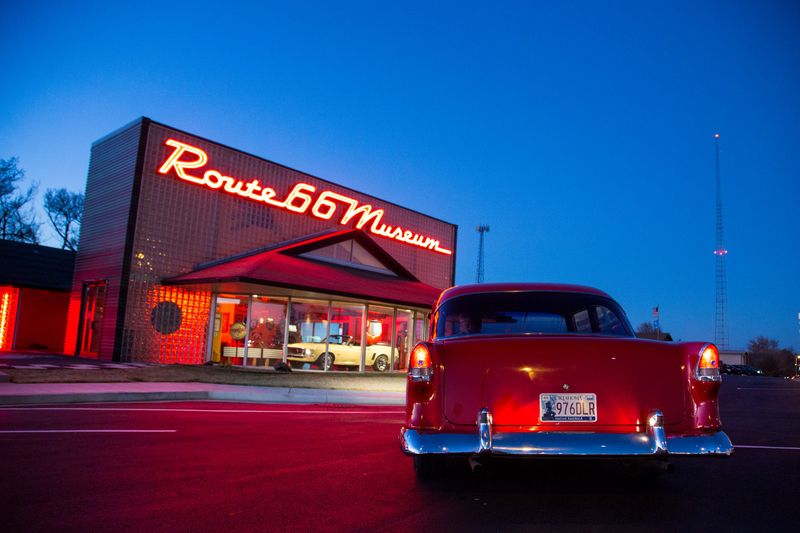 Get a glimpse of the Mother Road in its heyday at the Oklahoma Route 66 Museum in Clinton.

America’s most beloved highway, Route 66, has a rich and diverse history. Oklahoma has played a huge part in that history, being centrally located along the route and holding the country’s longest section of Route 66. Whether you’re more interested in Route 66’s past or the many quaint attractions lining the highway, here are some places you won’t want to miss along the way.

The Oklahoma Route 66 Museum in Clinton pays homage to the history of transportation and Route 66 in Oklahoma. See why the highway had such an impact on American culture and the hearts of people all over the world. The neon “Route 66” sign on the museum and a classic car in the window give visitors a taste of what they’ll see inside: pure Americana.

As you walk in, check out the “world’s largest curio cabinet,” a unique collection of items found on Route 66 throughout the years. Follow the timeline of Route 66 with and explore exhibits showcasing the history of the highway in each decade since its inception, starting with the route's initial construction in the 1920s. Artifacts, signs, vehicles and memorabilia have survived to tell the story of the highway’s golden years, its eventual decline and the nostalgia that surrounds Route 66 today.

During the bustling beginnings of Route 66, service stations popped up along the road to accommodate the needs of travelers. Built in 1929 in Hydro, Lucille’s Service Station is one of only two service stations of its kind left on Oklahoma’s stretch of Route 66. While no longer in business, Lucille’s is a tribute to a bygone era, restored to its original condition.

A historical marker at the site tells the story of the service station and its namesake, Lucille Hamons, who ran the business for over 50 years. Long gone are the attendants to pump gas, but the vintage pumps are still there. Remember or imagine the days when friendly service could be found up and down America’s highway.

Inspired by Lucille’s Service Station, a restaurant in Weatherford recreates the look of the service station, down to the vintage gas pumps in front. Lucille’s Roadhouse takes visitors back to the hoppin’ 1950s, with a diner-style restaurant and Route 66 memorabilia. From juicy cheeseburgers to gravy-covered chicken fried steak, the menu is overflowing with good ol’ American favorites. Play classic tunes on the jukebox while you wait for a Western hamburger steak or fried catfish. Dig into savory steaks and delicious house specialties upstairs in the steakhouse.

Visit the National Route 66 & Transportation Museum in Elk City to journey through each of the eight states Route 66 passes through – from Illinois all the way to California. See quirky roadside attractions that lured people to stop and get a feel for the experience of traveling down Route 66. Walk through antique cars displays and historical documents detailing the narrative of America’s highway. The National Route 66 & Transportation Museum invites both children and adults to experience automobiles of the past with interactive and hands-on displays.

“Drive” down Route 66 in a 1955 pink Cadillac and watch a black and white movie at a mock drive-in theater while sitting in a classic Chevy Impala. The museum is part of the Elk City Museum Complex, complete with displays and artifacts that give a glimpse into the lives of early settlers in Western Oklahoma, as well as the Farm and Ranch Museum, celebrating Oklahoma’s agricultural heritage. While you’re at the complex, make sure to see the replicas of a schoolhouse, opera house, doctor’s office and chapel, and immerse yourself in pioneer history.

Built at the end of the roaring 1920s, the Coleman Theatre along Route 66 in Miami defines the era. In the age of vaudeville and silent films, the Coleman was an entertainment destination for all ages. Today, the theatre hosts concerts, plays and even silent films again. Designed in Spanish Mission Revival style, the beautiful building invites visitors to step inside and be transported back in time.

Visit this magnificent theatre for a glimpse into the past, and marvel at the incredible interior. The opulent Louis IV decor boasts an elegant carved mahogany staircase, stained glass panels, gold leaf trim and crystal chandeliers. Also, restored to its grandeur, the original 1929 “Mighty Wurlitzer” pipe organ makes music once again in the theatre.

No trip down Route 66 is complete without a stop at POPS in Arcadia. One of the more recent additions along the highway, POPS is now a part of the roadside landscape and is a truly unique destination. The sleek, ultra-modern architecture of the building is only overshadowed by an iconic 66-foot tall pop bottle sculpture sitting out front. Visit this popular stop at night to watch the sculpture’s LED lights fill the sky with changing color.

At POPS you can fill up your gas tank, admire the collection of over 12,000 soda pop bottles, then browse over 650 different kinds of ice-cold soda. Find your favorite refreshing treat; whether it’s a traditional cola or a sweet fruity soda, POPS is sure to have what you like. Make your way to the old-fashioned diner inside POPS for a tasty snack or meal. Try a hand-dipped milkshake with a burger or BLT, or go big with a chicken fried steak. Then it’s back on the road for more adventure.

Stop by Totem Pole Park near Chelsea to see the world’s largest concrete totem pole, located right off Route 66. Totem Pole Park, a quirky and popular roadside stop along the Mother Road, was started by Ed Galloway in 1937 as a tribute to the American Indian. He designed and created the giant, colorful totem pole, standing tall at 90 feet and featuring various bas-relief depictions of animals and native people.

Built in 1898, Arcadia’s Round Barn had a presence many years before Route 66 was even constructed. The only wooden round barn left in Oklahoma, the structure originally housed livestock and hay, and doubled as a community center where dances were held. While the Round Barn has been a long-time Route 66 landmark, it fell into disrepair in the 1970s and 1980s. After the roof collapsed in 1988, the Oklahoma Historical Society acquired the property and volunteers banded together to repair the roof and restore the entire structure.

Today, the Round Barn is home to exhibits of Route 66 memorabilia and a gift shop. See this over 100-year-old architecturally stunning barn for yourself, and tour the structure for an unforgettable look inside.

Step inside the Seaba Station Motorcycle Museum in Warwick for a motorcycle lover’s dream. Seaba Station was built in 1921 as a full-service gas station. Later, the building served as an engine rebuilding shop and antique shop before being renovated and converted into a museum for vintage and modern motorcycles. Visit the museum to view over 65 motorcycles dating from 1908 to present. Admire the streamlined designs, and see how the bikes evolved over time. Displays, antiques and souvenirs round out this fascinating collection.

For an interactive take on the history of Route 66, look no further than the Route 66 Interpretive Center in Chandler. Housed inside a native sandstone armory built by the WPA in the ‘30s, the Interpretive Center offers a fresh spin on the Route 66 story. Using visuals and sound, a sensory experience is created for each visitor. Sit back and watch firsthand videos chronicling Route 66. Learn about attractions lost through the years, experience lodging as it used to be, and hop in the driver’s seat (literally) to take a virtual “ride” down Route 66.

On your way through Miami, whether you want a sit-down meal or prefer drive-thru, Waylan’s Ku-Ku Burger on Route 66 is sure to cure your food cravings. This unique place can’t be missed: the building resembles a cuckoo clock, right down to the giant yellow cuckoo bird popping out of the roof.

Waylan’s Ku-Ku Burger has been a Miami staple since the ‘60s, when it was one location of a national chain. Now it’s the only Waylan’s left, and people keep coming back for the delicious hamburgers, ku-ku fries, tator tots, fried pickles, buffalo burgers, chili dogs and so much more. Be sure to order a dip cone, sundae or malt that will satisfy any sweet tooth.

What’s big, blue, wears a baseball cap and has a great smile? Put on the brakes for the one and only Blue Whale of Catoosa. The Blue Whale was constructed in the early ‘70s as an anniversary gift and became a local swimming hole attraction. Today, visitors are invited to stop by and say, “Hello!” to the jovial cement mammal. Enjoy lunch on the picnic tables and marvel at the novelty of a landlocked whale in northeastern Oklahoma. Make sure to take plenty of pictures of this unusual roadside attraction along Route 66.

Explore a world of amazing collections at the renowned J.M. Davis Arms & Historical Museum. Located in Claremore just off Route 66, this museum holds an extensive arsenal of firearms whose origins span the globe and the centuries, including guns used by notorious criminals like Pretty Boy Floyd and Pancho Villa. In addition to this fascinating collection, there are thousands of other interesting items on display. WWI posters, vintage campaign ribbons, antique saddles, Western memorabilia and other artifacts give a fascinating look into America’s past. This museum is closed Sundays from November to mid-March.

View the inspiring life of Oklahoma statesman Will Rogers on display at the Will Rogers Memorial Museum in Claremore. Exhibits of art, documents and artifacts in the museum detail Rogers’ life as a trick roper, actor and writer, among other things. Watch movies featuring the entertainer in the on-site theater; his films are played there all day, every day.

Rare original posters from his films cover the walls of the museum. Rogers’ tomb is located on the museum grounds, with his signature quote carved there: “I never met a man I didn’t like.” Immerse yourself in the life of Will Rogers and find out why he was an important figure, not only in Oklahoma, but across the nation and around the globe.