No comfort food is more synonymous with the roadside diners along Oklahoma's stretch of Route 66 than the star of the state's official meal - chicken fried steak. So for connoisseurs and chicken fried steak newcomers alike, here are the top locations to sink your teeth into this tasty dish on Route 66. 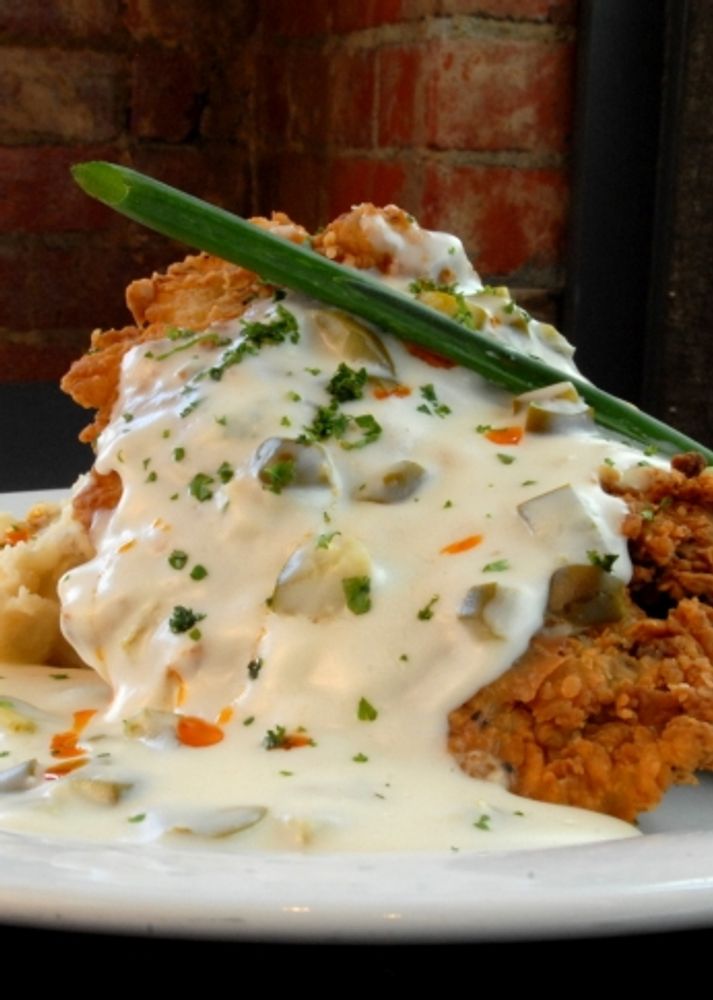 The traditional chicken-fried steak takes on a contemporary edge at Cheever's Cafe in Oklahoma City where it is served over red-skinned garlic mashed potatoes with jalapeno gravy.

The indescribably delicious combination of meaty goodness, crunchy batter and peppery cream gravy is found on virtually every Route 66 diner menu between Quapaw in the northeast corner of the state and Texola, where Route 66 leaves western Oklahoma.  As you travel Route 66 in search of the best chicken fried steak, the restaurants below, listed from east to west, are sure to be contenders for top honors.

A Vinita landmark since 1927, Clanton’s has repeatedly attracted national attention when its chicken fried steak was featured on Guy Fieri’s popular Food Network show Diners, Drive-Ins and Dives and  in Gourmet Magazine.  Start your meal off with calf fries dipped in horseradish sauce before you move on to the main attraction and be sure to end with a piece of made-from-scratch pie.  Several guidebooks list the restaurant as a must-stop, and we’re inclined to agree.

Tally’s Good Food Cafe in Tulsa is impossible to miss. Aglow with elaborate neon lights and decorated in a 1950s theme, the popular diner serves great chicken fried steak with a generous helping of nostalgia on the side.  Try the fried green tomatoes with ranch dressing as an appetizer and end your chicken fried feast with homemade peach cobbler.

Located next to the train tracks in southwest Tulsa, Ollie’s Station Restaurant is a popular stop for travelers headed toward Sapulpa. Grown-ups will enjoy fueling up on chicken fried steak with all the trimmings and kids will have fun watching model trains race around the room above their heads as they dine.

POPS, the newest Route 66 icon, opened in August 2007 with cutting-edge modern architecture and a monolithic 66-foot tall soda bottle sculpture complete with LED light show. It holds the distinction of being the only place in Oklahoma (and probably the only place on the planet) where you can wash down a hefty serving of chicken fried steak with your choice of more than 650 flavors of soda. Be forewarned: If you go on a weekend, it may take an hour or more to get a table, but the experience and atmosphere are well worth the wait.

Situated in a former flower shop just off Route 66 in Oklahoma City, Cheever’s offers an imaginative, upscale twist on the classic diner chicken fried steak.  Cheever's chicken fried sirloin comes with jalapeno cream gravy and a side of red-skinned garlic mashed potatoes.  Dessert is a must, but deciding won't be easy with the massive pecan-covered ice cream ball, strawberries and cream cake and huckleberry creme brulee being just a few of the choices.

When “chicken fry” is part of its name, you know a restaurant has to be good, and Ann’s Chicken Fry House does not disappoint.  Ann’s Chicken Fry House has been attracting hungry Route 66 travelers since the 1970s. The kitschy décor  includes some of the most interesting architectural neon in Oklahoma and hundreds, if not thousands, of handwritten notes that have been left on the walls by previous visitors, some of whom are famous celebrities.

Built in Weatherford in 2006, Lucille’s accompanies its chicken fried steak with mashed potatoes, gravy and a bit of history. The business is a tribute to the late Lucille “Mother of the Mother Road” Hamons, who for many years operated a historic Provine gas station on Route 66 just east of Weatherford. Lucille’s Roadhouse is a larger-than-life replica of Hamons’ former station.  Lucille's offers a total immersion experience in retro 50s decor and down home comfort food in a friendly atmosphere with a hometown feel.