On a mission to explore six attractions in Oklahoma City and Norman in one day, I set out with the rest of the Oklahoma Tourism and Recreation Department team to enjoy everything from dinosaurs to the nation's fastest rental go-karts. 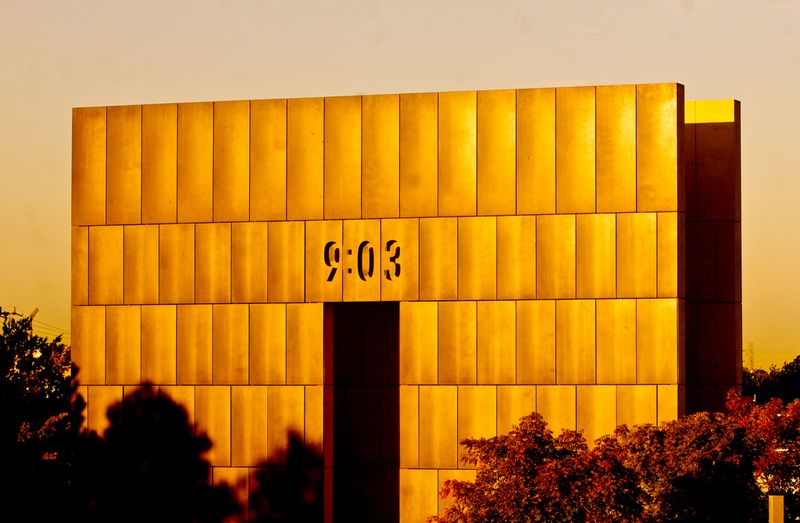 The monumental Gates of Time at the Oklahoma City National Memorial frame the moment in time when the Alfred P. Murrah Federal Building was bombed and we were changed forever.
Photo Credit: Mike Klemme

After our 4-billion-year stroll through time, we took a short drive to Sooner Legends, what I consider to be one of the most hospitable and coolest bar/hotel combos in the free world. Located in the hometown of the University of Oklahoma, this bar/hotel embraces the rich tradition of OU sports that spans a century. Rooms in the hotel are each themed for a famous OU athlete or coach, featuring photos and memorabilia, and you never know who you’ll run into at Sooner Legends, as many former OU athletic celebrities visit when in town.

After a few drinks, we strolled through the halls of the attached Sooner Legends Inn & Suites to see murals of the Sooner legends of yesterday. Painted on the walls you’ll see Bud Wilkinson and Barry Switzer coaching undefeated teams, Little Joe Washington leaping over defenders with ease and Roy Williams flying over a wall of Texas offensive linemen to sack the quarterback. There are more than just football greats represented here - basketball, baseball and gymnastics legends are depicted as well. Also in the halls you’ll find nostalgic century-old photos of teams sporting uniforms made of wool and leather. If you need lodging, I recommend a stay in the swank Bob Stoops Suite, which immerses you in memorabilia and images of this legendary coach. But each and every individual room is thoughtfully appointed with upscale touches that create a memorable stay.

As most of us entered full food-induced comas, our designated drivers made the quick thirty minute trek back to Oklahoma City and landed in the cool and comfortable confines of Science Museum Oklahoma. This is a place we’ve made several visits to in order to stay informed on its ever-changing exhibits. Today we were here to take in what we were calling the “Blow It Up Show,” otherwise known as Science Live. We enjoyed a great show dedicated to an explosive and mind-blowing experience while demonstrating chemical and physical reactions. Throughout the show audience members were selected to go on stage and assist in creating explosions, booms and flaming flare-ups all in the name of science. Needless to say, no one in the audience was bored and most sat on the edge of their seats, riveted by the well-disguised lessons being delivered on stage. While you’re at Science Museum Oklahoma, don’t miss the opportunity to learn to ride a Segway and let the kids enjoy the hands-on interactive exhibits.