Finding Authentic Oklahoma on I-44

When my family and I made the drive down Interstate 44, traveling from the northeast to the southwest corner of the state, we turned it into an adventure. 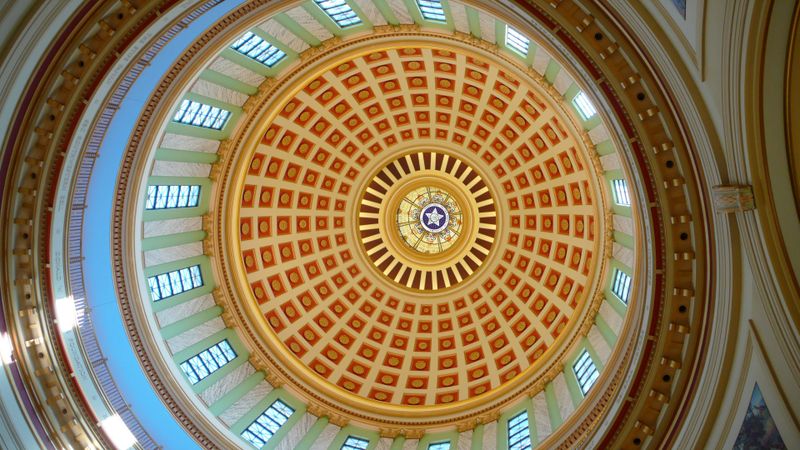 The fourth-floor rotunda is the best place to view the Oklahoma State Capitol's dome with its brilliant reds, golds and blues set in a dazzling geometric design.
Photo Credit: Anitra Brown

Our journey on I-44 took us through little farm towns and bustling cities in search of everything authentically and uniquely Oklahoma, from Mickey Mantle's hometown to Geronimo's final resting place. I indulged at great barbecue and burger joints, did some shopping, sipped some better-than-you-think Oklahoma wine and generally had a fabulous time just by slowing down.

We're in search of the best breakfast in Miami (pronounced My-am-uh) and screech to a halt when we see the packed parking lot at Buttered Bunns Cafe. It's nothing fancy, but I know I've hit the jackpot with my first bite of the just-out-of-the-oven-hot biscuits.

They're light and fluffy, and irresistible when dipped in the thick, peppery white gravy studded with little bits of sausage. These are the best biscuits and gravy I've ever eaten. Buttered Bunns is also known for its chicken-fried bacon with dipping sauce. Whoa! That's a breakfast worth getting off the interstate for.

Where Mickey Learned to Switch-hit

It's a few more miles up the road to tiny Commerce, where baseball legend Mickey Mantle grew up. A Mickey Mantle museum is planned, but we have to ask at the police station to find his modest boyhood home.

We can't go in, but a plaque tells us everything we need to know. Mickey's dad, Mutt, came home from the mines and pitched “righty,” while Granddad pitched “lefty,” making Mickey baseball's most formidable switch-hitter.

He was the only kid in town who didn't get in trouble for breaking windows, and we can still feel his happy spirit.

On the way out of Miami we spot a fabulous old movie palace called the Coleman Theatre. It turns out that a local mining magnate named George L. Coleman lavished a fortune on the Louis XV-style theater in 1929.

Coleman Theatre went through some "improvements" in the ‘60s, but hundreds of volunteers have restored it to its original opulence. One of the theater’s highlights is its breathtakingly beautiful chandelier.

Vaudeville stars such as Will Rogers used to perform here, and today cowboy crooners called Riders of the Purple Sage are up on the marquee. We wish we could stay to hear them.

We're hungry again, and a little bird told us Waylan's Ku-Ku Burger is Miami's favorite burger joint. The last remnant of a regional chain, the restaurant looks like a cuckoo clock from the outside.

Owner Gene Waylan mans the griddle himself, turning out the classic burgers of my youth – fresh beef patties, melted cheese, hot buns spattered with grease and lots of lettuce, tomato and onion.

The cherry limeade is pretty good, and Ku-Ku fries – waffle fries smothered with cheese and chili – disappear before we know it.

A Detour on Historic Route 66

Leaving Miami, there's a stretch of Historic Route 66 where we drive on the original road – only nine feet wide. Can you imagine? When the Mother Road was built, there was so little traffic that people just pulled over when a car came from the other direction.

It's slow going on a mostly gravel road, but we get a thrilling nostalgic whiff of the motoring as it used to be. Soon enough we're back on I-44 and stop for a shot of the only McDonald’s to straddle an interstate. We drive on, admiring herds of cattle grazing on tawny grasses.

I grew up in Oklahoma and never once made it to the Will Rogers Memorial in Claremore. The property was supposed to be Rogers’ retirement home and instead became a memorial when the famous humorist died in an Alaskan plane crash in 1935.

But I'm surprised how much fun it is. There are beautiful portraits, statues, saddles, old film clips and radio recordings. Best of all, there's a theater where we split our sides watching outtakes from the black-and-white classic The Roping Fool. (Look for the spirited billy goat that Rogers can't take down).

J.M. Davis was a Claremore hotel owner who had a thing for guns (20,000 of them), gorgeous German beer steins (a mere 1,200) and a few other oddities like straitjackets.

A Quiet Night in Luxury

It's getting dark by the time we check into Hotel Ambassador in Tulsa, a 1929 hotel elegantly restored to meet modern tastes – spacious rooms, plasma TV, a comfy club chair and a feather-soft bed to sink into. It's been a long day, so we curl up for a quiet night.

We're up early for a trip to Tulsa's Brookside District, the historic business district where you can shop by day and play by night.

Brookside by Day was our choice for breakfast in Tulsa. The must-have dish is The Murrito, a flour tortilla stuffed with scrambled eggs, chunks of spicy sausage, cheese and green onions. Sound good? It's even tastier with sides of salsa, guacamole and sour cream all over it.

We sample some of Tulsa's best shops, including Abersons (think Balenciaga), then we're off to the Philbrook Museum of Art, a 1920s Italian villa-style mansion once owned by an oil baron and now packed with Renaissance art from around the globe.  The Philbrook is also known for its beautiful formal gardens.

Golden cobblestone cottages line both sides of Medicine Creek, which splits the village.

I've traveled to France and tasted Château Pétrus, so I'm not sure what to expect when we get off the highway in Stroud to try some Oklahoma wine. We decide to start at StableRidge Vineyards and Winery.  StableRidge prides itself on using "vinifera" grapes like merlot and chardonnay that are grown in Oklahoma. The wines are a little on the light side, but very good. I can't tell you how this cheers my wine-loving Okie heart.

Oklahoma's State Capitol had a spectacular new dome added in 2002, and we want a closer look, so we venture just a mile or so off I-44 in Oklahoma City. This magnificent Neoclassical building was built between 1914 and 1917 for $1.5 million, and we're amazed how much marble was used then. It's everywhere!

The fourth-floor rotunda is the best place to view the brilliant reds, golds and blues of the dome's dazzling geometric design. Famous life-size portraits of Oklahoma legends Will Rogers, Jim Thorpe and Sequoyah (all geniuses, all Native Americans) hang here. Across the street at the spiffy new Oklahoma History Center we learn more about the state's pioneering spirit, American Indian tribes and oil-rich past.

The Asian District in Oklahoma City is a must-see, or should I say must-eat? Lido Chinese Restaurant is Oklahoma's first and most popular Vietnamese restaurant, and it's packed when we arrive for a late lunch. I listen to my waiter and order the sizzling deep-fried fish platter covered with veggies in a tasty garlic sauce. It's unbelievably fresh and wonderful.

He steers us to Super Cao Nguyen around the corner, a near-psychedelic supermarket where you can buy anything from hot steamed buns to giant stone lions.

Ribs Worth a Road Trip to Chickasha

In Chickasha, we're captivated by the signs for Muscle Car Ranch. It turns out to be more about great old signs than muscle cars (they're being refurbished in a shop), but I love great old signs. There's Fina, Maverick Motel and, hey, a couple of longhorns behind the fence. Nearby, Chief Drive-in Theatre (and miniature golf) delivers a shot of nostalgia year-round.

We're on the hunt for great barbecue, and Jake's Rib is on our hit list. Jake’s offers a mighty generous helping of meaty ribs – hot, messy and delicious. Now we know why people drive all the way from Texas just to eat here.

Medicine Park was created as a resort town back in 1908, and it still possesses the charm of another time. Golden cobblestone cottages line both sides of Medicine Creek, which splits the village.

It's an artsy town with great gift shops, homemade ice cream and candy, a restaurant called Riverside Cafe that specializes in catfish and plenty of hungry geese just waiting for people with a 50-cent bag of food.

We're bunking up at the Red Door & Green Door Cabins, two cobblestone cottages in keeping with Medicine Creek's distinctive architecture. It's so mellow that we wish we could spend a whole week here.

Where the Buffalo Still Roam

The Wichita Mountains capture Oklahoma as it once was: a rugged landscape that escaped the plow. It looks much as it did when Comanche Chief Quanah Parker inspired President Theodore Roosevelt to create the nation's first wildlife refuge - the Wichita Mountains Wildlife Refuge - in 1907.

After some hiking and prairie dog viewing in this 60,000-acre preserve, we drive to the top of Mount Scott and enjoy panoramic views of the grasslands below. Happy and wind-blown, we clamber around on the mountaintop trails, jumping from boulder to boulder like billy goats.

Lawton may seem an unlikely place for good Italian-American food. But we need to carb-load after that climbing, and Luigi's Italian Restaurant is a legend in these parts.

The diner-style restaurant's booths are packed with customers grabbing slices of cheesy pizza off stands – looks promising. We order, dig into a basket of garlic bread and wait to see if our waiter was honest.

He was. The pasta is homemade. The calzone is as big as a football with fresh spinach and ricotta. The coffee-flavored tiramisu is rich and dreamy.

A Visit to Geronimo's Grave

With teepees, covered wagons and an outdoor fort, the Museum of the Great Plains in Lawton is a great place to dig deeper into the history of the plains. It's also a good place to get the map to Geronimo's grave. You'll never find it otherwise.

We passed the guards at Fort Sill, the national historic landmark and active U.S. Army post where Geronimo was imprisoned. Traveling along lonely roads, we found the Apache cemetery, a beautiful wooded spot that radiated great peace and calm. Placing an offering on the eagle-topped gravestone, we paid our respects to the great warrior.

Will Rogers Memorial Museum - Seasonal Hours
The museum is closed on Monday and Tuesday until March 1.