Three large museums give travelers an in-depth look at the history of the Mother Road. 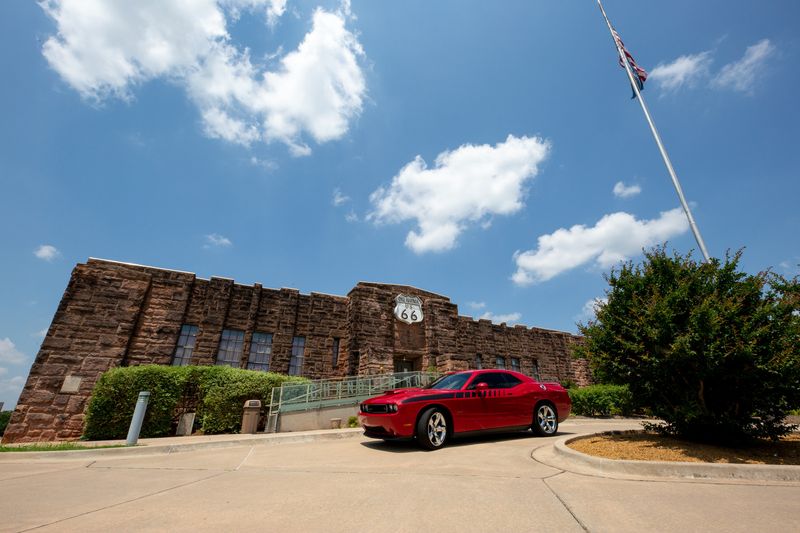 Stop in at the Chandler Route 66 Interpretive Center while venturing along the Mother Road.
Photo Credit: Lori Duckworth

Myrtle has been greeting travelers on Route 66 since 1962.

The 14-foot-tall kachina doll made of oil drums and scrap metal stood outside Queenan’s Trading Post on Route 66 at the west end of Elk City for decades.Through blistering heat waves and fierce storms, Myrtle maintained a silent vigil over the property until 1990 when, after renovation, she began a second career on the Mother Road at the National Route 66 Museum in Elk City.

Wanda Queenan, who once owned the trading post with her late husband, Reese, donated Myrtle to the museum, where she continues to serve as unofficial mascot. Queenan is curator of the museum, which is part of Elk City’s sprawling Elk City Museum Complex.

The National Route 66 Museum takes visitors on a virtual walking tour of the Mother Road. It is festooned with audio kiosks, murals, vignettes and memorabilia celebrating the historic highway, including an old truck that recalls the Okies’ flight from the Dust Bowl down Route 66 in the 1930s, as dramatized by The Grapes of Wrath.

Located near the National Route 66 Museum is the National Transportation Museum, which officially opened in 2006. Tucked into the museum’s collection of vintage cars, trucks and motorcycles are elaborate interactive displays that give visitors the opportunity to drive a pink 1955 Cadillac or watch the movie The Blob from behind the wheel of a 1959 Chevy Impala at a drive-in theater.

The complex also includes a collection of buildings constructed to resemble an early 20th-century Plains village. Visitors can peer through the windows of the Beutler Rodeo Hall, the Cowtown Watering Hole, Rock Bluff School and Pioneer Chapel as they follow an old-fashioned boardwalk around the property.

Also part of the complex is the Farm & Ranch Museum, which features a blacksmith shop and an assortment of windmills, antique tractors and agricultural tools. Queenan says the museum draws 20,000 visitors a year, not counting those who stop just long enough for a quick outdoor photo op with the statues of a buffalo and a Texas longhorn with horns the size of a car, the giant neon Route 66 shield out front or the ever-popular Myrtle.

The National Route 66 Museum is one of two where Queenan’s presence can be felt. Twenty-eight miles down the road in Clinton, her likeness appears on one of the plaques honoring members of the Oklahoma Route 66 Hall of Fame. The Hall of Fame, located in the lobby of the Oklahoma Route 66 Museum, celebrates the contributions of business owners, authors and others who have worked to keep Route 66 alive in Oklahoma.

The National Route 66 Museum takes visitors on a virtual walking tour of the Mother Road.

Missing from the display – but critical to the museum’s success – are the local residents who raised $250,000 in matching funds to help build what is now widely regarded as the granddaddy of all Mother Road museums.

The Oklahoma Historical Society acquired the museum in 1991, and the Oklahoma Route 66 Museum opened in 1995.

Acclaimed architect Rand Elliott, a Clinton native, designed the museum’s sleek exterior, which evokes the 1950s with its retro lettering and architectural neon.

Behind the front window sits a classic car. During one visit, we found a 1963 Corvette; during another, a 1957 Chevy was parked in the lobby. The museum rotates out the cars – provided by local automobile enthusiasts – every few months.

The museum, crammed with Route 66 memorabilia, presents six decades of the highway’s history, from its inception in 1926 to its decertification beginning in the 1970s.

Its exhibits include a black-lit, psychedelic-colored Volkswagen Microbus from the 1960s and the original neon sign from the late Capitol Motel in Oklahoma City.

The museum draws 35,000 visitors a year, and that number keeps growing, she reports.

“We have so many international visitors,” Smith says. “More people in foreign countries know about Route 66 than Americans.”

One of the most recent additions to the museum grounds is a 1950s-era Valentine diner. The diner sat on Route 66 in Shamrock, Texas, until it was moved to Clinton and restored in 2003. It is open by special request to tour groups; bottles of soda and snacks are served.

The museum’s gift shop supplies travelers with everything from Route 66 party lights to silk ties featuring a map of the road and a tie tack shaped like a car pulling a teardrop-style travel trailer.

Clinton isn’t the only Oklahoma Route 66 community where local residents’ efforts resulted in the creation of a Mother Road museum.

The community of Chandler rallied around an abandoned National Guard Armory, turning a potential eyesore into the state-of-the-art Route 66 Interpretive Center. The massive, fortress-like building was constructed in the 1930s as a Works Progress Administration project. After the local National Guard unit moved into a new facility, the structure stood empty, quietly decaying for decades while residents tried to figure out what to do with it.

Through the efforts of dedicated volunteers, the Armory – which has 20-inch-thick stone walls that reportedly can withstand a tornado – resisted the strong winds of time and neglect, and in 2007, the building reopened as the Route 66 Interpretive Center.

Among the attractions at the museum is a series of exhibits that allow visitors to view sleek video displays about the road from vantage points evocative of its history: the seats of a World War II-era Jeep, a Model A, a vintage Mustang or even a replica of a bed from the mythical Forty Winks Motel. The videos cover such subjects as vintage postcards, neon lighting, vanished icons, current roadside attractions and the alignments of Route 66.

Thanks to the informative and eye-catching exhibits at Oklahoma’s three top-notch Route 66 museums, travelers unfamiliar with the old road have a perfect entry point into the history and character that for years have made the highway a destination for adventure seekers across the country and around the world.