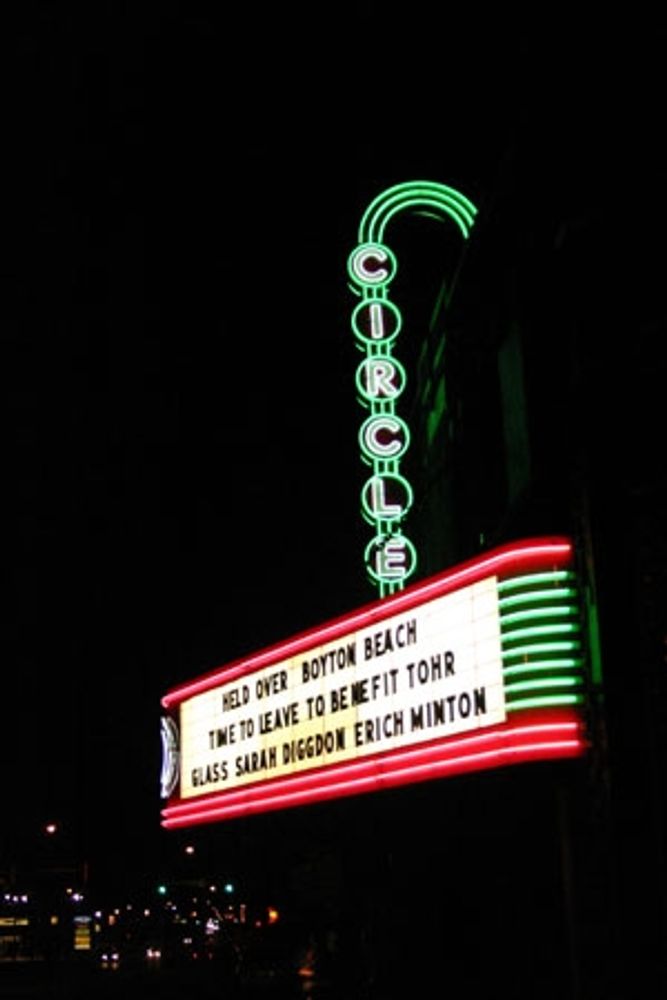 Oklahoma has a good number of major movie multiplexes bringing us the biggest and best major movie studio fare year-round. But for those who admire films that may not be as commercial as those multiplexes present, cinema-goers can find their fix of fine film on the big screen at two stellar venues.

The Circle Cinema in Tulsa and Oklahoma City’s Samuel R. Noble Theater in the Oklahoma City Museum of Art both screen foreign, art and independent films daily. The Oklahoma Film Critics Circle honored two visionaries working diligently to bring high-quality, complex films to the state’s two largest cities by jointly awarding them the Tilghman Award in 2009.  The recipients were Circle Cinema Foundation President and Co-founder Clark Wiens and OKCMOA Film Curator Brian Hearn for their contributions to the advancement of film in the Sooner State.

The award is named for William Matthew "Bill" Tilghman (1854-1924), the subject of the 1999 film, You Know My Name, starring Sam Elliott. Tilghman was the first individual to make a film in what is now Oklahoma. Tilghman served as a deputy U.S. marshal and police chief in Oklahoma City, among other law-related positions. He also served as a state senator. In 1908, he made A Bank Robbery, starring real-life bank robber Al Jennings and re-created one of his crimes. This was the first of several films Tilghman set in Oklahoma. In 1915, this lawman-turned-filmmaker made Passing of the Oklahoma Outlaws, again starring actual bad guys and the good guys who chased them. He is known for his attempts to de-glamorize the outlaw villain and for striving to prove there are no outlaw heroes.

There are film heroes, however, and Wiens and Hearn win in that category. Both bring in films that commercial theaters won’t, which is understandable given their necessary-for-survival, blockbusters-to-fill-the-seats approach. Instead of market-driven, the film slates at these two venues are marvelous-driven. Both men enrich their film showings with community partnerships and cultural tie-ins whenever possible.

“Our mission is to use film to foster understanding and appreciation of the diversity of the human experience and create community among the viewers in the restored historic Circle Cinema,” The Circle states on its website.

When The Circle screened Garrison Keillor: The Man on the Radio in the Red Shoes, for example, it did so in partnership with the local National Public Radio station. During an exhibition of stunning works by Harlem Renaissance artists at the Oklahoma City Museum of Art, Hearn screened Been Rich All My Life, featuring The Silver Belles, showgirls now in their 80s and 90s who danced during the same time period at NYC’s famed Cotton Club and Apollo Theater.

“What sets us apart from the local metroplexes is that we are a mission-driven, community-based theater,” Hearn says. “We have a commitment to staying engaged with our community, so we communicate with our audience in a different way from the commercial theaters. We’re committed to doing events and educating as well as showing films.”

The men are as committed to the state’s architectural heritage as they are to its film future. The Noble Theater retains many architectural and design elements of The Centre Theater, the 1947 movie palace that once screened films on the museum’s current site. Stephanie LaFevers, executive director of the Circle Cinema Foundation, says that the second phase of founder Clark Wiens’ restoration of Tulsa’s Circle Cinema, built in 1928, will add 350 seats and two screens to the now one-screen Circle Cinema 2. The theater’s original pipe organ has been found and restored.

“Clark is quite the visionary, and his enthusiasm for this project is contagious,” LaFevers says. “When you hear the excitement in his voice and see how far we’ve come in just five years, you can’t help but get excited yourself.”

While I love the thrills of blockbuster movie magic as much as anyone, variety is the spice of life, including motion pictures. In The Circle and The Sam Noble screening rooms, independent and foreign bring film finesse to Oklahoma cinephiles. Dim the lights. Cue the projection. We’re ready.