Sweeping Down the Plain

Make an eco-friendly visit to Weatherford’s wind farms and other attractions. 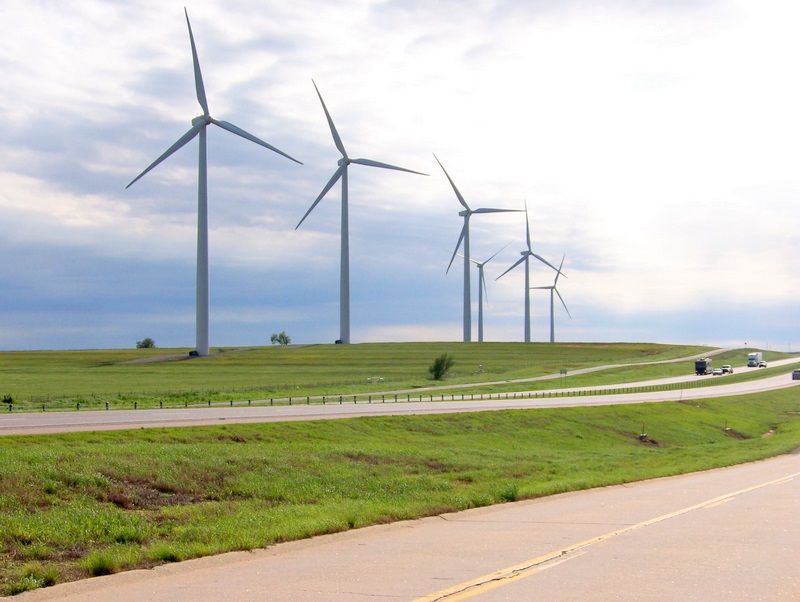 Driving west on Route 66 in western Oklahoma, our car’s instrument reads 58 miles per gallon. We’re riding in a 2000 Honda Insight, one of the most fuel-efficient hybrid cars, even a decade after its introduction.

Over a rise, we suddenly see them – dozens of wind turbines gracefully turning in the breeze around Weatherford. Our green car has met a green energy source.

FPL Energy built most of this wind farm, the Weatherford Wind Energy Park, in 2005. The total number of turbines will be 98 when it’s through. Each turbine stands more than 300 feet tall and generates 1.5 megawatts. During a typically breezy day, the wind farm will produce enough electricity for 44,000 homes.

The turbines are inaccessible, located behind a fence for security reasons. But you can drive within a few hundred feet on local roads. Not only do the wind turbines deliver clean energy, but they’re relatively quiet too – the only thing you hear is the low hum of the generator inside and the whisper of the blades cutting through the air.

To get a better sense of a turbine’s scale, one of the blades lies near a Weatherford Wind Energy Center kiosk next to City Hall. The blade’s base is nearly as tall as we are, and we have to back up to the other side of the parking lot to fit its considerable length in our camera’s lens.

During a typically breezy day, the wind farm will produce enough electricity for 44,000 homes.

The Heartland of America Heritage Museum offers guided tours of the wind farm by appointment. But after your tour ends, stick around. The museum, which feels like a large antique store and a time warp, displays a large collection of artifacts from the 19th century to the 1950s. Amid re-creations of a frontier medical office and an old-time general store are oddities such as a cobra in a bottle of whiskey, wheat art and a specimen of fecal profundus globus (ask museum volunteers about it). The museum is a lot of fun, and its collection might spark old memories, too.

One of the museum’s newest additions is the beautifully restored Porter House Café, a tiny Valentine-style diner that operated on Route 66 in Weatherford for decades. One of its claims to fame is that Elvis Presley ate there several times during road trips to Las Vegas. The diner includes his autograph in a guestbook from 1960, along with his written comment of “Cool Daddy.”

The Heartland Museum also boasts an original one-room schoolhouse and an old-time blacksmith shop. The latter has been hooked up to a small wind turbine to provide electricity; locals know a good power source when they see it.

It doesn’t take a leap of logic to see how America’s space race during the 1960s impacted the aerodynamic design and technology of Weatherford’s wind turbines. A visit to the Stafford Air and Space Museum seems to be in order.

The Stafford Museum, named after Apollo 10 astronaut Lt. Gen. Thomas B. Stafford, a Weatherford native, contains more than 40,000 square feet of exhibit space. It needs all that space just to display gigantic artifacts such as the Saturn V and Titan II rocket engines and a deceptively big replica of the Wright brothers’ first airplane. It’s a fascinating and thorough overview of space exploration, even if the shrimp cocktail crammed into a squeeze bag for the purpose of space flights doesn’t look terribly appetizing.

The Stafford Museum constantly evolves. It houses a bank of computerized flight simulators, where you can test your wings on World War II planes to modern fighter jets. And if you’re lucky, you might see Stafford himself. He visits the museum at least once a month.

Although the supply of wind seems endless in Weatherford, by now we’re feeling a bit low in our energy reserves. Lucille’s Roadhouse restaurant becomes an ideal place to refuel.

The exterior design of Lucille’s Roadhouse is inspired by the historic but now-closed Lucille’s gas station on Route 66 in nearby Hydro. Inside, Lucille’s Roadhouse contains a steakhouse on one side, and The Grill – with lots of chrome, glass bricks and neon lighting as decor – on the other.

The Grill offers home-cooked meals in addition to usual diner fare. We figure its well-regarded chicken fried steak with gravy and a side of veggies will top off our tank for another 250 miles or so . . . maybe even to our Insight's next fill-up.