The Choctaw and Chickasaw Heritage Corridor offers a unique look at the history of these two tribes. 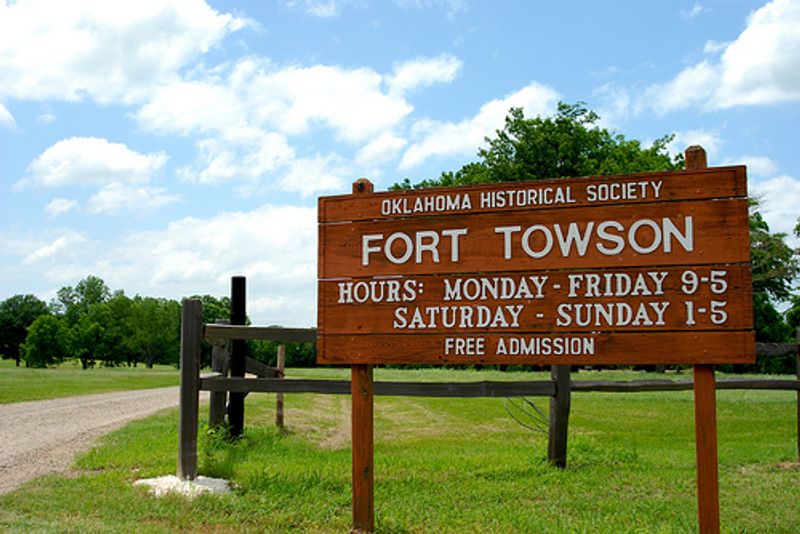 Built in 1824, Fort Towson was on the border between two countries – the U.S. and Mexico.

From early history, the fates of the Choctaw and Chickasaw Nations have been closely bound. The Chickasaw homelands in western Tennessee, Kentucky and northern Mississippi brought them into close contact with the Choctaw in central Mississippi.

With removal to new homes in Indian Territory, the nations remained neighbors sharing the struggles of rebuilding their lives in present-day Oklahoma.

Take a road trip through southeastern Oklahoma and trace the Choctaw and Chickasaw Heritage Corridor as you stop at points of interest that were significant to the tribes' history along the way.

Wheelock Academy, founded in 1833 in a log cabin, was built in Millerton by missionaries Alfred and Harriet Wright. The school was named for Eleazar Wheelock, founder of Moor’s Indian School in New Hampshire, later known as Dartmouth College. The school became a model for Indian academies with curricula including the classics, arts and vocational training. The academy closed in 1955.

Pushmataha Hall at the academy has been listed on the National Trust for Historic Preservation’s “Eleven Most Endangered” list. Adjacent to the academy grounds is the Rock Church built by the Choctaws and dedicated in 1847, the oldest church in Oklahoma. There is a museum with photos and artifacts from the school, open Monday through Friday from 9 a.m. to 4 p.m. The church is open by appointment.

With the 1820 Treaty of Doak’s Stand, the Choctaws in Mississippi agreed to exchange some of their Mississippi land for land in Indian Territory. The Army, anticipating problems between the Choctaw, white settlers already living in the area and raiding Plains Indians, built Cantonment Towson (1824) on Gates Creek near the confluence of the Red and Kiamichi Rivers.

From early history, the fates of the Choctaw and Chickasaw Nations have been closely bound.

The post was abandoned in 1828, and reactivated in 1830, following the Treaty of Dancing Rabbit Creek. The fort became critical in the 1830s for its position on the U.S. border with Mexico. It was officially closed in 1856, but served as a command post for the Confederate Army. Fort Towson Historic Site is open from 9 a.m. to 5 p.m., Monday through Friday, and Saturday and Sunday, 1 to 5 p.m just one mile northeast of the town that was named in its honor.

The Doaks brothers came to the area in 1821 and built a trading post on the Red River. As more Choctaws moved into the territory, the trading post flourished, and a town was established. It was here that the agreement between the Choctaws and Chickasaws was signed in 1837. The town functioned as the Choctaw capital for several years.

Doaksville began its decline with the closing of Fort Towson. When the railroad located south and the Choctaw relocated their capital to Tuskahoma, Doaksville fell into disrepair and all but disappeared. Archaeological digs in 1995, 1996 and 1997 helped uncover the town’s history. A walking trail winds through the town site, and extensive signage helps visitors envision the town.

General Zachary Taylor saw the need for a fort west of Towson to better protect the Chickasaws from western tribes who considered the area part of their hunting grounds. Established in 1842, Fort Washita served as a jumping off point for the Mexican-American War. In the 1850s, the fort saw many gold-seekers pass by on the southern route to the California gold fields.

Federal troops abandoned the fort at the start of the Civil War and Confederates immediately occupied it. Following the Civil War, the Army turned the property over to the Department of the Interior and, subsequently, to members of the Chickasaw Nation, before it become an Oklahoma Historical Society site in 1962. The site is open from 9 a.m. to 5 p.m. Monday through Saturday and Sundays from 1 p.m. to 5 p.m.

A museum on the site now houses exhibits on Chickasaw life in the Mississippi homelands, as well as life in Indian Territory. The Chickasaw Council House Museum is located in Capitol Square, just east of the building which served as the Chickasaw Capitol from 1898 until 1907. The Council House Museum and Capitol are open from 8 a.m. to 4:30 p.m. Tuesday through Friday and from 10:30 a.m. to 4 p.m. Saturdays.