Travel to the vibrant, small city of Weatherford in western Oklahoma for a dose of Route 66 history, great food and a museum experience that’s out of this world. 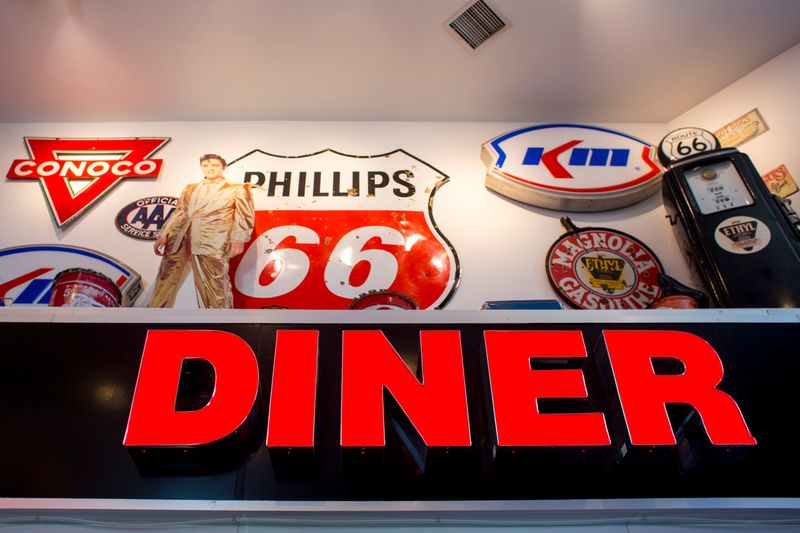 Located an hour west of Oklahoma City on I-40, Weatherford was opened to homesteaders on April 19, 1892, and took its name from the town’s postmaster, Lorinda Powell Weatherford, around 1900. From its beginning as a farming and ranching community, this small city has grown to include an impressive stretch of Route 66, Southwestern Oklahoma State University (SWOSU) and the world-class Stafford Air & Space Museum, which chronicles the career of Weatherford native and U.S. astronaut Thomas P. Stafford. Come along on a tour of Weatherford and explore some must-see attractions.

Get a glimpse of the past at the Heartland of America Museum. The main building, visible from I-40, offers 12,000 sq ft of exhibits chronicling life in western Oklahoma from the late 1800s through the 1950s. Explore 32 major historical exhibits and nearly 40 aisle cabinet exhibits ranging from automobiles (including a pristine 1931 Ford Model A) to the legendary Mother Road. Also located on the museum grounds is a 1930s-era blacksmith shop, a one-room school house and a historic Route 66 diner where Elvis Presley ate three times.

Anyone driving through Weatherford will notice the giant wind turbines lining the highway, and you can learn more about their construction and use at the Wind Energy Park. Open daily by appointment, which can be arranged through the Heartland of America Museum, this unique attraction offers a slide show presentation showing construction of a wind turbine unit from start to finish, a question and answer session, and a visit to the wind turbine site.

No trip to Weatherford is complete without visiting the Stafford Air & Space Museum to view Smithsonian-quality exhibits and pay tribute to the city’s most famous native, Lt. General Thomas P. Stafford, born in 1930. From his parents - the town dentist and a pioneer woman who came to Oklahoma via a covered wagon in the early 1900s - Stafford formed lofty ambitions and went on to fly four historic space missions as a NASA astronaut.

Among the museum’s 3,500 artifacts, visitors will see one of the few actual Titan II rocket launch vehicles, as well as a Gemini flight suit, the actual flight pressure suit General Stafford wore on Apollo 10, as well as flown aircraft like a Russian MiG21R and an F16. There are also full-size replicas of the Wright Flyer, Spirit of St. Louis, Apollo Command Module and Gemini spacecraft. For anyone inspired by space travel, this fascinating museum is a must-visit.

After a day of exploring, refuel at Lucille’s Roadhouse, a Route 66-themed 1950s diner complete with polished chrome seating, glass brick and colored lighting. On the outside, Lucille’s sports vintage gas pumps mimicking the original Lucille's, a now-closed historic gas station a few miles down Route 66.

Diners come from all over to try the restaurants hand-breaded chicken fried steak and homemade mashed potatoes, but they also offer upscale options like hand-cut Angus steaks. Pair your meal with one of their incredible 16 beers on draft, featuring four major Made In Oklahoma breweries, as well as a host of daily specials.

For more uniquely Weatherford experiences, head over to the city’s page!