Plan your Fourth of July holiday and honor the red, white and blue with this list of patriotic events and fun festivals. From big city events in Oklahoma City and Tulsa to hometown celebrations, find your ideal 4th of July here. 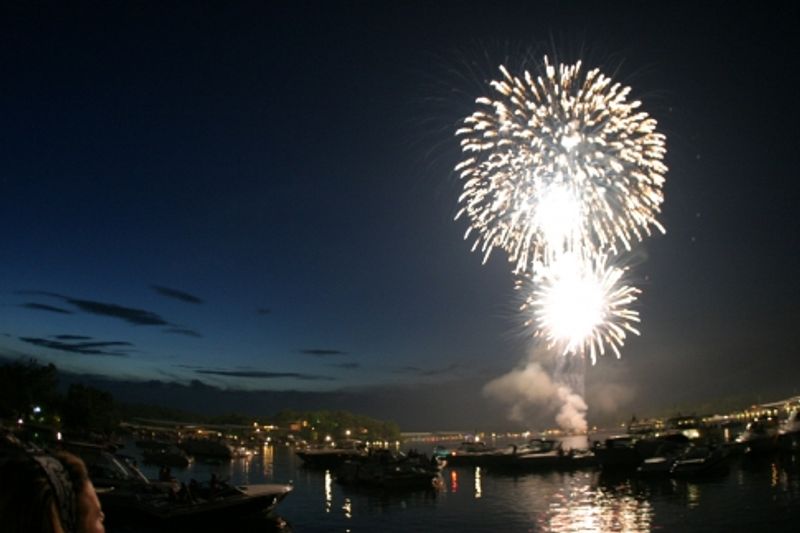 A fantastic pyrotechnic display of Independence Day fireworks rewards visitors to the Grand Lake Fireworks extravaganza each 4th of July.

The allure of bright sparklers playfully gripped by tiny hands, cool and crisp watermelon on a hot July day and clear night skies filled with twinkling fireworks of every shade and hue have captivated generations of Americans each Independence Day. From large-scale festivals in Oklahoma’s cosmopolitan centers to old-fashioned jubilees up and down the state’s nostalgic, small-town Main Streets, Oklahoma is ready to host your July 4th celebration this year.

For one of the largest and most renowned Independence Day celebrations in the nation, point your compass toward the Oklahoma City suburb of Edmond and attend this year’s LibertyFest celebration. Recognized by CNN and USA Today as one of the top ten July 4th festivals in the nation and featuring Oklahoma’s largest hometown 4th of July parade, LibertyFest should be at the top of any Independence Day to-do list. Show up for the free watermelon feed, live entertainment and plenty of children’s activities, and make sure to stick around for Parkfest to witness the largest fireworks display in the Oklahoma City metro area.

Join thousands of patriotic revelers along the banks of northeast Oklahoma’s winding Arkansas River for the annual FreedomFest festivities in the heart of Tulsa. Held throughout Tulsa’s River Parks, FreedomFest is a haven for Fourth of July family picnics, scrumptious festival food concessions and live music performed by a variety of local bands. With three entertainment locations along the river, face painting and inflatables for the kids, and one of the largest free fireworks displays in Oklahoma, FreedomFest has your Independence Day entertainment needs fully covered.

A Celebration in the Heartland – Moore

Gather up the whole family and head to this year’s A Celebration in the Heartland in Moore for a top-notch July 4th bash. Kids will love the giant sand pit and children’s art tent, while the adults will enjoy cruising through the annual car, truck and motorcycle show and various vendor booths set up throughout the festival grounds. Take a spin on a carnival ride before heading to food row for spicy barbecue, grilled onion burgers, sweet cinnamon rolls and much more.

Start your Fourth of July off right with a visit to the Yukon City Park for a children’s parade, crafts, free swim and plenty of games perfect for the little ones. Freedom Fest in Yukon kicks into gear in the evening with free watermelon, free ice cream and live music throughout the city’s popular Chisholm Trail Park. Stick around until after the sun sets for spectacular fireworks and a special patriotic performance by the Oklahoma City Philharmonic orchestra.

For old-fashioned fun, hometown pride and as many fresh, sweet, plump blackberries as you can eat, visit the city of McLoud’s annual Blackberry Festival, one of the longest-running July 4th events in the state of Oklahoma. Enter the blackberry cobbler-eating contest, check out the blue ribbon-winning entries in this year’s blackberry baking contest, or see which lucky girl is crowned Blackberry Queen. A car show, living history demonstrations, carnival and fireworks round out the activities.

Held for more than 50 years and featured in Trivial Pursuit, the Guinness Book of World Records and Ripley’s Believe It or Not, the Watermelon Seed Spittin’ World Championship in Pauls Valley is a unique way to spend your Fourth of July. Enjoy a fireworks show, hot dogs and live music while watching contestants try to break the record established by Jack Dietz of Chicago in 1989 of 66 feet 11 inches.

From turtle races and horseshoe games, to bubble gum blowing contests and water balloon fights, Pawnee’s July 4th Games will delight children of all ages. Known for old-fashioned fun at its best, the annual July 4th Games is held on the lawn of the historic Pawnee County Courthouse and features an egg-toss, boot-toss, sack races, tug-of-war tournaments, tricycle races and more. Watch the parade wind through downtown at noon and then head over to Pawnee Lake for fireworks at dusk.

This Fourth, head to the annual Duck Creek Fireworks celebration for plenty of fun in the sun along the shores of picturesque Grand Lake in northeast Oklahoma. When evening draws near, lift your gaze skyward for the popular War Bird flyover and then wait until after the sun sets over Grand Lake for fireworks synchronized to patriotic music.

This event is a patriotic celebration for the ages. The finale to a day of fun on Boomer Lake in Stillwater is a traditional fireworks show at dusk. In between swimming and boating, Boomer Blast also includes events the whole family will love. Check out the fishing tournament, listen to live music and let the kids have fun on the giant inflatables. A day full of fair food and festival activities is capped off by the dazzling fireworks display synchronized to music.

See All 4th of July Events in Oklahoma