Put on your retro traveling shoes and make an expedition into the future’s past with a tour of Oklahoma City’s mid-century architecture. 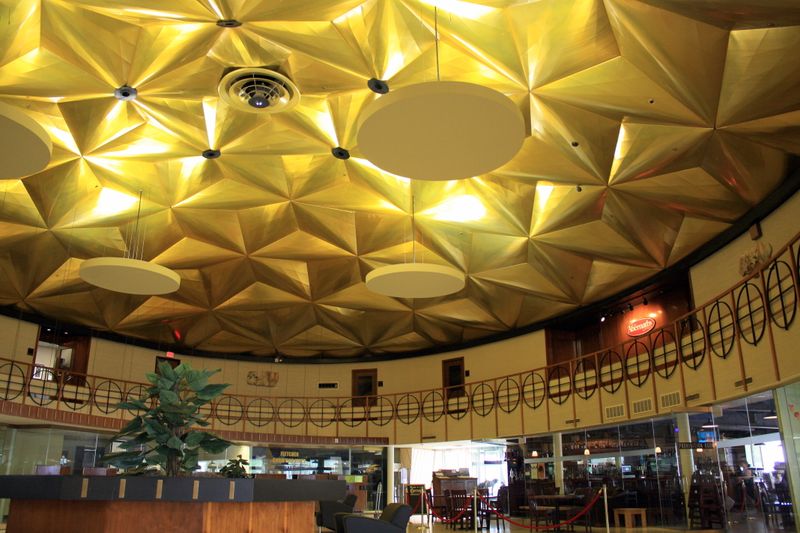 Oklahoma City's iconic Gold Dome is a geodesic marvel inspired by the designs of renowned architect Buckminster Fuller and is considered to be one of the best examples of its type of architecture in the nation.
Photo Credit: Shauna Lawyer Struby

Just as a passion for the ultimate road trip continues to drive thousands of folks along Oklahoma’s portion of Route 66 in search of blast-from-the-past adventures, another niche of nostalgic travelers are on the prowl for a different kind of adventure, seeking out stellar examples of mid-century architecture.

Steeped in the space-age optimism of the mid-century modern aesthetic, buildings built from roughly 1945 to 1965 were often characterized by clean, sleek lines and an open feel, and while a portion of the buildings featured what some might call downright far-fetched characteristics, others would see the same features and call them visionary. To aficionados of the style, its aura is a mesmerizing Atomic Age siren call, and checking out vintage mid-century treasures while traveling is a kind of scavenger hunt that transports travelers to a time when a brighter, fresher world of tomorrow was sprouting up all around.

“Post-World War II, the whole complexion of the world changed. It was a leap forward and a major shift that crossed all aspects of our culture. From furniture to cars to our homes and buildings, the U.S. was manufacturing and building using different materials across a wide range of industries. It was a time full of possibility,” says Stan Carroll, an Oklahoma City architect and a prominent leader in the fight to save the capital city's iconic Gold Dome, a mid-century building spared the wrecking ball in 2002.

People saw soaring dreams of the future in the mid-century style.

Speaking of the Gold Dome, this geodesic marvel inspired by the designs of renowned architect Buckminster Fuller, is considered to be one of the best examples of its type of architecture in the nation. Burnished and restored to its former glory, today the Gold Dome is experiencing a second life as an office building. It stands as a preservation symbol at the entryway to Oklahoma City’s bustling Asian District and is a highly prized stop on the city’s portion of Route 66.

Carroll says the appeal of mid-century icons such as the Gold Dome crosses cultures and perhaps lies in the unique reflection of what people at the time thought the future would hold.

“People saw soaring dreams of the future in the mid-century style. They could see all these giant, innovative changes around them in such things as television, in appliances that made life easier, in manufacturing and building. That richness of culture and vision is still reflected in the mid-century style today, and people love that, perhaps because they feel a connection to the promise of that time,” he says.

In Oklahoma City, a surprising wealth of mid-century buildings makes for a fun tour. Check out these jewels and be sure to snap plenty of photos for your album: