Mysterious lights, hexes, traveling mummies and even Bigfoot himself have all earned their place in Oklahoma’s lexicon of urban legends. 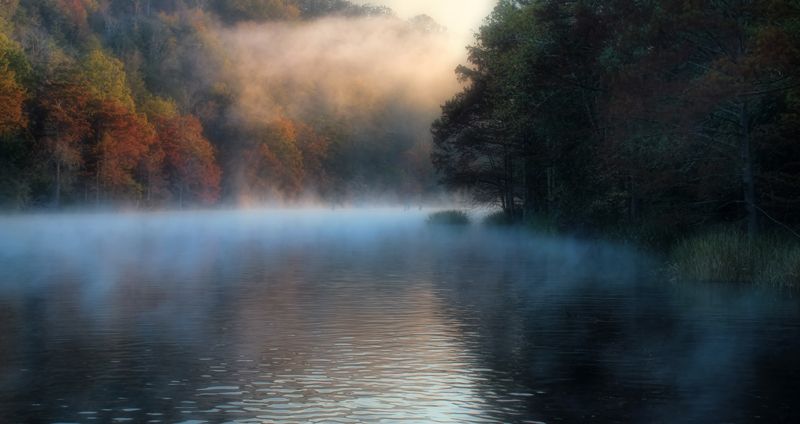 In a world where oral tradition can add mystery to any tale, Oklahoma’s rich and unique history has spawned a variety of chilling tales and urban legends. From circus mummies and mysterious energy portals to ghostly apparitions and tales of magnetic forces, Oklahoma is ready to grab hold of your imagination and take you on a spine-tingling ride.

Elmer McCurdy is more famous for what happened after his death than anything he did in life. Many people believe he was an outlaw, a drunk and part of a notoriously incompetent gang that roamed Oklahoma and the surrounding states during the turn of the century. By all accounts, Elmer should have been forgotten after he was killed during a shootout in 1911.

Instead, Elmer’s corpse was taken to a funeral home in Pawhuska, Oklahoma where an undertaker decided to embalm the unclaimed remains. He charged visitors a nickel to see the “mummy” for several years before a circus man, claiming he was McCurdy’s relative, swindled the funeral home into selling him McCurdy’s corpse. Afterwards, the body was bought and sold numerous times as part of a variety of freak shows, carnivals and traveling acts for decades.

In the 1970s, his remains made their way to Long Beach, where they were put on display at an amusement park. The popular television show “The Six Million Dollar Man” was filming at the park in 1976 when a crew member moved what he thought was a mannequin and broke one of the arms off, proving without a doubt that it was an actual man. After some research, the body was identified as Elmer McCurdy and finally buried in the Boot Hill section of Summit View Cemetery in Guthrie on April 22, 1977 after more than 60 years on the road. The local medical examiner ordered that two cubic yards of concrete be poured on top of Elmer’s grave, ensuring that his remains will never be disturbed again. Murder Mystery Weekends at the Stone Lion Inn sometimes include a visit to the grave.

Witness a roadside attraction that seems to defy the forces of gravity by driving to Springer’s famous Magnetic Hill. If you park your car at the bottom of the hill on Pioneer Road and put it in neutral, you’ll feel your car being pulled uphill as you let off the brake. Many explanations are given for this fun mystery. Locals think that the ghosts of car crashes past are the ones moving your car away from where they died. There are also tales of a magnetic force in the area strong enough to crash a plane. Located just off I-35 between Ardmore and Davis, Pioneer Road is in a rural area and it is advised that someone look out for traffic on the side of the road while attempting to be “pulled” up Magnetic Hill.

Bigfoot stories have been a staple of southeast Oklahoma for decades. In fact, the heavily forested area is said to be one of the most active for Bigfoot sightings in the country. One of the first sightings occurred in 1970, when a group of local high school kids decided to cruise the foggy back roads near Talihina after an evening pep rally. They pulled over and one of the teenage boys wandered away from the group and into the edge of the surrounding forest. It was here that he caught a glimpse of what the locals later dubbed the “Green Hill Monster" of southeastern Oklahoma – a hideous creature several feet taller than a human and covered in long, matted hair.

The boy ran back to the car in fright and the group quickly sped away down the road that lead back to town. After they reported the sighting to the police, the local sheriff investigated the area. He found several dead deer in the vicinity and immediately forbid anyone from going into the woods at night for fear of an attack. The creature was never caught. You can hear more terrifying encounters and personal accounts of the mysterious Green Hill Monster at the Honobia Bigfoot Festival & Conference that takes place near Beavers Bend State Park each year.

According to local legend, a Catoosa woman raced across old Boggy Creek Bridge on Friday June 13, 1924. A fierce storm had broken out and the woman was trying to hurry home – the only other passenger: her newborn baby, which rested in the seat beside her. As mother and child crossed the bridge, a crackle of lightning frightened the horses that were pulling her carriage. They bucked wildly and tipped the carriage over.

During the chaos, the mother lost hold of her infant. As she frantically searched the bridge yelling for help in the pouring rain, she heard her baby let out a cry from the river below. She leaned over the edge of the damaged bridge, and in doing so, lost her footing and fell into the river. The mother and child were never seen again.

It is said that if you go out to old Boggy Creek Bridge on Friday the 13th, you can still hear the baby crying. Each year following the accident, roses were placed at two unmarked graves near the bridge, but ceased after “Bessie” and “Clissie” were written on the headstones decades later. The bridge was bypassed in 2001 and is not open the public, but is still clearly visible from Keetonville Road.

Numerous local legends have tried to explain the phenomenon.

Located near the Missouri border in the northeastern part of the state, the small town of Peoria is home to a big legend. Reports of the mysterious “Spook Light” have plagued the area for hundreds of years without any concrete explanation despite numerous investigations. Some credit the flickering orbs seen at night to gas and mineral deposits and refracted headlight beams, but all have been discredited upon further examination.

Numerous local legends have tried to explain the phenomenon. Everything from star-crossed lovers who leapt to their deaths to a Civil War soldier who was struck in the head by a cannonball are credited as possible paranormal sources for the anomaly. One of the more popular theories is that a local miner, who tragically lost his head in a mining accident, is now wandering the area by lamp light searching for the lost appendage. The only thing known for certain is that the Army Corps of Engineers described the Spook Light as a “mysterious light of unknown origin” in 1946 and it has remained the best explanation ever since.

The famous Tulsa Hex House lives on in the city’s annual Hex House haunted attraction, one of the scariest Halloween haunts in the state. The original legend begins with Carol Ann Smith, a woman who went by several names in the Tulsa area in 1944. After noticing some suspicious behavior, the police searched Carol’s house at 10 E 21st St and found two women living there as “religious slaves” in the dark and unheated basement. Supposedly under hypnosis or some kind of hex, Carol forced them to live in cages with barely any food for over seven years. They were only allowed outside to go to work and even gave Smith their paychecks at the promise of great rewards.

Smith lived off several life insurance policies she had been collecting under suspicious circumstances. It is widely believed she planned on taking out insurance on the two women as well. Smith was never charged with murder, but did jail time after the investigation. Upon her release, she fled the state. The house was a popular spooky site visited by teenagers until it was torn down in 1975. The basement is supposedly still intact under a paved parking lot, and the story lives on as the inspiration for Tulsa’s Hex House haunted attraction.

Beaver Dunes Park in Oklahoma’s panhandle is known as a great place for ATV riding with over 300 acres of sand dunes. It is also notoriously called “Oklahoma’s Bermuda Triangle” for strange occurrences dating back to the times of the Spanish explorer Coronado. Native Americans tried to warn Coronado of the perils of the dunes, but he didn’t listen. Three of his men disappeared into paranormal flashes of green light while exploring the area without any sign (according to Coronado’s journal). Ever since, there have been accounts of other people who have simply vanished into a mysterious alternate dimension in the same way. No definitive explanation has even been given, but it is often thought that the poor souls are unfortunate victims of what has since been named Shaman’s Portal.