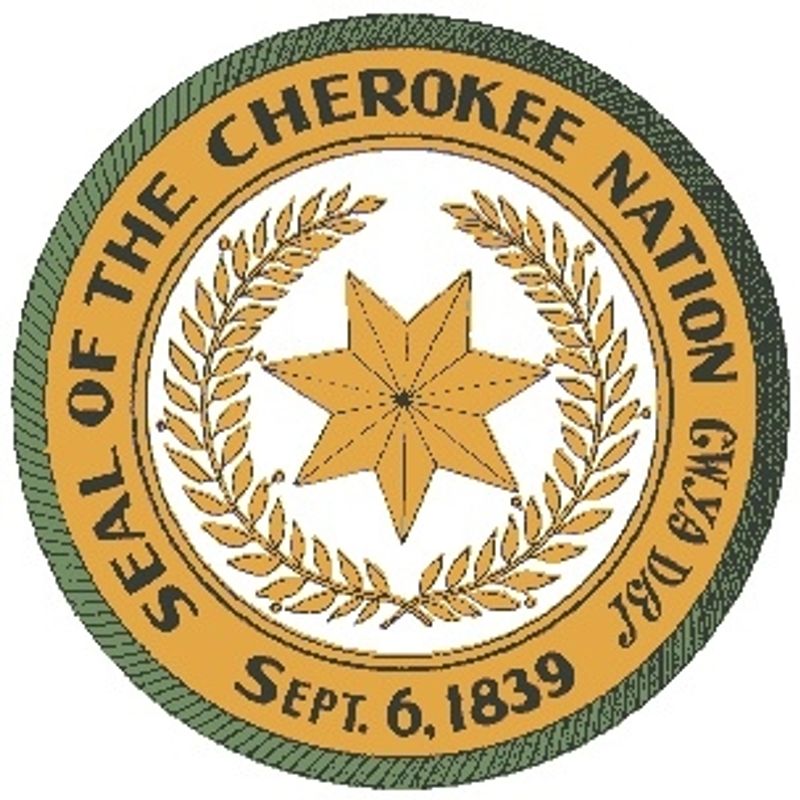 The official seal of the Cherokee Nation.

The Cherokee Nation, headquartered in present-day Tahlequah, consists of descendents from members of the old Cherokee Nation who were forced to relocate to Oklahoma, formerly known as Indian Territory. Today, the Cherokee Nation is thriving once again with over 280,000 members enrolled in the nation and over 180,000 living within Oklahoma’s borders. With a dedication to the preservation and promotion of Cherokee history and culture, the Cherokee Nation is firmly committed to helping people in their search for their Cherokee ancestry. If you think you might be Cherokee, the question becomes, “Where do you start?”

Continue gathering information until you can go no further, and then start organizing your information on basic pedigree charts and family group sheets. Make sure to include as much information as possible. Helpful categories include full given and maiden names, complete dates of birth, death or marriage and complete locations such as city, county and state. Armed with this treasure trove of information, it’s time to start researching your Cherokee roots!

History of Cherokee Records and Rolls

It is important to note that the Cherokees did not have a written language until 1821 and they did not begin keeping written records of deaths or marriages until well after that time. The first documentation of tribal members by individual name was conducted by the United States government in 1817 with the Reservation Roll and the 1817-1835 Emigration Rolls. These rolls contained limited genealogical information and only listed head of households and numbers of family members. Similar such rolls and records include a Cherokee census of 1835, an 1848 census, the 1851 Drennen roll, 1851 Old Settlers and the 1851 Siler Rolls, among others between 1851-1896.

After removal to Indian Territory, the Cherokee Nation formed districts and built courthouses. Within the boundaries of the Cherokee Nation, nine districts were created. These districts included Cooweescoowee, Delaware, Canadian, Flint, Goingsnake, Illinois, Skin Bayou (later Sequoyah), Saline and Tahlequah. Each district contained a courthouse, which kept records such as marriage, estate, probate, will, court, estray and more on file. These records are known for being intermittent; however, they remain kept on microfilm as Cherokee National Records.

The Dawes Act, passed by Congress in 1887, called for the allotment of land for all Native peoples in the United States. After many Cherokees refused to come forward to receive their land, Congress passed the Curtis Act in 1898 that forced the Cherokees to accept land allotments. To qualify for Dawes, a person had to prove they were legal residents of the Cherokee Nation and had to be listed on the 1880 and/or 1896 Cherokee Nation censuses. Actual applications for the Dawes Final Roll were made from 1900-1902 and the roll was finalized on March 4, 1906.

The 1906-1909 Guion Miller Roll, while not determining citizenship into the Cherokee Nation, is worth noting based on its genealogical importance and wealth of information contained within its pages. The Miller Roll, which organized monetary payments from the U.S. to a handful of citizens, contains genealogical information such as full names, parents’ names, grandparents’ names, dates of birth, places of birth, English and Cherokee names, dates of death, names of applicant’s brothers and sisters, residence in 1851 and more.

Now that you have gathered as much of your family history as possible and have a working knowledge of Cherokee records, it’s time to dive right in and search for your Cherokee roots! The Cherokee National Research Center is one of the best resources for beginning your journey into the exciting and rewarding realm of Cherokee genealogy. With resources detailing the Cherokee people from the Trail of Tears (1838-1839) to the Dawes Enrollment (1900-1906), the Cherokee National Research Center is able to help visitors with Cherokee documents, family histories and personalized research. As an added bonus, genealogists are on staff to help provide research into your family tree.

Some of the resources available at the Cherokee Family Research Center include:


A complete list of the library’s holdings is available at CherokeeHeritage.org.

Visitors may also enlist the help of staff genealogists to complete the research on their behalf. Staff genealogists are available for an hourly fee. Specific research requests require an appointment. Bring all related family research materials and gathered documentation with you to the appointment.

Donations are always appreciated as they help maintain the library and ensure future resources can be added to the library’s holdings.

Research requests can be submitted here.

Cherokee Nation related records are available on microfilm and can be found at the following locations in Oklahoma:

The Oklahoma Tourism & Recreation Department would like to extend special thanks to Gene Norris, Senior Genealogist at the Cherokee National Research Center, as well as to the entire staff for their assistance, time and resources that made this online guide possible. Wado!