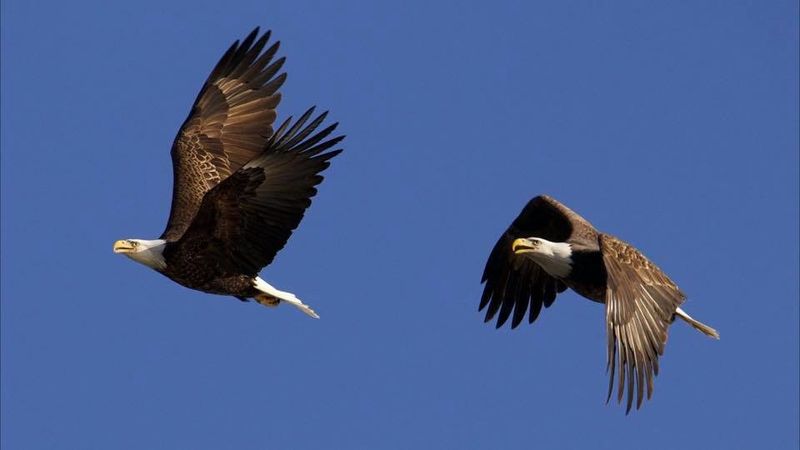 As the chilly veil of winter spreads across the plains, hundreds of bald eagles make their way to Oklahoma. The winter months are the perfect time to head out on a crisp, clear day in search of the approximately 800-2,000 magnificent eagles that call the Sooner State home during the season’s peak. Migrating south to Oklahoma from Canada and the northern states in search of warmth, these noble birds join nearly 80 pairs of bald eagles that are year-round residents of Oklahoma, creating a birder’s paradise filled with boundless eagle-viewing opportunities.

The bald eagle’s trek into Oklahoma begins in November and early December, then peaks in January and February, when numerous bald eagle watching events pop up around the state to take advantage of the increased numbers. Primarily a fish-eater, the bald eagle prefers to settle near Oklahoma’s lakes and rivers for easy access to food. Groups of eagles will rest together, or “roost,” in trees along the shores, with the same roost trees being used each year.  With seven foot wingspans and bright white crowns, the grand size and distinguished appearance of these birds make them easy to spot and watch. As birders have long known, watching a bald eagle in its daily routine is awe-inspiring.

Wear warm, neutral-colored clothing and appropriate outerwear. Winters in Oklahoma can be cold and windy, so bring along a warm coat, gloves, hat and scarf.

Bring your binoculars and hiking boots to the Sequoyah National Wildlife Refuge and venture out to spot southern bald eagles on the nest. Located along the upper half of the Robert S. Kerr Reservoir south of Vian, the refuge is known for its winter eagle sightings along numerous hiking trails and observation areas scattered throughout the park. This picturesque area of northeast Oklahoma is a haven for a variety of wintering birds and wildlife with plentiful shoreline, river bottoms and wooded swampland.

As an added bonus, visitors are invited to sign up for the annual Eagle Tour & Loon Watch events, which take place weekly from late January to early March. Start the tour by viewing the refuge’s live webcam which documents the lives of the eagles that occupy a nearby nest. Operated by the George M. Sutton Avian Research Center, the webcam documents the adult bald eagles, their eggs and eaglets. Observe the eagles on the webcam and then take off on the park’s 25-person tour bus to go search for them in the wild.  Afterwards, head over to neighboring Tenkiller State Park for more eagle and loon watching.

A favorite fishing area for migrating bald eagles, Keystone Lake consistently attracts eagles each winter to its eastern shores. Located on the Arkansas River about 23 miles west of downtown Tulsa, Keystone Lake and Keystone State Park offer numerous opportunities to see eagles as they dive for fish around Keystone Dam or as they soar above the park’s lakeside, wooded hiking trails. Make your way over to the Eagle Overlook Platform in the Brush Creek area below the dam to watch as these elegant creatures capture fish in the calm waters of the lake.

Lake Thunderbird State Park, situated within the bald eagle migration corridor in Norman, hosts roosting eagles between the months of December and February. Attracted by the rolling, oak-covered hills that surround Lake Thunderbird, eagles flock to the park for shelter and a stable food source.

Treat yourself to a leisurely stroll along the park’s trails to seek out the birds yourself or stop by for an informative chat with the staff in the park’s Discovery Nature Center before journeying to several eagle-watching hot spots throughout the park.

The Chickasaw National Recreation Area, a picturesque oasis of outdoor splendor in southern Oklahoma, plays host to a remarkable number of bird species, including the wintering bald eagle. Aided by the park’s proximity to the central flyway and unique location as a transition point between Oklahoma’s eastern hardwood forests and western grasslands, the area consistently attracts eagle populations to Sulphur during the winter months.

Walk along the park’s freshwater streams and the shoreline surrounding the Lake of the Arbuckles to view these roosting visitors, or attend the park’s annual Bald Eagle Watch for access to the area’s optimal viewing areas. The eagle watch begins with a ranger-led program at the Travertine Nature Center and continues with a caravan to search for eagles in the wild. As the afternoon winds down, return to the center to share your viewing experience with fellow visitors while warming up by the fireplace.

Northwestern Oklahoma’s 32,000-acre Salt Plains National Wildlife Refuge includes 10,000 acres of salt flats, as well as wetlands, prairies, woodlands and Great Salt Plains Lake. This diversity of landscape has contributed to the area’s success as a habitat for over 300 species of birds. Designated as a Globally Important Bird Area by the National Audubon Society, the refuge and nearby Salt Plains State Park are excellent destinations for birders, and are prime locations for eagle viewing during the winter months.

Travel along the refuge’s Sandpiper Trail, which begins near the nature center and refuge office, and take a short journey to the edge of the salt flats for eagle viewing from the trail’s birding observation platform. Also, eagle watchers won’t want to miss a trip along the 1 ¼-mile Eagle Roost Nature Trail for an adventure through wooded and open areas, beneath cottonwood trees and past marshes to a bird watching area along Sand Creek Bay.

Located in central Oklahoma between the cities of Edmond and Arcadia, Arcadia Lake offers 26 miles of shoreline that attract bald eagles with plentiful trees and woodland areas, as well as excellent fishing beneath the lake’s still waters. Each year, lake visitors are invited to join the Arcadia Lake Eagle Watch, historically held in January. The event begins in the Arcadia Lake park office, where visitors can see a wingspan display, watch videos about eagles and learn more about the graceful birds before venturing out in search of them on the grounds around the lake. Spotters are available to help visitors find the birds, whether in roosts or soaring over the lake in search of food.

Eagles begin to arrive at Quartz Mountain State Park toward the end of December and remain residents until they depart the Lone Wolf area after the first of March. Head out on the trail and search the tall cottonwood trees located on the northern shore of Lake Altus-Lugert or on the southwest face of Twin Peaks, two areas where the eagles commonly roost. Cast your gaze skyward an hour after sunrise or an hour before sunset to increase your odds of spotting an eagle soaring above the park, or head over to the dam, where eagles are often seen fishing.

Located in the panhandle of northwest Oklahoma, Black Mesa State Park & Nature Preserve offers a glimpse of the golden eagle. Like the bald eagle, the golden eagle migrates to Oklahoma during the winter, but chooses to reside in the far western past of the state amidst the area’s cliffs and cottonwood trees. Instead of eating fish like the bald eagle, the golden eagle feeds on small mammals such as jackrabbits and prairie dogs, making the arid, rugged landscape of Black Mesa State Park an ideal choice for its winter habitat. Hike along the nature trails that wind throughout the park and keep your eye out for the golden eagles that often glide overhead, or take your camera to the banks of Lake Carl Etling, located within the park, to snap photos of the eagles that call the shoreline home.