During the 1920s and ‘30s Route 66 alignments were often primitive, narrow roads. Finding and driving these old alignments can be fun, challenging or both. These older sections of the Mother Road provide an inkling of what cross-country travel was like decades ago. 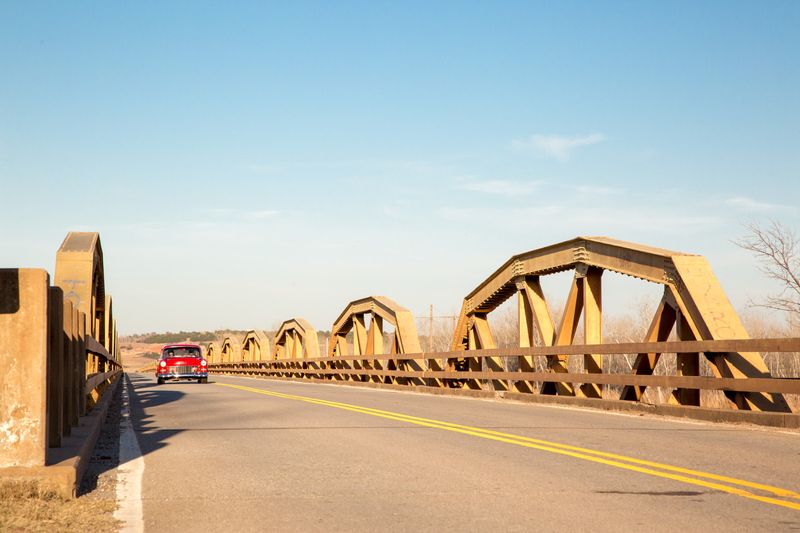 Historic Pony Bridge near Geary made an appearance on the 1939 film “The Grapes of Wrath.”
Photo Credit: Lori Duckworth/Oklahoma Tourism

On a gravel road near Stroud stands a rare obelisk that marked an intersection with the Ozark Trail. This primitive road was Route 66 from 1926 to 1930. The 21-foot-tall stone obelisk on a triangular patch of land is marked with graffiti but still impresses.

At Bridgeport, a suspension bridge spanned the South Canadian River beginning in 1921. This structure, called the Key Bridge, connected Route 66 until 1933, when the Pony Bridge was built to the southeast. Only the pillars of the bridge remain on the river bank. Getting to the ruins requires traveling a 4.3-mile dirt or gravel road that shouldn’t be attempted after a rain unless you have a four-wheel-drive vehicle. This road that carried Route 66 was never paved – and still isn’t.

Pony Bridge - Closed for Renovations
The Pony Bridge is currently closed to traffic for extensive maintenance. Re-opening is estimated to be late 2024.