Tour the Ozark Trail in Oklahoma

Make room, Mother Road. Oklahoma has an even older stretch of roadway called the Ozark Trail that dates back to 1913. Plan a road trip to ride on a piece of history. 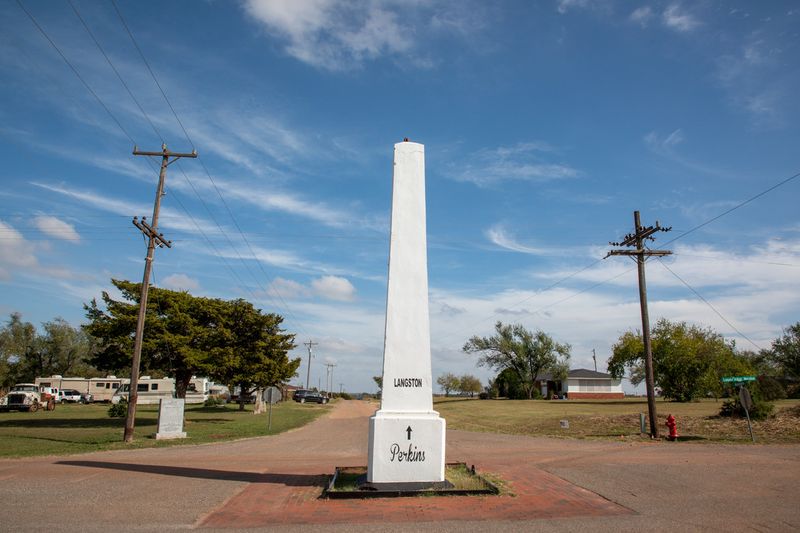 Langston is one of only two Oklahoma locations with an original Ozark Trail obelisk.
Photo Credit: Lori Duckworth

Many people are aware of Oklahoma’s 400-plus-mile stretch of Route 66, but the Mother Road is actually predated by a lesser-known roadway called the Ozark Trail. This early network of locally-maintained roads and highways was established in 1913. Using a series of routes, it connected St Louis, Missouri to both El Paso, Texas and Santa Fe, New Mexico. Over the years, a large part of the Ozark Trail was re-designated as Route 66, though there are still a few areas in northeast and central Oklahoma where you can drive along historical segments and spot the unique obelisk markers used by early travelers.

Start your journey at the Rock Creek Bridge that was put in place in 1921, became part of Route 66 in 1926 and was bypassed in 1952. This Sapulpa bridge is one of the state’s best remaining examples of the steel-truss architecture that was popular in the pre-World War II era. With a patchwork of red bricks and concrete, you can truly feel the age of this narrow bridge, which has a four-ton weight limit and just a 7.2 feet height limit.

Continue traveling west on Route 66/Ozark Trail, and you’ll come to the next architectural attraction - the Ozark Trail Overpass. This railroad underpass, which was constructed in 1925, is just under 30 feet long.

Eat: Fill up at Freddie’s BBQ and Steakhouse where the perfectly-prepared steaks come with unique sides like tabouli and cabbage rolls.

Past Kellyville, Bristow and Depew, you’ll come to Stroud, which is one of only two Oklahoma locations with an original Ozark Trail obelisk. Obelisks are tall, four-sided, narrow structures topped with a pyramid-shaped stone. The original obelisks were painted stark white with green accents and displayed the nearest town name and distance to each.

Of the original 21 obelisks, only seven remain nationwide. This particular obelisk was originally placed in downtown Stroud, but once the route picked up traffic in the late 1920s, the monument was moved off the busy street to its current location closer to Davenport. As fate would have it, traffic was later routed north of that downtown stretch to Route 66’s current location.

To reach the 21-foot-tall stone structure, go about two miles west on Oklahoma 66 from the intersection of Oklahoma 99 and turn south at the gravel road known as 3540 Road/26th Street/Ozark Trail Road. The Ozark Trail obelisk stands in a triangular patch of grass about 1.4 miles south. For years the obelisk was tagged with graffiti, although it was completely cleaned and refreshed by Route 66 enthusiast Sam Murray in 2019.

Eat: No trip through Stroud is complete without a meal at the iconic Rock Cafe, which was built in 1939 and is listed on the National Register of Historic Places.

Stay: Let the vintage neon sign guide you to the Skyliner Motel, a unique Route 66 motor court with 10 clean and quiet guest rooms.

The next part of your journey takes you off Route 66 to the small town of Langston, which is located midway between Guthrie and Stillwater. The city’s most notable attraction is Langston University, the only historically Black college in Oklahoma, which was established in 1897. Travelers to this obelisk can find it the intersection of Indian Meridian Road and Washington Avenue, surrounded by red dirt and gravel roads. Sometimes referred to as the Indian Meridian Monument for its location at the division of Oklahoma and Indian Territories, this obelisk was placed on the National Register of Historic Places in 2017. It has received a fresh white coating of paint and displays directional arrows to Coyle, Perkins, Meridian and Guthrie.

Eat: A short drive to Guthrie gives you tons of dining options like Stables Cafe where you can grab a burger in a fun ‘50s atmosphere or 602 Bistro at the Dominion House Boutique Hotel where you can feast on fantastic Italian entrees before heading upstairs for an overnight stay in one of the guest rooms.

About an hour southwest of Langston, down I-44, you’ll reach a historic trestle bridge that once spanned the Canadian River. It goes by several names including the old U.S. 62 bridge and Newcastle Bridge. Originally constructed in 1923 as the first federal highway project built in Oklahoma, this truss bridge consisted of ten spans over the South Canadian River. It closed to traffic in 1963 and later lost two spans during a storm in 2013. Seven additional spans were also demolished for safety reasons, and the remaining span was donated to the City of Newcastle. The old bridge can be viewed as you cross the Canadian River on I-44, or take exit 108A off I-44 southbound and turn right onto Meridian Road.

Eat: Located just a few miles south of the bridge off the I-44 access road, you’ll find La Luna Cantina & Grill. Each meal served is authentic and made fresh to order.

Round out your Ozark Trail tour in Stratford where you can spot a replica of an obelisk that once stood in town. The original obelisk, created by the Ozark Trails Association in 1921, stood at the intersection of Main Street and Hyden - approximately one block east of the current obelisk’s position. The original obelisk was buried in the 1940s, then later exhumed and placed on an area ranch in the 1970s. In 1997, local residents paid for the replica to be constructed in a courtyard near the water tower. The Stratford obelisk stands 22 feet tall and has a plaque on it giving the history of the Ozark Trail.

Eat: Stratford is the self-proclaimed “peach tree capital of Oklahoma,” so summer visitors may be lucky enough to snag some u-pick peaches or even attend the annual Stratford Peach Festival. Otherwise, hungry travelers can pick up classic American fare at local favorite McGee’s Cafe.