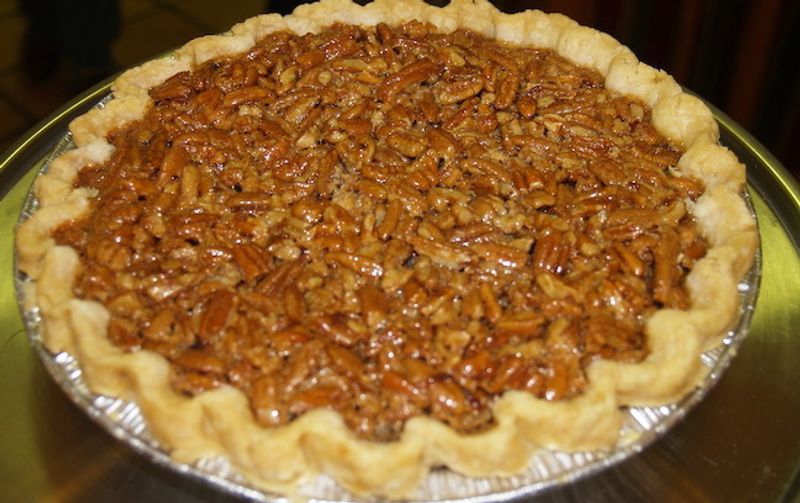 Thanksgiving is here, and Christmas is just around the corner, and in Oklahoma the ovens are preheated and ready to bake! Pies, those familiar, comforting filled shortcrust cakes - sweet or savoury - are known worldwide, but in Oklahoma they are very special.

So much so, they’re even part of the official ‘Oklahoma State Meal’ in the Sooner State, and little wonder, since in Oklahoma, nuts - especially pecans - are available in abundance.

US states not only boast their own flag, many also have state symbols, such as a flower, bird or song. Oklahoma is unique in having an official state meal - like a national dish. It comprises Chicken Fried Steak  (deep-fried, breaded beef schnitzel, similar to Wiener Schnitzel - probably a legacy of OK’s German immigrants) served with white sauce, fried okra, cornbread, barbecue pork, squash, sausage with biscuits and gravy, grits, corn and black-eyed peas. And for dessert, it has to be pecan pie and strawberries!

Oklahoma pies are moreish and ubiquitous, to say the least!

Oklahomans love their pies in all shapes, sizes and varieties - open or closed, baked or deep-fried, with fruits or nuts, sweet or savoury. Pumpkin, apple, pecan and chocolate pies are particularly popular during winter holiday times such as Thanksgiving and Christmas.

"Oklahoma is a land of pies!" is the boast at the ‘Pie Junkie’, a trendy Plaza District restaurant in Oklahoma City. Leslie Coale-Mossman and Darcy Schein bake 500 - 600 pies there every week and on ‘Black Pie Day’ - as they call the day before Thanksgiving, as many as 1,200 pies are sold over the counter. Ordering in advance is highly recommended!

The ‘Drunken Turtle’ is one of the top sellers at Pie Junkie. It's a thin, crispy base made from graham crackers (similar to wholemeal shortbread biscuits), filled with caramel and roasted pecans marinated in Bourbon. Orange-bourbon-pecan, peanut butter-chocolate, apple crumble, or the creamy versions - coconut cream or key lime - are also popular. For those with a savoury tooth, many hearty pies and quiches are listed on the Pie Junkie menu.

Top of the Oklahoma ‘Pie’ Pops is undoubtedly pecan pie, not only thanks to their distinctive flavour, but also because pecans are rich in vitamins and minerals. A close relation to the walnut, pecan trees can grow up to 40 metres high, and the state is one of the most important growing areas in the USA. Pecans owe their name to the Native American Algonquin Indians, although the ‘correct’ pronunciation of the word is contested all around the nation to this day. They’re a versatile ingredient - something visitors can learn all about, in the ‘Nut House’ (a rustic cabin made of ... pecan wood!) on Route 66 in Claremont, OK.

Fried pies are a specialty in Oklahoma – think Italian calzone gone sweet and flaky – delicious and a great treat! Legendary amongst the state’s fried pie purveyors is Arbuckle Mountain Fried Pies, located near the town of Davis in southern Oklahoma. Fried apple pies are the all-time favourite of this small bakery, but there are myriad variants - with seasonal fruits, and of course - with pumpkin or pecans. Also available are pies with cream fillings, and even sugar-free offerings. Savoury pie-lovers can sample beef, bacon, sausage and chicken, and vegetarians are catered for.

If pecans are now also readily available where you live, you can bring a little piece of Oklahoma into your home for Christmas! Pie-making can be simple, and with the exception of the nuts, this one doesn't need any special ingredients.

Put 120g of cold butter in small pieces on the flour, knead with the egg yolk, adding a little ice water as necessary. Shape into a ball and wrap in cling film, and place in the refrigerator for at least an hour. Roll out and place in the greased dish (approx. 26 cm diameter), pulling up the edge. Or cut the ball into slices and press it into the mold with your hands. Prick with a fork. Bake at 200°C for 10-15 minutes with weight (baking paper + dried legumes) on the middle rack, then ‘blind-bake’ for another 5 minutes at 175°C until it is lightly browned. Allow to cool slightly.

Mix with a whisk

Spread 180g pecans - in half or roughly chopped - on the pre-baked base, pour the syrup and egg mixture over them, decorate with other whole nut halves (approx. 50-100g) in a circle and bake for approx. 50 minutes at 175 degrees C. The filling should be firm around the edges, but still a bit soft in the middle. Let rest, serve at room temperature with whipped cream (or vanilla ice cream). Enjoy!