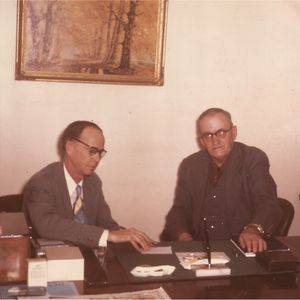 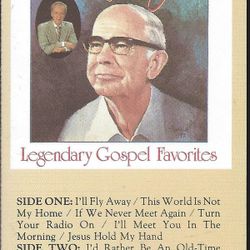 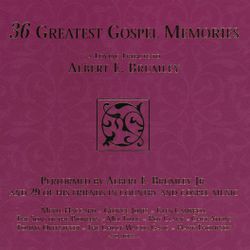 Oklahoma native Albert Edward Brumley Sr. composed a multitude of gospel songs over the course of his life, including many that are regularly covered by contemporary Christian artists today. Brumley’s most widely known hymn, “I’ll Fly Away,” has become a gospel standard since its original publishing date in 1932, and it continues to resonate throughout churches worldwide. With more than 600 published songs under his belt, Brumley is credited with having shaped the gospel music industry.

A constant in his life, music called to Brumley at an early age. Born on October 29, 1905 near Spiro, OK, Brumley grew up around both secular and sacred music, thanks to the influence of his fiddle-playing father. When he was ten years old, the Brumleys relocated to their own farm near Rock Island, a gospel-singing hub in Choctaw Country, where the family sang during weekly church gatherings and house parties. Brumley picked up the fiddle and organ and took up piano lessons with his high school music teacher, jumpstarting his official music education in between his athletic pursuits in baseball, softball and track.

As a 16-year-old in 1922, Brumley wrote his first song, “I Can Hear Them Singing over There” while attending his first singing school through the Hartford Music Company. He also joined the Rock Island Singing Class, referenced in some of his future lyrics. It was then that Brumley discovered his passion for composing under teacher Everett Anthony.

“When [Anthony] said that all the songs and melodies that had ever been written came from that little scale up there on that blackboard…and all that ever would be written could be found in that scale…that set me afire!” Brumley said. “That’s when I decided that if other people could do it [write music], I could do it.”

After realizing his true passion, Brumley traveled to Arkansas to study under Hartford Music Company’s president, Eugene Monroe Bartlett, his professed songwriting idol. Bartlett granted Brumley a tuition waiver and free boarding at his own home after the boy showed up at his office with only $2.50 to his name. With Bartlett’s generosity, Brumley went on to learn shape-note singing at Hartford Musical Institute in the summer of 1926.

“[T]o stay in his home was a special honor to me,” Brumley said.

"[I was] humming the old ballad that went like this: 'If I had the wings of an angel, over these prison walls I would fly,' and suddenly it dawned on me that I could use this plot for a gospel-type song."

The three-week session came to a close at the end of June, but Brumley stayed behind in Hartford a little longer to write several compositions. He even published two songs in Hartford Music Company’s 1927 songbook, giving him a taste of the notoriety to come. Brumley alternated between Hartford and Rock Island for several years, helping his family pick cotton when he was on break from January and June school sessions. It was his interim time in the cotton fields that led to the conception of his most well-known song, “I’ll Fly Away.”

"[I was] humming the old ballad that went like this: 'If I had the wings of an angel, over these prison walls I would fly,' and suddenly it dawned on me that I could use this plot for a gospel-type song," Brumley said.

In 1929, Brumley began traveling with several Hartford Music Company professional quartets, brandishing his bass singing skills, accompanied by his piano talents. Along with these shows, Brumley continued composing a mix of sacred and secular works. As a seasoned songwriter and performer, Brumley started teaching singing schools of his own in Arkansas, Missouri and Oklahoma.

Brumley fell for one of his students while teaching at Powell school in Missouri (he awarded her a 98 percent final grade before they began dating). The two spent years swapping love letters while he traveled in pursuit of his music career. In 1931, Brumley returned to the hometown of Goldie Edith Schell to marry her on the bank of Mike’s Creek in Powell.

Once he settled down with Goldie, Brumley largely gave up traveling to teach, although he did continue performing with quartets. Instead, he alternated between odd jobs like tuning pianos. By eliminating the hassle of constant traveling, Brumley could finally devote his full attention to songwriting and publishing his new creations for Hartford songbooks. Some of his songs like “I’ll Meet You in the Morning,” “I’d Rather Be an Old-Time Christian” and “Jesus, Hold My Hand” became so popular that they were reprinted in dozens of different songbooks in the 1930s.

Major recording companies began recording some of his hits, too, and Brumley eventually secured enough royalties to help him support his family of six children, all named after mentors and family members. Throughout this time, Brumley kept up his relationship with Bartlett, and the two dreamed up the National Singing Convention and the Bartlett Music Company.

Brumley returned to his roots and picked teaching back up after moving to Harrison, Arkansas to collaborate on business ventures with Bartlett. The songwriter also performed with the Melody Four Quartet as a pianist while juggling his writing and teaching jobs with family life. Radio Station KWTO (Keep Watching the Ozarks) granted the quartet a regular performance slot, sparking Brumley’s “Turn Your Radio On” song.

“People would call me up and say, ‘Turn your radio on, Albert. They’re playing one of your songs,’” Brumley said. “And I heard that so many times that I decided to use it for a song title.”

Goldie provided encouragement as Brumley handled numerous creative outlets simultaneously. He even shared song ideas with Goldie to get her opinion on tunes, although he only tested the lyrical content with father-in-law Joe Schell to ensure Biblical accuracy. Other tools Brumley used to help him churn out more than 800 songs were a rhyming dictionary and Roget’s Thesaurus. Inspiration struck so frequently that Brumley often wrote down ideas on whatever scrap of paper he had within reach, including napkins, brown paper bags and wallpaper.

When Bartlett’s new venture failed due to financial issues, the two gospel songwriters moved back to Powell to work under contract for Stamps-Baxter.

“It was too much of a rat race in the city and I moved back [to Powell] to stay,” Brumley said.

Until his death on November 15, 1977, Brumley continued running his publishing company while composing new tunes. Shortly before his passing, Brumley was part of the first Nashville Songwriter Association inductee class, and was inducted as one of the first Gospel Music Hall of Fame inductees. Oklahoma Governor David Boren also officially declared September 13, 1975 as Albert E. Brumley Gospel Music Day.

The spirit of Brumley also lives on in the annual Brumley Gospel Sing, which he organized in 1969 after meeting with J.D. Sumner at a co-op meeting in Vinita. His songs have been translated into foreign languages, and artists in a diverse array of genres continue to record his gospel songs today. The roster of artists who have recorded Brumley hits include pop, country, jazz and rock musicians like the Chuck Wagon Gang, the Ray Charles Singers, Kanye West, Jars of Clay, George Jones and Elvis Presley.