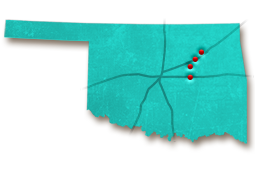 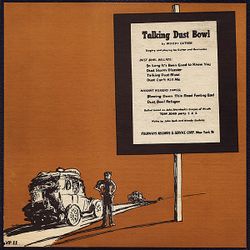 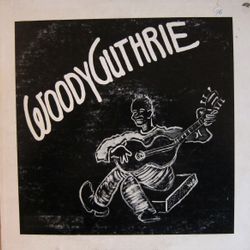 Oklahoma native Woodrow Wilson “Woody” Guthrie, a singer-songwriter and legendary folk musician, came into the world on July 14, 1912, 12 days after the Democrats nominated his namesake for the presidency of the United States.

A popular student in Okemah, Woody sang in the high school choir, served as “joke editor” for the school yearbook and often entertained fellow students with his music, humor and jig dancing skills. Of his hometown, the always colorful Woody Guthrie once said, “Okemah was one of the singingest, square dancingest, drinkingest, yellingest [and] preachingest…of our ranch towns and farm towns, because it blossomed out into one of our first Oil Boom Towns."

In 1927, family tragedy struck as Woody’s father, Charley, was severely burned in a fire and taken to Pampa, Texas to recuperate with family there. Nora Belle, Woody’s mother, was committed to the Oklahoma Hospital for the Insane that same year. As her illness escalated, Guthrie’s family life crumbled and his father lost all land holdings, cattle and other property.

Woody stayed in Okemah and, for the next two years, lived with various local families. During the summers, Woody hitchhiked or hoboed his way to south Texas to work with friends. He earned money by selling newspapers, picking up junk in back alleys, and washing and polishing spittoons to pay rent on a shoeshine stand. These childhood experiences ended up shaping Woody Guthrie’s later works, which highlighted a strong compassion for the poor.

At the end of his junior year at Okemah High School, Woody traveled to Pampa to join his father. Woody found various odd jobs there – working for a bootlegger, painting signs, and entertaining local dance crowds. He formed his first band, the Corncob Trio, with friends Matt Jennings and Cluster Baker.

Throughout his life, Guthrie spent countless hours studying history, political theories, literature, religion and philosophy. Whether the volumes came from the local Okemah Library or the New York Public Library, Guthrie often wrote his interpretations, reactions and beliefs in the margins of the books he read. Woody became a master of the English language, but often used poor grammar as a role-playing device, a method he picked up from his hero, Will Rogers.

By 1937, Woody was determined to become a country and western entertainer, a desire that drove him westward to California where he earned a radio show over KFVD in Hollywood. There, Woody joined with Maxine “Lefty Lou” Crissman to form the musical team known as “The Woody and Lefty Lou Show.” At KFVD, Guthrie attracted thousands of fans and began earning money as an entertainer.

With his songs and poetry, Woody Guthrie asked the American people to see the Dust Bowl decade through the eyes of migrant workers and their families.

In 1940, at the urging of his friend, actor Will Geer, Guthrie went to New York where he met artists who were influential in the urban folk revival. In March 1940, Woody recorded songs for the Library of Congress and recorded his “Dust Bowl” songs for RCA Victor a few weeks later. During the early 1940s, Guthrie wrote “So Long, It’s Been Good to Know You,” “Bound for Glory,” and one of the country’s most famous and beloved folk songs, “This Land is Your Land.”

With his songs and poetry, Woody Guthrie asked the American people to see the Dust Bowl decade through the eyes of migrant agriculture workers and their families. He wrote union and work songs, peace and war songs, children’s songs, hobo songs, and love songs – music that championed the cause of the poor and the downtrodden, people with whom he sympathized since the early days of the Great Depression. Guthrie eventually became known as the “Dust Bowl Balladeer.”

Today, more than 45 years after his death on October 3, 1967, Woody Guthrie’s status, sway and reputation as possibly Oklahoma’s most creative and diversified artistic product continues. His hometown of Okemah celebrates their famous former son with the annual Woody Guthrie Folk Festival, a multi-day event that features live music, poetry readings, jam sessions and more. His legacy is buffered by such recognition as induction into the Rock and Hall of Fame in 1988, the Oklahoma Music Hall of Fame in 1997, the Oklahoma Hall of Fame in 2006 and a Grammy Lifetime Achievement Award in 2000.