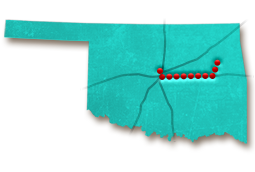 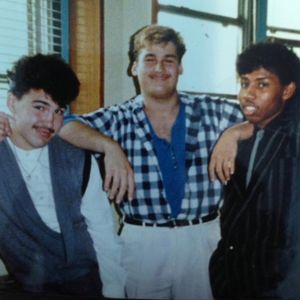 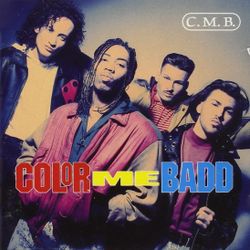 Teenage vocalists Bryan Abrams, Mark Calderon, Sam Watters and Kevin Thornton met in the mid-1980s in the choir at Northwest Classen High School in Oklahoma City. While their raw talent and knack for harmony suggested a bright future for the aspiring vocal quartet, few could have predicted that these scrappy Oklahoma kids would go on to become one of the most successful R&B groups of the following decade. Since those early school days, Color Me Badd—the group’s moniker was inspired by a race horse at OKC’s Remington Park Racetrack & Casino—has gone on to fame surpassing their wildest dreams.

Color Me Badd’s star rose in the spring of 1991 with the release of their explosive debut single, “I Wanna Sex You Up,” which launched the group’s doo-wop-meets-hip-hop sound into car stereos and college parties across the country. It was the public’s first taste of Color Me Badd’s debut album, C.M.B., which would go on to spend 77 weeks on the US Billboard 200 chart. It was, by any account, a meteoric rise for a group of can-do harmonizers who got their start singing for whoever would listen.

Before their runaway success, the members of Color Me Badd would frequently perform impromptu a'capella auditions for touring musicians traveling through the region. They belted out their rich, multi-part harmonies for the likes of Kool & the Gang, Huey Lewis & the News—whom the group once serenaded in their room at the Renaissance Waterford Hotel—Ronnie Milsap, Sheila E. and more. In 1989, Color Me Badd gave their most important performance for rock star Jon Bon Jovi at Penn Square Mall before his band’s show the following evening at what is now the Cox Convention Center in downtown OKC.

“We went and sat in back of Jon Bon Jovi while he watched a boring movie,” Sam Watters told the Oklahoma Gazette in 2010. “Bryan [Abrams] was always the best salesman out of all of us. He said, ‘Jon, can we sing a song for you?’” Not only did Bon Jovi grant their request, but he followed up with an offer that none of them saw coming. “He asked us, ‘How would you guys like to open up in front of 20,000 people tomorrow night?’ And we’re like, ‘Are you kidding me?’ So they let us open on stage, and that’s pretty much how everything went.”

From that pivotal moment, there was no stopping Color Me Badd. The group lit out for New York City and soon found themselves inking a major deal with Giant Records. Arriving on the airwaves during the era of “new jack swing,” made popular by performers like Keith Sweat and Bobby Brown, Color Me Badd found their way in a time that seemed tailor-made for the group’s distinct doo-wop sensibility. In addition to “I Wanna Sex You Up,” the group’s debut album would produce four more hit singles, including the #1 smashes “I Adore Mi Amor” and “All 4 Love,” along with the sultry slow jams “Slow Motion” and “Thinkin’ Back.” The group’s massive success didn’t stop with the radio, with the band making an appearance as themselves in the 90s smash hit series Beverly Hills, 90210.

Color Me Badd would go on to take home the Favorite Single trophy in the R&B/Soul category at the 19th annual American Music Awards, along with Best R&B Soul Single and Song of the Year distinctions at the Soul Train Music Awards. The band followed up this massive success in the fall of 1993 with a second studio album, Time and Chance, representing a new, more funk-forward direction for the group. The sophomore album spent 17 weeks on the Billboard 200 chart, where their next album Now & Forever also charted. While the group’s follow-ups didn’t quite capture the explosive success of their debut LP, Color Me Badd remained a fixture of the 1990s R&B scene in a big way, working with producers like Babyface, Jon B. and Boyz II Men’s Nathan Morris as the group continued to refine its sound and perform for enthusiastic audiences around the world.

Arriving on the airwaves during the era of “new jack swing,” made popular by performers like Keith Sweat and Bobby Brown, Color Me Badd found their way in a time that seemed tailor-made for the group’s distinct doo-wop sensibility.

Color Me Badd split up in 1998, with its members going on to pursue a variety of career paths. Thornton went on to become a minister in Fort Worth, Texas, while Sam Watters launched a career as a record producer for artists like Jessica Simpson, Celine Dion and 98 Degrees. Bryan Abrams released a solo album, Welcome to Me, in 2001 before co-starring in the VH1 reality series, Mission: Man Band, and performing with acts like the Insane Clown Posse and Kool & the Gang.

Color Me Badd reunited as a duo featuring Abrams and Calderon in 2010, before re-forming as a trio with vocalist Adam Emil in 2016. That year, the group headlined the inaugural “I Love the 90s Tour” with their heyday contemporaries Vanilla Ice, Salt-N-Pepa and Tone Loc. The years since Color Me Badd’s massive success have had their ups and downs, but the stage has remained a major draw for these Oklahoma City natives whose vocal chops and extraordinary persistence made them one of the most successful groups of their era.