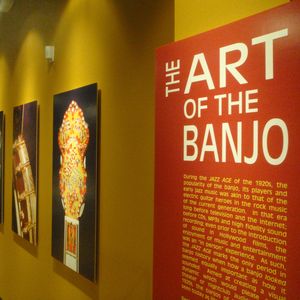 There’s nothing more quintessential to America's music history than the humble banjo, and no museum pays homage to this diverse instrument better than the American Banjo Museum located at 9 East Sheridan Avenue in Oklahoma City. Situated in the heart of Bricktown, this unique museum is the only facility in the world dedicated exclusively to the banjo and its history.

Originally located in Guthrie about 30 miles north of its current location, the museum was founded in 1998 by Brady Hunt and Jack Canine as The National Four-String Banjo Hall of Fame Museum. As the museum evolved, it expanded its collection to include every chapter of the banjo’s history from replicates of primitive banjos developed by African slaves to its more recent identity in folk and bluegrass music. After 10 years, the museum’s instrument collection grew until it was forced to find a larger building. That led them to the 21,000 square foot, two-story building in downtown Oklahoma City.

One step inside this museum and you’ll be blown away by countless gold and silver banjos enclosed in clear glass cases. Each banjo stands on a display box with an information plaque beneath it stating the banjo’s maker, type and year, as well as notes about special or unique details of the pieces.

In addition to the instruments, the museum also has thousands of audio and video recordings. Visitors will also find banjo-related photographs, periodicals, publications dating back to the 1800s and memorabilia - including a banjo head signed by President Franklin D. Roosevelt.

The American Banjo Museum has a variety of exhibits grouped by era. Start your banjo browsing with the interpretive exhibit beginning with the banjo’s roots in American slavery in the mid-1600s.

"The banjo is truly an American instrument, and it captures something about our past."

Move on to the 1840s Minstrel Era as the banjo began to evolve away from being an exclusively handmade folk instrument, then walk through the 1880s Classical Era when the banjo became a legitimate classical instrument.

The Roaring Twenties ushered in a new period of intricate banjo design in America, and the museum has a spectacular exhibit of impressive jazz age banjos. In fact, the museum is home to the largest collection of ornate American made banjos from the ‘20s and ‘30s in the world!

Moving on to the Bluegrass & Beyond exhibit, you’ll see how the banjo found a new niche following World War II when the three-finger banjo picking technique gained popularity. Be sure to check out the incredibly rare original Gibson Mastertone RB-7 five-string banjo in this exhibit. Rounding out the era exhibits is the Folk Explosion, which took place in America through the 1950s and ‘60s. During this era, the five-string banjo and long-neck banjos dominated the scene.

Once you’ve explored the current exhibits, head over to the Learning Lounge where you can grab a banjo and get to plucking! Follow along with one of the instructional videos and you’ll be playing along in no time.

“When you want genuine music,” Mark Twain once said “…just smash your piano, and invoke the glory-beaming banjo!”

While you’re visiting the museum, peek in at the Your Father’s Mustache Special Event Room, which is styled after a popular banjo nightclub from the 1960s complete with a stage, tables with red and white checkered tablecloths, stained glass pendant lighting and vintage posters.

The American Banjo Museum also hosts special event performances nearly every week. The shows are free with paid museum admission, so check the schedule prior to your visit and enjoy a jam session inspired by Celtic, bluegrass and four-string banjo music, as well as traditional music of the open prairie. Once a month, TV personality Lucas Ross also holds a special class within the museum where visitors (with advance reservations) can learn how to play the banjo.

The museum’s annual events include Krewe de Banjo Mardi Gras Celebration, Americana Fest and the Candy Cane Christmas Concert. The museum’s largest annual event is Banjo Fest, during which the ABM’s Hall of Fame induction ceremony is held each September.

Between the museum’s founding in 1998 and 2013, the Hall of Fame added 71 inductees from the four-string banjo world. In the following years, induction categories were expanded to include five-string banjo players and all types of banjos in the non-performance categories, such as design, instruction and promotion. Past inductees have included well-known figures such as Roy Clark, Pete Seeger, Béla Fleck, Earl Scruggs and Steve Martin.

“The banjo is truly an American instrument, and it captures something about our past,” Steve Martin told NPR.

Browse the museum’s website for a full list of Hall of Fame members, and while you’re there be sure to check out the museum’s other offerings including a quarterly newsletter, blog posts, an online gift store, the banjo players directory and the Wall of Honor for donors past and present who have helped establish the American Banjo Museum as the masterpiece it is today.