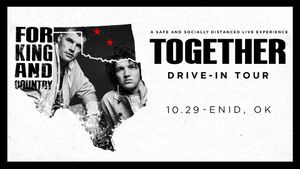 The Muskogee Civic Center, which has hosted a number of entertainment acts including Carrie Underwood, Brooks & Dunn, Willie Nelson, George Jones and Loretta Lynn to name a few, is famous for its association with Merle Haggard’s mega chartbusting hit single, “Okie from Muskogee.”

The iconic, anti-counterculture anthem was originally recorded as a demo in the Muskogee Civic Center’s Star Room in 1969 when Merle was in town for a live performance. Haggard and his drummer, Roy Eddie Burris, set up a microphone in the Star Room’s restroom because the acoustics of the small space were better than the expansive auditorium. Little did they know that the single would become one of the best-selling country music songs of all time.

We don't smoke marijuana in Muskogee; We don't take no trips on LSD We don't burn no draft cards down on Main Street; We like livin' right, and bein' free.

Chorus: I'm proud to be an Okie from Muskogee, A place where even squares can have a ball We still wave Old Glory down at the courthouse, And white lightnin's still the biggest thrill of all.

We don't make a party out of lovin'; We like holdin' hands and pitchin' woo; We don't let our hair grow long and shaggy, Like the hippies out in San Francisco do.

Leather boots are still in style for manly footwear; Beads and Roman sandals won't be seen. Football's still the roughest thing on campus, And the kids here still respect the college dean.

We still wave Old Glory down at the courthouse, In Muskogee, Oklahoma, USA.

The song was originally written as a tongue-in-cheek spoof of small, Southern towns. The idea took shape on Merle’s tour bus between McAlester and Muskogee, when someone on the bus, joint in hand, jokingly quipped, “I bet they don’t smoke marijuana in Muskogee.” Merle had always heard about Muskogee, which was considered the “big town” for the people in Checotah, near where his parents farmed during the Great Depression. The song began to take shape.

“It started out as a joke,” Haggard once said. “We wrote to be satirical originally. But then people latched onto it, and it really turned into this song that looked into the mindset of people so opposite of who and where we were.”

Roy Burris, Merle’s drummer and co-author of the hit song, added, “We were traveling all over, and it just seemed like whenever we came back to Oklahoma, we didn’t hear about drugs; we didn’t hear about riots. Oklahoma wasn’t caught up in all that, it didn’t seem like. Every time we went into Muskogee, it was just a fine, clean town.”

Merle never backed away from what the song came to symbolize.

“When I was in prison, I knew what it was like to have freedom taken away,” Haggard once said. “Freedom is everything. During Vietnam, there were all kinds of protests. Here were these [servicemen] going over there and dying for a cause — we don’t even know what it was really all about. And here are these young kids, that were free, b—-ing about it. There’s something wrong with that and with [disparaging] those poor guys. We were in a wonderful time in America and music was in a wonderful place. America was at its peak and what the hell did these kids have to complain about? These soldiers were giving up their freedom and lives to make sure others could stay free.”

On the Apollo 16 mission to the moon in 1972, module pilot Charles Duke, Jr. took along two identical cassette tapes of “Okie from Muskogee,” playing one while in space and leaving another at the base of the American flag on the moon’s surface. Duke donated the other cassette to the Smithsonian Institution’s Air and Space Museum.

Most recently, Haggard joined Blake Shelton, Willie Nelson and Kris Kristofferson on stage to perform “Okie from Muskogee” at the Grammy Awards in 2014. And, as far as anyone knows, the cassette of the iconic single sits amidst moon dust to this day, making “Okie from Muskogee,” the city of Muskogee, and the Muskogee Civic Center the only country song, city and musical venue to be represented on the moon.