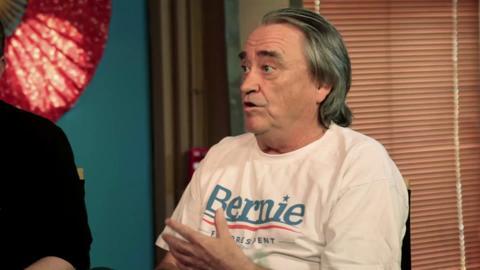 Across the state there are places that have sculpted our sound, shaping Oklahoma’s musical identity. Woody Guthrie put Okemah on the map. Bob Wills and the Texas Playboys held court at Cain’s. Leon Russell created “that Tulsa Sound” in his famed studio, The Church. Just outside Stillwater, Bob Childers held court at The Farm, a hostel and training ground for wayward Red Dirt musicians. Right in the heart of Oklahoma City, Greg Johnson has quietly spent the last few decades building a place dedicated to songs. He calls this spot the Blue Door.

Sadly, Woody and most of the Playboys are jamming somewhere on the other side. Leon sold the Church and Bob’s Farm burned to the ground, but on any given night, you can still visit the Blue Door and listen to hardworking songwriters hone their craft.

Located in a quiet neighborhood, less than a stone’s throw from Oklahoma City University, you could drive by and not even notice the rock faced building with the bright blue doors.

Built in 1922, the structure at 28th and McKinley was originally opened as Akin Garage. In 1926, Emma McFarland acquired the place, converting it into a grocery store in the front and setting up an apartment for rent in the back. Even back then, the musicality of the space was undeniable. At some point during the 1920s and 30s, a small manufacturing company rented the apartment, briefly making instruments in the space. Greg Johnson, the current owner of the Blue Door, found and still owns a zither (a stringed instrument) made during this period bearing the maker’s mark of the Southwestern Harp Manufacturing Company, 2805 McKinley.

With barely over a hundred seats, it's hard not to think of this live music chapel as a sacred space.

From the late 1940s until about 1965, the building continued to be used as a grocery, gradually morphing into a catering business. Sometime in the middle 1980s, Mary Reynolds (a family friend of current owner Greg Johnson) moved in, creating a residence, artist studio and live music performance space she dubbed the Hotel Bohemia. In 1992, Greg Johnson moved home to Oklahoma City after working for nearly a decade within the songwriter community in Austin, Texas. While trying to figure out his next career move, a conversation between his sister, Fran, and friend Mary Reynolds inadvertently changed the course of his life. “My brother has moved back from Austin and if he doesn’t get involved in music, I don’t think he is gonna stay here,” Fran said to Mary, who immediately came up with a solution: “I have this funky place over on McKinley where I live and have done some concerts there. Maybe he can bring some of his friends from Austin and do some shows.”

Johnson took the bait and called some of his Austin connections, booking Michael Fracasso for the first show in the beginning of 1993. Fracasso, who has performed regularly since, wrote "Back to Oklahoma" while driving up for that first show.

In May of that year, Mary Reynolds moved to Austin and Greg took over, moving in to the back of the building and hosting shows. Unsure what to actually call the place after taking over in 1996, the name happened organically: “I called it the Blue Door,” Johnson said, “Simply because I had no idea what to call it, and it did have two bright blue doors in the front.” The Blue Door has been hosting live music performances ever since.

As you walk in to the Blue Door, you might not even notice, but your voice gets just a bit quieter. With barely over a hundred seats, it’s hard not to think of this live music chapel as a sacred space. In fact, many regulars refer to the venue as their church. Pick your spot and take a seat. With top notch sound reinforcement, a great view of the stage and building acoustics to rival any listening room in the world, there’s no such thing as a bad seat in the house. Look up and you’ll notice the nearly century old beams are a bit off kilter, seemingly worn down and slightly bent by all the sonic heartache that has filled the room. In fact, when the Blue Door became a nonprofit in 2006, a significant donation came in for structural improvements. While the building was made safe by the gift, Johnson insisted that the architects keep the walls slightly bent because he believed the lack of ninety-degree angles in the building was the secret to the space’s excellent acoustics.

Reading like a veritable who's who of the last two decades of Americana, posters signed by artists ranging from Jimmy Webb to Lucinda Williams line the walls.

Glance around the room and you’ll notice show fliers and posters lining the walls. Reading like a veritable who’s who of the last two decades of Americana, posters signed by artists ranging from Jimmy Webb, Kevin Welch and Arlo Guthrie to Lucinda Williams line the walls, each expressing the artist’s love and admiration for the little listening space on McKinley Avenue.

When it’s show time, the house music fades and the lights go down as a hush creeps over the audience. “Hey everybody, how’re y’all doing tonight?” Johnson welcomes in his trusty ball cap and quiet smile. “Welcome to the Blue Door.” The band comes up and magic fills his living room.

Whether it’s a handful or a full house, the crowd is intently focused, hanging on every note. It’s you and the band. People don’t generally get up and move around during performances at the Blue Door. Although you’re welcome to bring in beer and wine at the BYOB joint, partying isn’t really the focus. In fact, the only time you’ll hear someone cracking open a beer is during the applause break.

The craft of songwriting is at the heart of the Blue Door. “It’s almost like the whole spirit of the Blue Door and the whole reason I stuck with it all these years - even when it was like a month-to-month situation - is because I just believe songs matter,” Johnson poignantly notes.

This reverence for the craft is reciprocated by artists who take the stage at the Blue Door. “The Blue Door is probably the only place that I still get really nervous before I play,” said songwriter John Fullbright, “…because people are listening and they’re really in tune to what you’re doing.”

This sentiment was shared by legendary songwriter Jimmy Webb who said he’d much rather play the Blue Door than Carnegie Hall. “We need more places like the Blue Door in the United States for young songwriters to get started and develop their craft,” Webb said. “We’re in short supply of Blue Doors, it’s a rare commodity and it’s right here in Oklahoma City.”