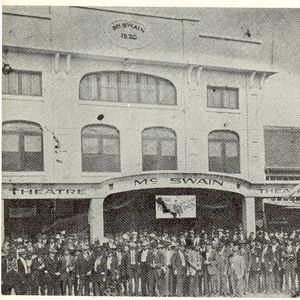 The McSwain Theatre has been at the center of cultural life in Ada for nearly a century. What started as a grand venue for early films and Vaudeville acts went on to become a major hub for country and western music in the region. The theater has undergone many changes since Foster McSwain first opened its doors in 1920, but it has remained throughout the years as a gathering place for the community and a launching pad for local talent.

Foster McSwain saw his first motion picture in Enid in 1910. This was a formative experience for the prominent Ada businessman, who would later dream of bringing the magic of the silver screen back to his adopted hometown in Pontotoc County. A decade later, during a scorching July in 1920, that dream was realized as the lights dimmed and the curtains parted for the first screening at the McSwain Theatre in downtown Ada.

That first feature was a silent film called Suds, a slapstick comedy starring the legendary Mary Pickford. Lines regularly circled the block for such early films, and for Vaudeville shows like Down on the Farm and The Girl from Outside. The following years brought a regular string of first-run pictures like The Adventures of Robin Hood, attracting throngs of moviegoers eager to slide their 25 cents across the ticket counter for an enthralling afternoon at the cinema. Foster McSwain lived with his family on the third floor of the building, always connected to the vibrant energy of his dream below.

In 1929, the McSwain brought the very first “talkie” to Ada: Canary Murder Case, a Paramount Pictures production. The theater would also go on to host to a number of significant world premieres. The most notable of these was the premiere of the 1946 film, Home in Oklahoma, a musical western starring Roy Rogers and Dale Evans. (The movie was shot at the Lazy L Ranch in nearby Davis, where the pair married the following year.) Both Rogers and Evans attended the McSwain screening, and the event was such a draw that 40-cent tickets were reportedly sold for as much as five dollars on the local “black market.”

Like the town it anchors, the McSwain Theatre has seen a lot of changes since that summer in 1920, but its identity remains intact.

Over the following decades, the McSwain thrilled and chilled patrons with blockbuster films like Psycho, Star Wars and Jaws. The theater had become the marquee attraction in this small college town, and it served as a familiar backdrop for generations of local moviegoers. Many Ada residents fondly remember catching a double feature or staying up for one of the McSwain’s regular weekend “Dusk till Dawn” events, which offered all-night entertainment from 9pm to 4am.

When the McSwain bounced back after a brief closure in the 1980s, its new owner Paul Alford had more than movies on his mind. He saw an opportunity to create a family-friendly music performance hall for the area. Alford appointed his niece Jae L. Stilwell, a gifted singer and performer, to run the place as general manager and shape its musical character. Stilwell and her band, the McSwingers, would become a regular staple of the McSwain’s live music scene.

In the years since its re-launch, the McSwain Theatre has been a destination for country music legends and a place for local talent to hone their craft. It’s where pop-country mega star and Ada native Blake Shelton got his start, before he lit out for Nashville and became a household name. The McSwain also honored Mae Boren Axton, the “Queen Mother of Nashville” who co-wrote the iconic Elvis smash “Heartbreak Hotel,” onstage with an award for her contributions to country music. This led to the establishment of the Mae Boren Axton Award, which has become the highest honor bestowed at the McSwain’s annual Grand Awards Show.

The theater changed hands again in 2002, after the passing of Paul Alford, when it was purchased by the Chickasaw Nation. The Ada-headquartered tribe soon renovated and expanded the facilities with new sound and lighting systems, elevators for disabled patrons and an upper-floor gallery space for art shows and special events.

Like the town it anchors, the McSwain Theatre has seen a lot of changes since that summer in 1920, but its identity remains intact. Theater manager Jae L. Stilwell still performs onstage once a month with her band, singing country classics for enthusiastic crowds. Local musicians still step into the spotlight with hopes of seeing their name on a Nashville marquee; country legends like Pam Tillis still grace the stage; and families still line up for classic film screenings and performing arts events. What started as a dream in a darkened Enid theater has since become one of Ada’s most treasured cultural landmarks.