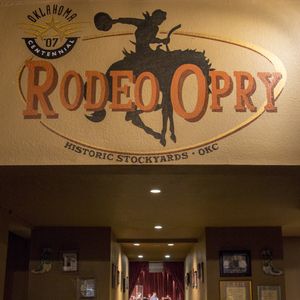 When Granville “Grant” Leftwich began hosting country music shows with friends and family at his Oklahoma City home in the early 1970s, he had little idea that his backyard hootenannies would morph into one of the most important chapters in Oklahoma’s musical story. To the relief of his neighbors, these backyard bashes quickly outgrew their residential venue and Leftwich rented the nearby National Guard Armory in 1977 to host the first occurrence of what would become the longest-running continuous country music show in Oklahoma.

The Oklahoma Opry began in earnest two years later, as the weekly show found its longtime home in the historic Knob Hill Theatre in the Capitol Hill neighborhood of Oklahoma City. Leftwich and friends gutted the theater, replaced the seating and built a new stage and backdrop to showcase the Opry’s house band and a rotating cast of rising country music artists. The Opry would undergo another venue and temporary name change in 2004, when it relocated to its current location at the Rodeo Theatre in Historic Stockyards City as the Rodeo Opry, an official centennial project celebrating 100 years of Oklahoma statehood. No matter the venue or ownership, the Opry has remained an integral part of Oklahoma’s cultural DNA.

For Leftwich, the weekly country music blowout was an opportunity to discover and promote new talent. It’s where stars like Blake Shelton, Bryan White, Kellie Coffey and Cody Canada of Cross-Canadian Ragweed launched their extraordinary careers. The Opry has also been host to legends like Wanda Jackson, Byron Berline, Reba McEntire and more. Over the course of its 40-year history, this country music show has been the site where Oklahoma’s storied musical heritage and bright future collide.

Granville “Grant” Leftwich had little idea that his backyard hootenannies would morph into one of the most important chapters in Oklahoma’s musical story.

The Opry may have all the flair of its famous cousin in Tennessee, but it’s always been a show that’s distinctly Oklahoman. “People say I patterned this after the Grand Ole Opry, but I've never been to Nashville,” Leftwich told the Oklahoman in 2002. “I started auditioning acts to play the Oklahoma Opry in 1980, and since then, we've had thousands of acts through there.”

In the decades since those first auditions, the Opry has earned its title as Oklahoma’s “Official Country Music Show,” bringing down-home, foot-stomping entertainment to Historic Stockyards City every Saturday night. The show still features new talent from across the state, along with veterans of the Opry stage returning to the place where they cut their teeth as aspiring musicians. You can even still find some of the original fans and friends from the Opry’s backyard beginnings, evaluating the show and offering opinions from their corner of the audience affectionately called “The Nag Section.”

“If you are wondering what to expect when you come to a Saturday show, be prepared to hear one of the best house bands you have ever heard, backing different artists each week, and being entertained by a fun, family-friendly emcee while enjoying one of the Opry’s famous root beer floats and snacks from the concession stand,” executive director Cindy Scarberry told Oklahoma Magazine in 2014. “It’s always a fun night of quality music and family entertainment.”

Over the course of its 40-year history, this country music show has been the site where Oklahoma’s storied musical heritage and bright future collide.

In addition to hosting its weekly country music bash, the Oklahoma Opry has gotten more involved in the community as it continues to evolve. The Opry Heritage Foundation hosts the Granville Community Music School, named after Leftwich, which provides music instruction for kids from low-income families. The Foundation also presents the Oklahoma Heritage Concert Series, an interactive educational program focusing on Oklahoma’s musical and cultural history, along with a series of workshops designed for promising young performers.

This widening of the Opry’s role in Oklahoma City is in line with the big ambitions of the show’s founder. Leftwich passed away in 2006, but the country music show that began in his backyard four decades ago continues to thrive, reflecting the can-do spirit that has animated this weekly jamboree through changes in venue, name and ownership. “When you reach a plateau, whatever you're doing, you discover you have to climb some more to get to the next one,” Leftwich told the Oklahoman upon his retirement in 2004. “We'll still be around. We'll be bigger and better, because there is a lot of unknown talent out there, and I'm never changing my philosophy.”