Whether you strike out on a solo birding adventure, or join one of the orchestrated events across the state, Oklahoma is a great place to catch a peek at an amazing variety of feathered marvels. 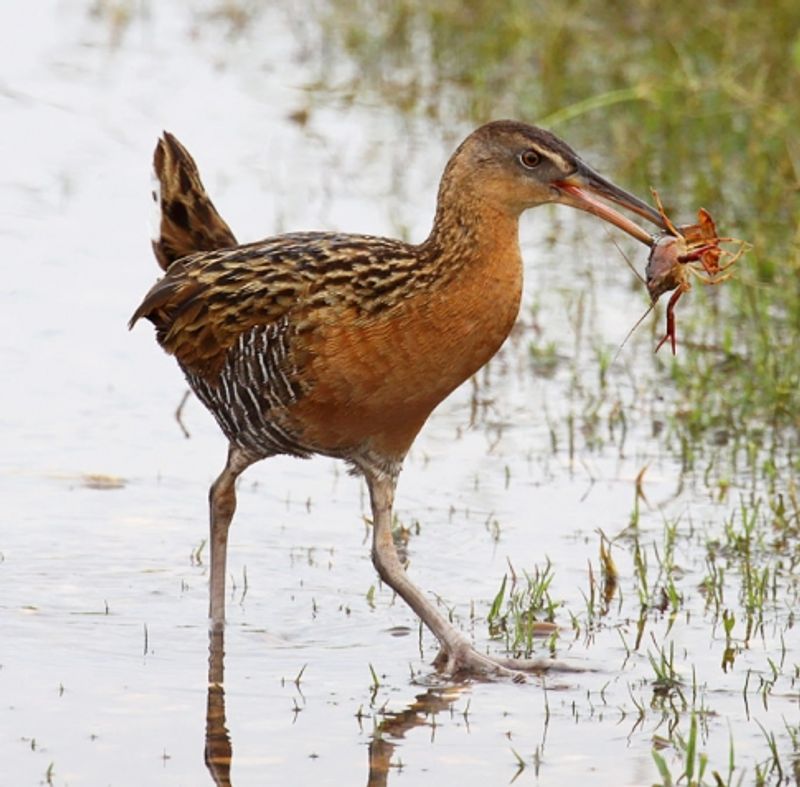 A King Rail feeds on a crayfish at Red Slough Wildlife Management Area near Idabel in southeast Oklahoma.

With nearly 500 species of birds winging their way across Oklahoma, the Sooner State is prime bird-watching territory. Migratory birds pass through Oklahoma twice a year along the central flyway of North America, delighting birders with surprises like Bald Eagles, American White Pelicans, Lesser Prairie Chickens and more. Birding is a rewarding pursuit that can be combined with hiking, boating, fishing or almost any other outdoor activity, and Oklahoma is one of the best places to experience it. Check out some of the state's premier bird-watching areas below, and come see for yourself.

Located near Frederick, in southwest Oklahoma, Hackberry Flat Wildlife Management Area & Center contains 3,700 acres of former cropland that have been restored to a wetland habitat. This basin is surrounded by mixed-grass prairie and croplands, making it one of the best locations in the state for viewing waterfowl and shorebirds. Bird watchers have identified more than 200 species here, including the rare black-necked stilt, stilt sandpiper and snowy plover.

Oxley Nature Center, located inside Tulsa’s Mohawk Park, is a birder’s paradise. A network of walking trails crisscross a variety of habitats, ranging from open prairie and marsh to deciduous woodlands and floodplain forest, which Oxley’s senior staff naturalist, Donna Horton, says is rare in Oklahoma because most of the state’s rivers have been dammed.

The Tallgrass Prairie of Osage County, with its open fields and scattered ponds and marshes, provides an excellent opportunity for viewing prairie chickens, as well as hawks, falcons and other birds of prey. During the winter months, the prairie chickens attract many raptor species, such as the red-tailed and Cooper’s hawk, kestrels, harriers, falcons and both golden and bald eagles. In the fall and winter, ducks frequent the Tallgrass Prairie’s many ponds and marshes.

With more than half of North America’s 800-plus bird species recorded in Oklahoma, it pays to keep your eyes to the sky.

The Red Slough Wildlife Management Area, in southeast Oklahoma near Idabel, has become one of the state’s most popular birding and wildlife-viewing sites. Managed cooperatively by the U.S.D.A. Forest Service, Natural Resources Conservation Service, the Oklahoma Department of Wildlife Conservation and Ducks Unlimited, Red Slough has more than 7,800 acres of mudflats, marshes, riparian zones, hardwoods, wet prairie and shrub thickets.

Several elevated platforms throughout Red Slough aid in the observation of such species as the roseate spoonbill, black-necked stilt and the golden eagle, along with a stunning array of other birds.

Great Salt Plains Lake is an 8,700-acre saltwater reservoir located east of Cherokee, Oklahoma. Bordered by barren-looking salt flats, the landscape doesn’t seem inviting for wildlife at first glance – but bring your binoculars and you’ll spy some of the area’s abundant winged wonders. Some 300 species of birds have been identified here, including snowy plover and the American avocet. According to the Tulsa Audubon Society, about 50,000 geese and ducks find safe harbor and ample food on and around the Great Salt Plains Reservoir. Migrating sandhill cranes and whooping cranes sometimes pass by on their way to Aransas Refuge, and white pelicans can often be seen circling Sand Creek Bay.

The scenic, fascinating salt flats offer a memorable experience for bird lovers and nature lovers of all kinds. Those who want to extend their visit can camp overnight on the lake and take advantage of the wide range of outdoor activities nearby.