Step back in time and enjoy a show at one of Oklahoma’s many historic theaters. See a film, concert or performing arts event, and take in the stunning architecture that makes these time-honored movie houses true Oklahoma landmarks. 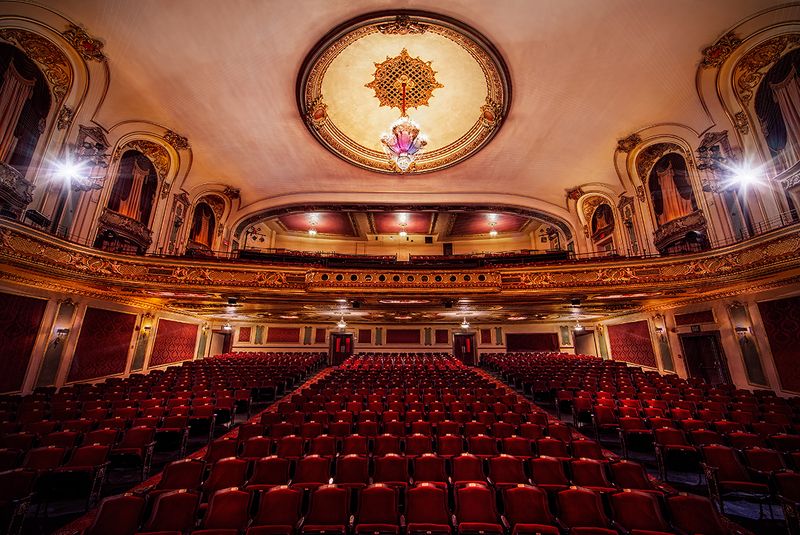 There isn't a bad seat in the house at the Coleman Theatre in Miami.
Photo Credit: Miami Convention and Visitors Bureau

There are plenty of ways to catch a flick, but Oklahoma’s historic theaters offer a lot more than a good movie. These grand cinema houses transport moviegoers back to a time when theaters were the beating heart of cultural life in towns big and small. Grab a bag of popcorn and explore some of the historic theaters peppered throughout the state, offering locals and road-trippers alike entertainment settings rich with Oklahoma history. From gorgeous art deco facades to one-of-a-kind lobbies and screening rooms, these historic gems can be found in every corner of the state—and each one has a unique story to tell.

Stop at the Liberty Theatre in Carnegie and see a movie at Oklahoma’s oldest, continually-operating theater. Opened in 1915, this southwestern gem has been entertaining patrons for more than 100 years. What began as a live performance hall soon brought the first silent films and “talkies” to Carnegie before becoming the first-run, 35mm theater it is today. Bring the family to catch the latest summer blockbuster and dig into a round of the Liberty’s famous chili cheese “Show Dog” coneys at a price that won’t break the bank. From there you can head south to idyllic Medicine Park, a cobblestone resort town nestled in the foothills of the Wichita Mountains that has all the magic of a movie set.

On the other side of the state, the Coleman Theatre in Miami stands as one of the crown jewels of Route 66 in northeastern Oklahoma. Visitors can marvel at the Coleman’s gorgeous Spanish Mission Revival-style architecture and elegant Louis XV interior, complete with gold leaf trim, stained glass and silk damask panels, a carved mahogany staircase and a breathtaking, 2,000-lb chandelier. Catch a performance by the Miami Little Theatre Company, see a classic film with live music accompaniment or relax in the Coleman’s Celebrity Park, a serene “pocket park” honoring famous Miami residents. Since you’re on the Mother Road, you might as well pop in at Waylan’s Ku-Ku Burger to grab a bite and snap a photo of the iconic fiberglass cuckoo bird that has greeted Route 66 travelers in Miami since the 1960s.

Want to visit another Route 66 landmark? Check out the Centre Theatre in El Reno. This 1940s-era beauty was restored by the City of El Reno and offers screenings of classic films along with a regular string of concerts and variety shows like the Backwoods Country Music Show. Of course, no visit to El Reno is complete without chowing down on a world-famous onion burger from a culinary landmark like Sid’s Diner or Johnnie’s Grill, so it’s best to come hungry.

Whether you go for a movie, a play or a concert—or just to marvel at the architectural beauty of a bygone era—you should definitely add some of these iconic landmarks to your next Oklahoma road trip itinerary.

For those who like their historic theaters with a little Western twang, head to the McSwain Theatre in Ada. Nestled in the heart of Chickasaw Country in south-central Oklahoma, this historic theater and performance hall brings movie magic together with Oklahoma’s rich tradition of country and western music. The McSwain Theatre opened in 1920 and once attracted A-list actors like Roy Rogers and Dale Evans to its bustling premieres. This venue has since become a hub for aspiring musicians and established performers, launching the careers of country music mega stars like Blake Shelton and honoring legends like the “Queen Mother of Nashville” Mae Boren-Axton at its annual Grand Awards Show.

If country flair isn’t your thing, indulge in some big-city culture at the Circle Cinema in Tulsa. This historic cinema house—the last of its kind in Tulsa—specializes in foreign, documentary and independent films that offer patrons a taste of something outside the mainstream. Circle Cinema also features locally-produced and directed films, along with special events and festivals like the Tulsa Overground Film Festival and the Oklahoma Jewish Film Festival. Come catch one-of-a-kind screenings, stimulating artist talks and community events at this vibrant and unique theater in north Tulsa.

Looking for an escape? You’ll find it at the Poncan Theatre in downtown Ponca City. This lovingly-revitalized, 1920s theater is one of the few remaining examples of “atmospheric” theater design, transporting visitors to an elegant Italian villa as soon as they walk through the door. One of the world’s largest collections of hand-painted lobby art was discovered at the Poncan during its restoration, and this treasure trove of 1930s film memorabilia is now on display for all to appreciate. Drop in for a guided tour, a movie or a concert and check out other local attractions like the Pioneer Woman Museum and Standing Bear Park.

For a mix of history and school spirit, check out the Sooner Theatre in Norman. Boasting gorgeous mosaic tile, Italian marble and an elegant façade, the Sooner has been a beacon for theatergoers in the heart of central Oklahoma’s Frontier Country since 1929. The Sooner Theatre, which brought the first “talkie” to the region, is now run by the city of Norman and regularly features live theatrical productions, concerts and more. See a show before strolling through the beautiful campus of the University of Oklahoma and exploring the many shopping, dining and entertainment options at the historic Campus Corner.

Sometimes the thrills and chills of the cinema aren’t restricted to the big screen. Some historic movie houses, like the Constantine Theater in Pawhuska, are rumored to be haunted. Come visit this beautiful theater in the heart of the Osage Nation and see a play, classic film or Branson-style music show—but keep your eyes peeled for the female apparition in a button-down gown who has been spotted on the theater balcony. The Constantine Theater is a must-stop for anyone looking for a good spook in the Sooner State. If that ghostly fright has you too worked up, you can unwind at the tranquil Tallgrass Prairie Preserve or chow down on some comfort food at the Pioneer Woman Mercantile.

For big movies with a small-town feel, head 45 miles northeast of Tulsa to the friendly city of Pryor. Here you’ll find the historic Allred Theatre, which was originally opened in 1916 as Lyric Theatre. It is one of the only theaters in Oklahoma that has been showing films continually for over a decade. Head into this Art Deco masterpiece for state-of-the-art films in HD and 3D.

No overview of historic Oklahoma movie theaters would be complete without the Orpheum Theatre in Okmulgee. You can’t miss its dramatic, glittering marquee or its ornate limestone exterior. Originally opened as the Cook Opera House in 1920, the Orpheum Theatre now shows first-run movies and features a stunning art deco interior that will transport you into the past even as you enjoy the latest blockbuster. (Don’t forget to check out the Okmulgee Muscogee Nation Mural on the side of the building.) From there, you can take in the beauty of nearby Dripping Springs Park or stick around town and explore more of the Okmulgee Downtown Historic District.

There is no shortage of options when it comes to historic theaters in Oklahoma. In addition to those listed above, you’ll find plenty to love at the Ritz Theatre in Shawnee, the Pollard Theatre in Guthrie, Vinita’s Center Theatre and many more. Whether you go for a movie, a play or a concert—or just to marvel at the architectural beauty of a bygone era—you should definitely add some of these iconic landmarks to your next Oklahoma road trip itinerary.