Where the Buffalo Roam

Grab your binoculars and hit the road to get up close and personal with the noble American bison. 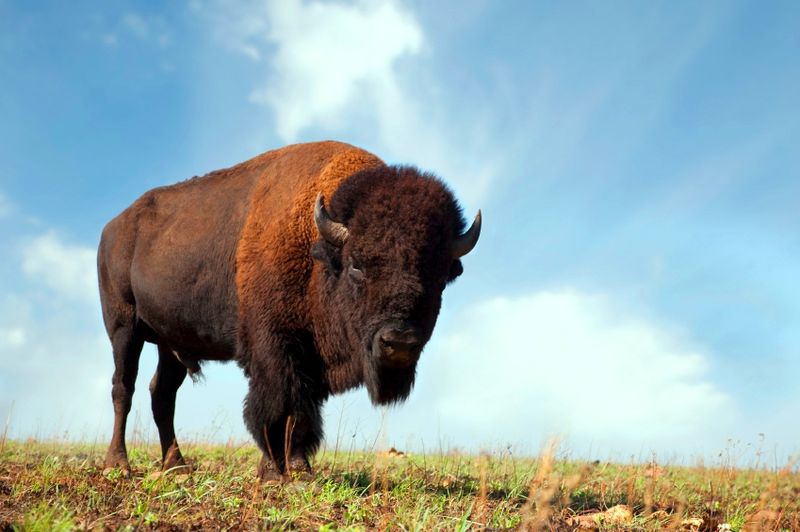 Several locations across Oklahoma offer the opportunity to see buffalo herds roaming wild. A few of the top options include Wichita Mountains Wildlife Refuge near Lawton and the Tallgrass Prairie Preserve in Pawhuska.

Along expansive pastures where native grasses sway in the breeze stands the majestic American bison. At six feet tall and weighing about 1,000 pounds, each massive creature cuts a striking figure with thick brown fur contrasting against the deep blue Oklahoma sky. Take a road trip to one of these six great destinations to see Oklahoma’s state animal in all its glory.

Located in the largest protected area of tallgrass prairie on Earth, the Tallgrass Prairie Preserve near Pawhuska is also home to one of the largest buffalo herds in the country. Visitors can spot the beautiful beasts along the 15 mile stretch of road through the bison area within the preserve. The herd consists of roughly 2,700, so there’s a good chance that you’ll spot a few lounging in the sun or grazing on grass as you drive through.

The Tallgrass Prairie Preserve spans 39,000 acres and is also home to wildlife like white-tailed deer, bobcats, beavers and more. Bring along a camera to document the area’s stunning scenery or stop by the gift shop and pick up a trinket to take home. Get out and enjoy the outdoors with an easy walk through the Tallgrass Prairie Preserve’s self-guided nature trail or check out the longer two mile trail.

Woolaroc, which takes its name from the surrounding woods, lakes and rock in Bartlesville, is home to a bison herd that was originally established with 90 back in 1926. Now, visitors to the Woolaroc Ranch, Museum & Wildlife Preserve will have the chance to spot 125 bison scattered throughout the 3,600 acre property. Also located on the grounds is a world class museum, the former lodge home of Phillips Petroleum Company founder Frank Phillips, and a wide array of wildlife including water buffalo, llamas, Japanese Sika deer, North European fallow deer and longhorn cattle.

In the early 1900s, Wild West entertainer “Pawnee Bill,” a.k.a. Gordon W. Lillie, completed his 14-room mansion on 500 picturesque acres in Pawnee. Today, the Pawnee Bill Ranch Historic Site & Museum is open to visitors and bovine mammals alike. A drive through the exhibit pasture, complete with a paved trail, will take you along an area of land that 30-40 buffalo, longhorn cattle and draft horses call home. The best time to spot these magnificent beasts is in the morning between 8:30 a.m. and 11 a.m. While you’re there, take a tour of the mansion, Pawnee Bill-themed museum, blacksmith shop, 1903 log cabin, 1926 barn and Indian Flower Shrine.

Located in southwest Oklahoma, the Wichita Mountains Wildlife Refuge is home to about 650 free range buffalo, as well as numerous longhorn cattle and prairie dogs.

Occasionally, you may even have to stop your car to let a wayward bison cross the road.

Though the expansive refuge near Lawton consists of 59,000 acres, the chances are good that you’ll spot a buffalo or two munching on wild grass or lounging in the heat of the day. Occasionally, you may even have to stop your car to let a wayward bison cross the road. Nature tours are held periodically throughout the year, which will take guests by foot or by bus to see some of the wildlife.

Though the amazing Iowa Tribe’s Grey Snow Eagle House in Perkins is best known for its eagle rehabilitation program, the nation’s bird is not the only animal you’ll encounter at this native aviary. In fact, the grounds of the eagle house are also home to a herd of at least 60 buffalo. You won’t need an advance tour to see the herd, because you can spot them right from the road. Inside, visitors can view nearly 50 bald and golden eagles.

The natural springs at the Chickasaw National Recreation Area were once a favorite watering hole for buffalo, though they nearly became extinct in the last half of the 19th century. Now, the majestic creatures have been returned to their ancestral homeland at the oldest national park in Oklahoma. Visitors can drive right up to the bison viewpoint or take a hike around the 1.9 mile Bison Pasture Trail to try and spot the herd. The bison viewpoint is located about half a mile south of the Hwy 7 and Hwy 177 intersection in Sulphur. The small herd of 10 roams across approximately 80 acres, so sometimes they can be difficult to spot.

Wichita Mountains Wildlife Refuge & Visitor's Center - Refuge Roadwork on Highway 49
Wichita Mountains Wildlife Refuge will begin a roadwork project to conduct necessary road maintenance by resurfacing and repairing damaged sections of existing asphalt through February 2021. This project will result in single-lane closures along sections of Highway 49 between the West Gate and the Visitor Center. Visitors will still be able to access the western portion of the refuge though they may experience delays. Please use caution and watch for flaggers along this stretch of highway and leave extra time for commuting. Further road closure information will be available on the Refuge website at: www.fws.gov/refuge/wichita_mountains, Facebook, or by emailing the Refuge at wmr_visitorservices@fws.gov.