As the headquarters of the Chickasaw Nation and proud home of East Central University, Ada is bursting with small town charm and big city culture. Its rural roots run deep, but Ada—hometown of music stars like Blake Shelton and Zac Malloy of the Nixons—is quickly becoming an arts destination worth putting on your radar. 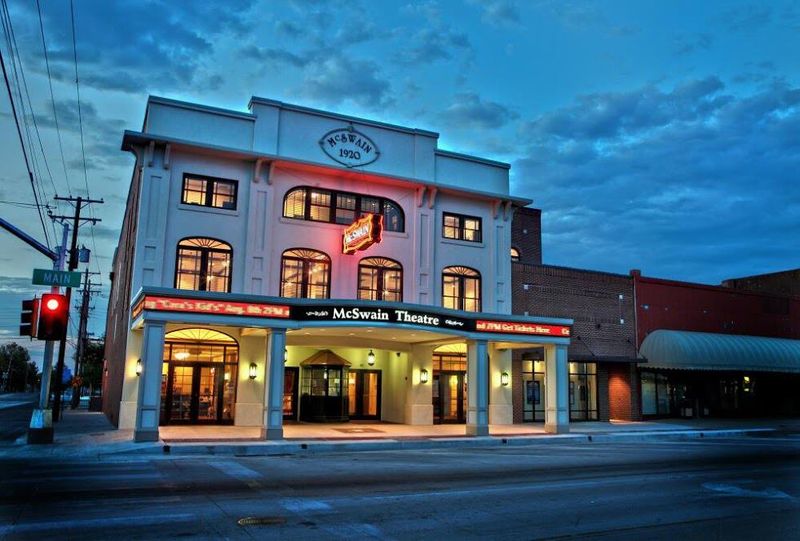 The McSwain Theatre in Ada has been a buzzing entertainment venue for more than 90 years and remains a live music hot spot in the region.
Photo Credit: Luke Cypert

Whether you want to take in an art show and cocktails, rock out at a local concert, catch a film screening or hear fascinating talks by authors and visual artists, you’ll find plenty of rich cultural experiences in Ada that might just surprise you. Travel along to some of the town’s hotspots with this handy list of attractions to make the most of your stay in this up-and-coming arts destination in southern Oklahoma.

You can’t talk about the arts in Ada without mentioning the McSwain Theatre. This historic downtown theater has been at the center of the town’s cultural life since it opened in 1920 as a home for silent films and Vaudeville acts. During its cinematic heyday, the McSwain hosted major film premieres with A-list actors like Roy Rogers and Dale Evans, faithfully serving the community over the following decades as a beloved gathering place and movie house. The theater re-invented itself after a brief closure in the 1980s as a country and western music destination that helped launched the careers of superstars like Blake Shelton. Today you can drop by the McSwain for classic movies, concerts, stand-up comedy and more. Afterwards, you can grab a drink and enjoy delicious Italian fare at the nearby Papa Gjorgjo North Lounge, which also hosts concerts and other performing arts events throughout the year.

Located in the heart of historic downtown Ada, the Grandview is a venue space that cultivates creativity and community. Come for special events like concerts, poetry readings and comedy shows at this beautifully-restored building next to the McSwain Theatre. See what’s going on at the Grandview Gallery, featuring a rotating bill of art exhibits, live music, holiday parties and fascinating lectures from writers and artists. A trip to the Grandview is a must for anyone looking for an unforgettable arts experience in Ada.

Culture abounds in the Arts District of Ada. Located between downtown and the western edge of the idyllic East Central University campus, this vibrant district includes shops, restaurants, a sculpture garden and more. Come to the Hallie Brown Ford Fine Arts Center for fascinating talks by big-name artists like John Waters and Paul Reyser, or soak in the music and sunshine outdoors during AdaFest—an all-day music extravaganza pairing local music acts with headliners like Little Texas. You can also drop by Hot Shots Coffee House for regular open mic events where you can hear local musicians, comedians and writers hone their craft in a laid-back environment, or grab a drink and catch more live music at the nearby restaurant and bar, Vintage 22.

The Scissortail Creative Writing Festival has been one of the state’s most exciting literary events for more than a decade. This writerly extravaganza at East Central University brings together award-winning authors, academics and the general public for three days of readings that will engage and inspire your creative side. From up-and-coming poets to award-winning novelists and non-fiction writers, you’ll hear artists from all kinds of backgrounds and genres at the Scissortail Creative Writing Festival. Be sure to catch readings from the winners of the annual undergraduate creative writing contest, and bring some extra cash to pick up books from the authors you hear at the festival’s massive book sale.

If that doesn’t sate your literary appetite, you can catch a performance by the Ada Shakespeare Company at Wintersmith Park. See the Bard’s immortal works come to life twice a year in June and October at the park’s beautiful amphitheater, built by the Civilian Conservation Corps (CCC) with natural stone found in the park and quarried from nearby Fittstown. Wintersmith Park is also the site of the summer Music in the Park series, presented by the Happyland Music Alliance, where you can hear local musicians perform in the open air at this gorgeous and historic city park in the heart of Ada.