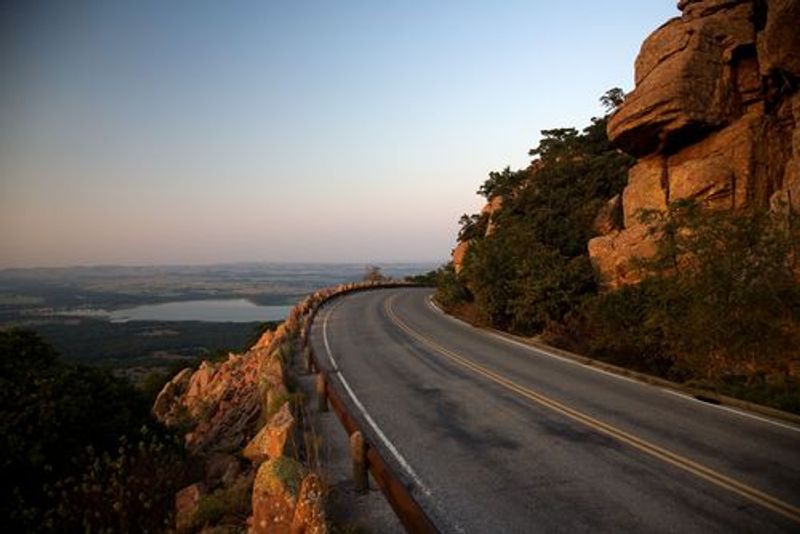 The Wichita Mountains Scenic Byway in southwest Oklahoma allows visitors to drive right to the top of Mount Scott where they can park and take in the panoramic views over the rugged Wichita Mountains.

From wooded landscapes with twisting curves to expansive, red dirt plains, Oklahoma’s diverse terrain offers stunning scenery perfect for your next motorcycle road trip. From the classic nostalgia of Route 66 to lesser-known gems west of I-35, western and south-central Oklahoma are poised and ready to welcome motorcyclists along their bike-tested routes. Enjoy a two wheel journey through scenic state parks, along historic roads and into the breathtaking western Oklahoma sunset.

One thing that makes this motorcycle ride stand out is the Wichita Mountains National Wildlife Refuge. More than 50 species of mammals, 240 species of birds and 64 species of reptiles are free-ranging on the property, which means that it's not unusual to see a giant buffalo crossing the road. Make sure to enjoy the spiraling ride to the top of Mount Scott for spectacular, neverending views of the scenery below.

If you’ve worked up an appetite, cruise on over to Smokin’ Joe's Rib Ranch off Highway 77 in Davis. This all-American restaurant offers traditional barbecue favorites like smoked ribs, pulled pork, chopped beef and smoked brisket, as well as delicious homemade sides. You’ll want to save some room for the unique ‘Strawberries on a Cloud’ dessert. Arrive early for dinner, as the out-of-this-world food at Smokin' Joe's means that you may run into a wait.