The only activity that just might be better than travel is time travel, and during Oklahoma summers, you can beat the heat by hopping through history… all without leaving your own familiar space and time. 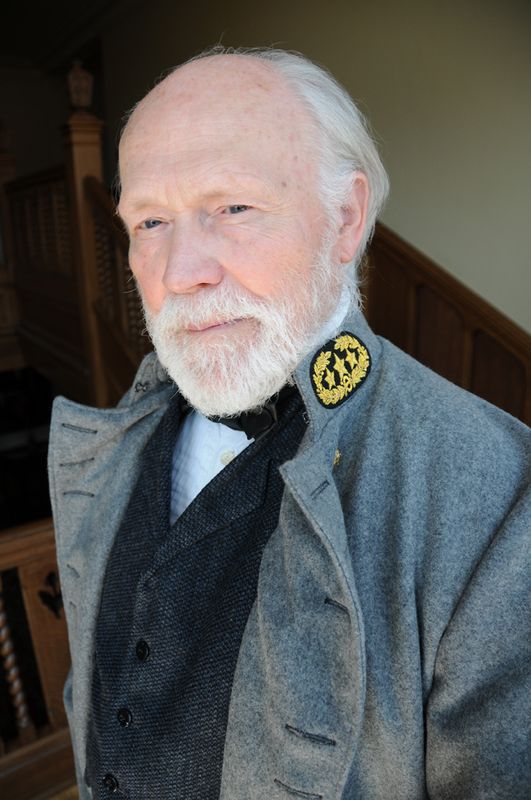 Ted Kachel as Robert E. Lee for the 2010 Oklahoma Chautauqua. As an historical interpreter, Kachel utilizes the skills he developed over 40 years of teaching humanities and theater at colleges across the midwest.
Photo Credit: John Fancher

Enjoy a first-hand experience each June in Oklahoma, when historical tourism of the most vibrant sort draws thousands to the four lucky cities serving as that year’s locations for Oklahoma Chautauqua. In those four locations, figures such as Will Rogers, Amelia Earhart and Stonewall Jackson might drop by for a chat as they bring history to life in the most literal sense.

“People in the crowds really get into character, too,” Oklahoma Chautauqua Coordinator Angela Fox says. “They laugh. They get excited. They get angry. When Jefferson Davis was speaking, there were those in the audience who became the upset Civil War-era people who were asking, ‘Why are you doing that?’ and ‘Explain this to us.’ It’s fantastic when the audience gets that involved.”

The History of Chautauqua

These historical programs have a rich history. The name comes from The Chautauqua Institution, which the Methodists founded in 1874 near Lake Chautauqua in New York as a training program for Sunday School teachers. It became more secular over the years, offering vacations spent studying cultural, political and scientific subjects. In the early 20th century, artists, musicians, magicians and lecturers took to the road performing the Chautauqua Circuit.

During the 100th anniversary of the Chautauqua Movement in 1974, humanities Chautauquas like the Oklahoma Chautauqua started to appear.

Each year, the Tulsa Humanities Council chooses a theme and then seeks nationally-known actor/scholars to represent important historical figures within it. Each Chautauqua includes five characters who present five days of afternoon workshops and evening performances.

For example, past themes have included "A Time for Every Purpose: America in the 1960s," and those who represented that turbulent era in American history included Barry Goldwater, Betty Friedan, Malcolm X and Julia Child. From cooking up the Cold War to cooking up chicken cordon bleu, Chautauqua had it covered. Other themes have been "Lincoln’s Legacy of Equality: Voices on the Fringe" and "The Wounds of War: A Tale of Two Americas," where historical figures Robert E. Lee and Stonewall Jackson made appearances.

Retired English professor Doug Watson, who has created and presented the characters of the author/poets Nathaniel Hawthorne and Stephen Crane for past events, now specializes in Oklahoma’s own Will Rogers. Watson (as Rogers) was part of the 2007 "Celebrating a Centennial: 100 Years of Oklahoma Heroes" Chautauqua series.

“Will called himself the luckiest man alive, but sometimes I think that having had the opportunities to portray him makes me one of the luckiest, too,” Watson says. “I do realize how much passion I feel for the undertaking and how strongly I feel about some of the interpretive issues of performance. Historical characterization has been an important part of my professional experience for 20 years, so I guess I should have these feelings. I’ve gotten to know many of the Rogers family members over the years; I’ve also known other Rogers presenters, including James Whitmore. I’ve worked for the Rogers Memorial. I’ve worked independently and for many state humanities councils and used the program as a fundraiser for a number of organizations, like World Neighbors and Habitat for Humanity.”

Watson’s passion has led him to think deeply about what he does. People who slip into the roles of the famous (and dead) can be called historical re-enactors, imitators or impersonators, he says, but he’s not comfortable with those terms.

“I prefer to be considered an ‘interpreter,’” he says. “I’m not just trying to reproduce someone who’s not around any longer. I’m making some choices about how to portray my Will character. For example, I rarely present him as a cowboy because I want to emphasize his broader engagement of issues and personalities. I want to emphasize Rogers’ comments on the economy, society, politics, etc., in order to invite the audience to recognize similarities between Will’s time and today.”