Oklahoma's outlaw tales will transport you to the dusty days of yesteryear when six-shooter pistols and vigilantes terrorized Indian Territory. 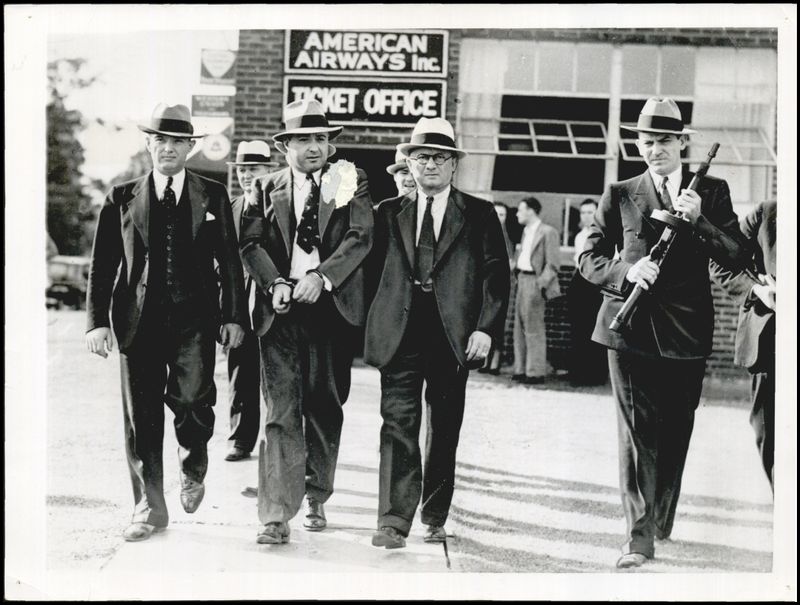 The train carrying Grat Dalton bounced along its tracks taking the notorious rail robber and horse thief straight to justice in a Texas prison. On either wrist, Grat was handcuffed to a deputy and his chance of escape seemed slim-to-none. As the ride continued, luck had it that one deputy was lured to sleep, the other to conversation with a nearby passenger. Unseen, Grat's hand slowly crept into the deputy's pocket, snatched the handcuff key and freed the lock. The rough-and-tumble desperado knew the countryside better than most, and his patience was rewarded over the river as he tumbled, headfirst, into the rushing waters of freedom below. Grat Dalton is just one of many Oklahoma outlaws who have robbed and roved Indian Territory looking for the next big payout.

As one of the last states added to the Union, Oklahoma settlers came with the understanding that they may have to take the law into their own hands to protect their own. Outlaws like Pretty Boy Floyd, who stole from the rich to give to the poor, were few and far between. Other thieves like Bonnie and Clyde had a no holds barred approach to lining their pockets. Read on to discover Oklahoma’s legendary outlaws.

The mist-shrouded Sans Bois Mountains hold many secrets concerning the dark dealings of outlaws Jesse James and Belle Starr. Over the years, fact and fiction have intertwined to create fantastical tales of robberies, murders and unrequited love. Starr, called the Queen of the Oklahoma Outlaws, was known both for her sense of style and her crack shot. Throughout her short life, she married at least three criminals—Jim Reed, Sam Starr and Jim July—though it is also rumored that she was also briefly married to Cole Younger of the notorious James-Younger Gang.

Between horse rustling and bootlegging, Belle Starr and Jesse James made their way to the San Bois Mountains in the 1880s where local lore asserts that the two hid out in the many caves of the area. Today, visitors to Robbers Cave State Park can tread the same paths as the bandits reportedly did 150 years ago. With narrow crevices hidden among looming boulders and hidden niches tucked around every corner, it’s easy to imagine the fugitives hunkered beneath the rocky outcrops.

As a teenager, Charles Arthur Floyd was best known as “Choc” in reference to his favorite beer. Later, he and two accomplices robbed a grocery store where he was described as “a pretty boy with apple cheeks.” Henceforth, the name Pretty Boy Floyd stuck. Raised on a tenant farm near Sallisaw, Pretty Boy Floyd was often called a modern day Robin Hood who would take from the rich and give to the poor. He held up no fewer than 50 banks during 1931, including a bank in Sallisaw while friends and family members watched on.

A slew of robberies, shoot-outs and back-and-forth travel from Oklahoma to Ohio followed Pretty Boy Floyd for the rest of his life. After the death of John Dillinger, Pretty Boy Floyd was bumped up to Public Enemy Number One, and his nefarious ways caught up with him in the fall of 1934 when he was shot to death by FBI Agent Melvin Purvis, the famous G-Man who took out Dillinger. After his death, Pretty Boy Floyd’s body was returned to the lush Cookson Hills of his youth. He is buried in the Akins Cemetery in Akins, Sequoyah County.

Few outlaws have reached the notoriety of Bonnie and Clyde whether because of their young age, brutal crimes or torrid love affair. During the public enemy era of 1931-1934, the couple along with other members of the Barrow Gang killed at least nine police officers and a handful of civilians. Their gang is also believed to have committed about a dozen bank robberies. In 1933, their Joplin apartment was raided by police who found the sensational photos of Bonnie Parker posing with a gun and cigar, as well as her poem "Story of Suicide Sal."

After running from the law for over a year, the couple was ambushed and shot to death in Louisiana during 1934. During their time on the run, Bonnie and Clyde reportedly stayed the night in a cozy cobblestone cottage in the picturesque town of Medicine Park in southwest Oklahoma. Today, the cabin is aptly named the Bonnie and Clyde Cottage and is a favorite for history-buffs and road weary travelers alike.

The younger Dalton brothers started out life in present-day Pawhuska on the right side of the law as lawmen. However, they changed their tune shortly after not being paid for work and began their lives of crime. By 19, Bob Dalton had already murdered a man and Grat Dalton was arrested for stealing horses. Together with a handful of rough-and-tumble miscreants, the Dalton Gang was formed. The gang specialized in bank and train robbery, and their escapades in Indian Territory piled up: four train robberies between May 1891 and July 1892 including trains in Perry and Adair. Wild tales sprang up about a handcuffed Grat Dalton who jumped from the window of a moving train into a river before finding his way back to his Oklahoma home.

Their downfall came about when the Dalton Gang decided to rob two banks at once in Coffeyville, Kansas. Unlike the locals who looked somewhat favorably upon Pretty Boy Floyd's robbery, Coffeyville natives armed themselves and eventually killed all but Emmett Dalton. Twenty-three gunshot wounds and 14 years later, Emmett Dalton was released from prison and later authored a book about the gang's escapades. Emmett Dalton was laid to rest in the Kingfisher Cemetery in Kingfisher.

The story of the Marlow brothers is both sad and uplifting, which may be why it was picked up by Hollywood and starred none other than John Wayne. "The Sons of Katie Elder" was roughly based on the true story of five brothers who stuck together-literally-and fought off a mob while chained together as part of a police escort.

During the early 1880s the Marlow family settled in Indian Territory in the present-day southwestern town of Marlow, located just 15 minutes north of Duncan. Four of the five brothers (Alfred, Boone, Charlie and Lewellyn) were arrested for stealing horses, and their brother George attempted to clear the family name but he soon found himself behind bars. Boone somehow escaped and returned to Marlow while the remaining brothers were transported to a jail in Texas. During the journey, the four brothers were shackled together—George to Lewellyn and Charlie to Alfred—when their wagon was ambushed by an angry mob. The guards ran to join the mob while the brothers raced to arm themselves. In the ensuing gun fight both Lewellyn and Alfred were killed, while George and Charlie were seriously wounded.

Sadly, Boone was poisoned and shot to death for reward money, though his killers and the angry mob were ultimately brought to justice. George and Charlie were later acquitted and moved away to become law enforcement officers. Visitors can still see artifacts from the original Marlow family at the Marlow Area Museum.

Fred Tecumseh Waite, better known as "The Outlaw Statesman," was afforded every opportunity as a child. He even attended college, which was nearly unheard of during the 1870s for a Chickasaw Indian. However, following his graduation, Waite headed to New Mexico where he soon met with the infamous Billy the Kid. Both worked for partners John Tunstall and Alexander McSween to homestead land under the Desert Land Act.

Tunstall ran amiss of the local sheriff and his posse and was later killed. When Fred Waite and Billy the Kid heard their employer was dead, they sought revenge but were soon thrown into prison themselves. Though they were only imprisoned for a matter of days, it was long enough that they missed the funeral for Tunstall. Afterward, Billy the Kid dropped his moniker for that of the Regulators, a group seeking vengeance against the death of Tunstall. Fred Waite was also a member. The Regulators killed the sheriff and four other men who were thought to have aided in the killing of Tunstall. The two opposing factions were involved in numerous shootouts, during which Waite was involved.

After the murder of Alexander McSween, Tunstall's partner, the Regulators lost their cash cow and the gang eventually split up. Fred Tecumseh Waite later returned to south-central Oklahoma where he became a top politician in the Chickasaw Nation, though he died before he could ever lead as governor from the Chickasaw National Capitol Building.

Prohibition-era gangster George Kelly Barnes experienced his first Oklahoma arrest in 1928 after smuggling liquor onto an Indian Reservation. After serving a three-year sentence in Leavenworth, Kansas for his crime, Kelly made his way back to Oklahoma, where he met the alluring Kathryn Thorne. The two wed in September 1930, and Kathryn bought him his first machine gun, the inspiration behind his well-known moniker, Machine Gun Kelly.

While in Oklahoma City, these partners-in-crime formulated a plan to kidnap and ransom local oil tycoon and businessman Charles F. Urschel. In July 1933, Urschel arrived, blindfolded, on Kathryn’s stepfather and mother’s farm in Paradise, Texas. After collecting on their $200,000 ransom, Machine Gun Kelly and accomplice Albert Bates released Urschel, who immediately contacted law enforcement. Urschel helped federal agents quickly solve the crime by taking note of his surroundings and leaving fingerprints behind during the kidnapping.

With Urschel’s help, the FBI followed the evidence straight to Machine Gun Kelly and Kathryn, who surrendered when agents raided their temporary Memphis hideout. From there, the Kellys were flown to Oklahoma City, where they and Kathryn’s parents were convicted and sentenced inside the Post Office, Courthouse and Federal Office Building.

Machine Gun Kelly served most of his sentence in Alcatraz before transferring to the United State Penitentiary at Leavenworth, Kansas, where he suffered a heart attack on his birthday on July 18, 1954. Kathryn and her mother, Ora, were eventually released from a West Virginia correctional facility in 1958 and returned to Oklahoma City. Kathryn worked as a bookkeeper at the Oklahoma County Poor Farm, along with her mother. Ora died in 1980, and when Kathryn passed away in 1985, she was buried next to her mother’s plot at the Tecumseh Cemetery.

After President Abraham Lincoln's 1865 murder at Ford's Theater in Washington, D.C., John Wilkes Booth was on the run. While it's generally accepted by historians that Booth was killed weeks later in a barn fire after refusing to surrender, there is conflicting information on whether or not Booth actually perished in the accident. Several years after the assassination, a man called David E. George turned up in the northwestern Oklahoma town of Enid. George, who claimed to be a house painter but had no skill in the trade, remained there until his suicide in 1903. On George's deathbed, he claimed to be John Wilkes Booth and was later identified by some family and friends as the real Booth. Afterward, his body was embalmed and displayed in various carnivals until the 1970s when the body disappeared. Visitors can tour George's room by calling Garfield Furniture at (580) 237-5032 Monday through Friday 9 a.m. to 3 p.m.