The Standing Bear Powwow: a Gathering of Tribes, a Celebration of Culture

Immerse yourself in the culture and pageantry of six distinct American Indian tribes at the Standing Bear Powwow in Ponca City. 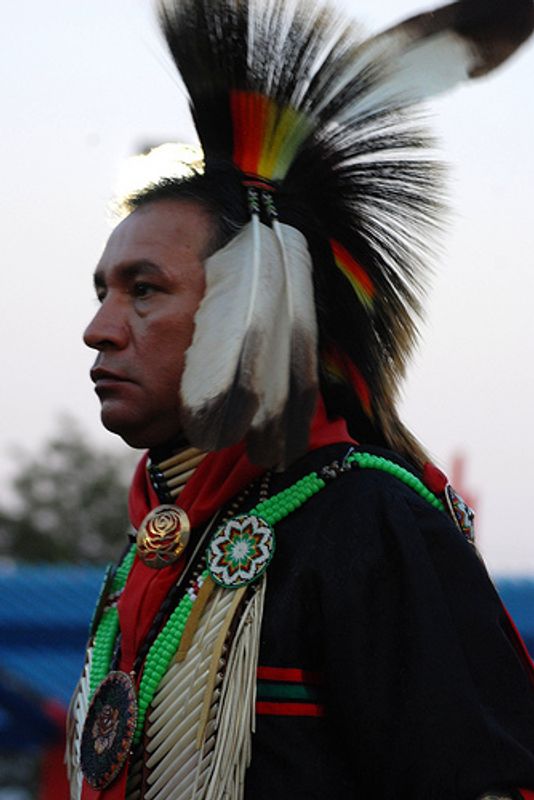 The pageantry of the Standing Bear Powwow makes it a powerful experience for those who attend the annual event in Ponca City each September.
Photo Credit: Lisha Newman

In the rolling prairie tablelands of north central Oklahoma, six tribes – the Kaw, Osage, Otoe-Missouria, Pawnee, Ponca and Tonkawa – gather each year to celebrate their tribal heritage. They sing, drum and compete in intricate and powerful dances, don colorful tribal regalia and share meals while catching up with each other. And they invite the public, native and non-native alike, to learn, celebrate and be inspired alongside them. This is the Standing Bear Powwow, one of the most significant American Indian events in the United States, held in Ponca City the last Friday and Saturday of each September.

History of the Standing Bear Powwow

The Standing Bear Powwow first took place in 1995, organized to help non-native people gain a deeper understanding of the significant contribution of native cultures to the history and heritage of Oklahoma and the United States. Because the powwow is truly inter-tribal (it is more customary for powwows to focus on one tribe), it is one of the more unusual American Indian events in the nation. In 2007, it was selected by the American Bus Association as one of the top 100 events in the U.S.

“Watching these six tribes work together on a project is incredibly inspiring and there is an amazing amount of non-native support for the powwow in the Ponca City area. From volunteers to corporate partners, there’s just a tremendous outpouring of support from the non-native community. That’s very gratifying to the tribes and ultimately supports what we’re all about, which is educating.”

The grassy arena hosting the powwow is a pristine park setting, adjacent to the tranquil 63-acre Standing Bear Park and Museum just south of Ponca City. With its towering trees, gentle grasses, walking trails and a magnificent 22-foot bronze statue of Ponca tribal leader, Chief Standing Bear, the event backdrop is an especially attractive one to visitors.

Attendance averages between 3,000 – 5,000 people each year, a significant number of them non-native, fulfilling the vision of the Standing Bear Foundation which is to bridge the gap between native and non-native peoples. Great care is taken to educate first-time visitors about powwow etiquette, and to provide information on the dances and ceremonies so that everyone feels welcome.

The Standing Bear Powwow begins on Friday evening with gourd dancing, followed by a majestic procession known as the Grand Entry. On Saturday, gourd dancing begins in the early afternoon and continues throughout the day. Food vendors and artisan booths featuring Native American arts and crafts are ever-present. A Saturday evening meal is served free to the public, and Walker says the meal typically features some traditional foods such as corn soup or fry bread made by Native American families.

“It’s a very unique experience when this happens, prepared by Native American families who specialize in cooking for large groups. Typically they feed about 1,000 people. We serve and carry the food to the elders. It’s not uncommon to see the mayor of Ponca City and our state representatives serving food to the elders, a powerful and touching moment,” says Walker.

The Standing Bear Powwow is free and open to the public and the site features ample parking. Seating is limited, so visitors are encouraged to bring their own lawn chairs or camp stools.

For more information on powwow etiquette, read our Understanding the Powwow article.