Learn about the traditions of the Native American powwow and feel more at home attending one. 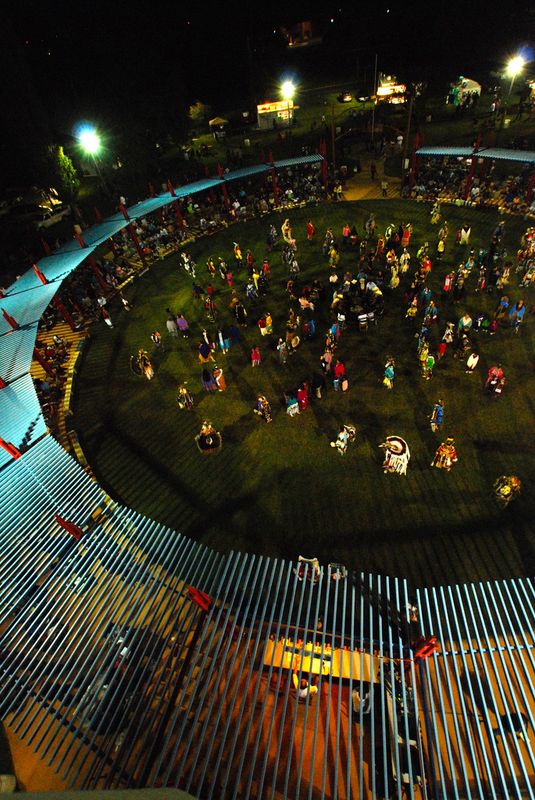 A powwow is a gathering of Native American people and their guests who come together to sing, dance, renew old friendships and make new ones. It is a celebration, a social gathering, a friendly dance competition. Just as important, a powwow is the time to focus thoughts on the old ways and to preserve the rich heritage of Native American culture. There are sacred traditions to be found in this coming together of people. As the circle represents the unity of life, so the circle of the dance arena represents a joining together around the music of the drum and singers.

Many powwows, including all of those listed on this website, are open to the general public and everyone is welcome to experience the event. If you have the opportunity to attend a powwow, be sure and take it! The modern powwow is a link to the Native Americans' past and these ceremonies help them maintain their heritage. These ceremonial legacies should be viewed with respect and honor by all in attendance. To help you feel more at home attending a powwow, we've put together some useful information and powwow etiquette tips.

The drum is central to every powwow. It is more than a musical instrument, it is the heartbeat of the Native American people. The drum sets the rhythm of the dance and the tempo of the song. The drum is made of hides, stretched over a wooden frame and laced together with rawhide thongs. Without a drum, there is no powwow. The drum and its singers are so important that they are often placed in the center of the arena.

To the newcomer, the powwow dances may appear very similar, but each type has its own set of distinctive steps. At many intertribal powwows, you can look for three basic competition classifications of dances for each sex. Male dancers will typically dance Traditional (or Straight), Fancy and Grass dances, while female dancers will usually take part in Buckskin, Fancy Shawl and Jingle Dress dances. Keep in mind that these are only a few of the many types of dances you may see at a powwow, depending on the tribal affiliation and purpose of the event.

The Traditional Dance is one of the oldest forms, and its movements tell the story of a warrior stalking food or tracking an enemy. The Traditional Dancer will wear a single bustle of eagle feathers, a feathered or roach headdress, beaded moccasins and ankle bells. Usually he carries a shield, a weapon or dance stick, and may paint his face with a tribal or family design.

It is a celebration, a social gathering, a friendly dance competition.

The Fancy Dance is one of the most athletic and strenuous of modern powwow dances, and is said to have originated in Oklahoma. The dance features jumps, spins and fancy footwork to the beat of the drum. The Fancy Dancer will wear two bustles of brilliantly colored feathers, a headdress, beaded moccasins, angora anklets with bells, arm bands and carry two feathered sticks.

There are several stories about the origins of the Grass Dance. One tells how Plains Indians would dance in a special way to flatten the high grass for a new camp. The Grass Dancer uses swaying, dipping and sliding steps. His outfit consists of a shirt, aprons and pants trimmed with fringes or ribbons, a headdress, beaded moccasins and fringed anklets with bells.

Among the women, the Buckskin Dance is the oldest. A dance of elegance and grace, it requires much skill to stay in perfect rhythm with the drum and keep the swaying movements smooth and flowing. The regalia consists of a beaded buckskin dress with long fringes, a shawl, beaded leggings, an eagle plume for the hair and a fan, usually of eagle feathers.

The Fancy Shawl Dance represents a butterfly in flight. The dance is highly dynamic, with fancy footwork intermingled with spins and twirls, always keeping in step with the drum. The Fancy Shawl Dancer will usually wear a fringed shawl with matching vest and leggings which may be beaded or sequined, and a feather plume for the hair.

The dance of the Jingle Dress comes from one of the northern U.S. tribes and is associated with healing the sick. Legend has it that a grandfather cured his sick granddaughter by creating a special jingle dress. The dress has many metal cones, called jingles, attached closely enough together to chime during the dance. Other parts of the regalia include beaded leggings, a dance belt, an eagle plume for the hair and a feather fan. The dance is highly energetic and requires intricate footwork.

The area for dancing and ceremonies is called the arena, and its boundaries are usually marked by hay bales set in a circle. The arena has been blessed and is considered sacred. Do not walk across the arena; instead walk around it. Children should be supervised and not be allowed to run in or around the arena. Pets should not be taken into the arena.

Listen to the emcee. He will entertain and keep attendees informed about powwow events. If you have questions, the emcee can usually answer them for you between announcements.

Ask permission before taking photos of dancers in regalia. If the photo is for publication or commercial use, this should be explained before the photo is taken.

Photos should not be taken during Veteran's Songs, Flag Songs, prayers or any other time specified by the emcee.

The correct term for a dancer's outfit is regalia, not costume. Never touch a dancer's regalia. Many of the ornaments have religious meaning and are cherished family heirlooms.

Always stand respectfully during special songs. These include the Grand Entry, Flag Songs, Veteran's Songs or any other song that the emcee designates. During these songs, men should remove their hats.

When invited by the emcee or performers, visitors may participate in social and inter-tribal dances.

It is considered polite to accept an offer of food or an invitation to eat with the dancers. It is a high honor to be asked to eat with a Native American family.

Around the arena, there is a sheltered area that can either be in the form of an arbor or simply a canopy, which designates a resting place for the elders, dancers, singers and powwow officials. Take care not to sit in these places, which are easy to spot if you pay attention. There will be chairs, articles of clothing and other personal belongings in plain sight.

Unless you are sure that seating will be provided, bring your own chair. The seating immediately around the arena is reserved for dancers and their families. Seats with blankets, shawls or regalia items on them are taken and should not be bothered. Do not sit on someone else's blanket unless invited. Uncovered seats are considered available.

Alcohol, recreational drugs and firearms are strictly prohibited at most powwows.

If you see a feather fall from a dancer's regalia or locate a lost feather, do NOT pick it up. Notify the nearest Veteran, the Head Veteran, Head Man Dancer, emcee or Arena Director immediately. There are special ceremonies involved in returning the feather to its place and photos should not be taken during these sacred ceremonies.

Do not touch a drum or sit at a drum without permission.

Pointing with the fingers is considered poor manners by some tribes. If you must point, use your head and nod in the direction you wish to indicate.

It is common to see teepees and lodges set up on the grounds. These are not open to the public unless clearly marked for demonstrations and visitors. Powwow participants live in the tipis during the gathering and they are, in fact, their homes for the duration.