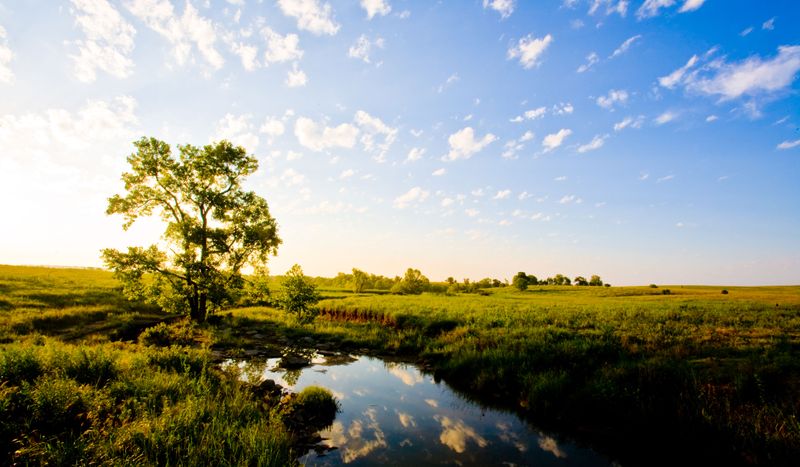 Lying along the fertile plains of the Cimarron and Arkansas rivers, the Wild West Territory in north-central Oklahoma is as unique and diverse as its history and culture. From museums to English gardens, restored theaters to an exhibit of spurs, there’s probably something you haven’t seen before in this part of Oklahoma. And best of all, you will find enough to do for a two-day or weeklong trip.

Wild West Territory earned its name when several small communities in north-central Oklahoma joined together to provide guidance and quality information to those traveling to and through the area, and to ensure that those traveling in this region of Oklahoma have quality experiences. Over the years the group members have changed, and today it represents 10 communities and one lake.

Situated along I-35 just south of the Kansas border is the town of Blackwell. The town was founded as a result of one of the famed land runs that opened Indian Territory for settlement. The Cherokee Strip Land Rush of 1893 is documented in the Top of Oklahoma Museum on Main Street. The museum’s artifacts range from antique lace to old farm equipment, as well as vital records of the area that are a genealogist’s dream. If you’re into antiquing, you’ll be right at home in Blackwell, where seven antique stores are open seven days a week.

East of Blackwell on state Highway 11, then north on U.S. Highway 77 you'll find Newkirk. Here the entire downtown is on the National Register of Historic Places with the largest collection of limestone buildings in Oklahoma. The Newkirk Community Museum has an interesting collection for history buffs.

From Newkirk, drive south on U.S. Highway 77, then east on State Highway 11 to the next stop in your Wild West Territory tour, Kaw City. Located on a peninsula jutting out into Kaw Lake, you’ll find a pleasant little town. Despite its size, Kaw City has a lot to offer with two museums, one dedicated to the history of the community and Kaw Lake, and the other to the history of the Kaw Nation, from which the community and lake derive their names. At this end of Kaw Lake is one of the lake’s two marinas and beaches, Pioneer Beach and Pioneer Cove Marina. Stop by the marina, local convenience store or one of the area’s restaurants to learn where the best fishing spots are on Kaw Lake.

East of Kaw City on State Highway 11 you’ll find an English garden on the prairie, the Bivin Garden, in Shidler. These six acres have perennials and annuals in abundance, plus spacious lawns, hundreds of trees and shrubs, and several ornamental ponds. The garden is open May through September.

If you're into antiquing, you'll be right at home in Blackwell.

Head north on State Highway 18 from Shidler over the rolling hills of Osage County and you'll find yourself at the north entrance of the Tallgrass Prairie Preserve. Herds of bison freely roam the preserve, and more than 757 plant species have been identified on the grounds. Greater prairie chickens boom here in April, and breeding birds can be seen in the spring.

Drive through the Tallgrass Prairie Preserve and into the Osage County seat and home of the Osage Tribe, Pawhuska. Learn about the Osage Tribe at the Osage Nation Museum, which serves as a repository for an extensive collection of Osage artifacts and photographs. The area’s history also is depicted in the stained-glass windows at the “Cathedral of the Osage,” Immaculate Conception Church. Crafted in Munich, Germany in 1919, the famed windows depict the introduction of Catholicism to the Osage.

No visit to Pawhuska's complete without at stop at The Pioneer Woman Mercantile. The passion project of Food Network TV show host, Ree Drummond, this fully-renovated two-story shopping extravaganza features a fantastic selection of Oklahoma-themed merchandise, a deli, coffee shop and bakery.

Continue your journey from Pawhuska west on U.S. Highway 60, then south on state Highway 18 to Fairfax. View the famous spur collection at the First State Bank, open weekdays from 9 a.m. to 3 p.m. Learn about the history of the area at the Fairfax Area Historical Genealogy Society on Main Street, across from the bank.

South on State Highway 18 and nestled on the banks of the Arkansas River is the sleepy town of Ralston. A fishermen’s paradise, many sportsmen snag sand bass or channel cat from the swiftly flowing water.

Continue south on State Highway 18 to Pawnee, the hometown of Pawnee Bill. This town pays tribute to its namesake with the annual Pawnee Bill's Wild West Show the second, third and fourth Saturdays in June. The show captures the Old West with calvary charges, horsemanship and Annie Oakley shooting balloons at a full gallop. While you’re there visit the Pawnee Bill Ranch at Blue Hawk Peak. During the summer you can splash for fun at the restored Pawnee Bathhouse & Recreation Area on Pawnee Lake.

Your final stop in the Wild West Territory area is north and west of Pawnee in Ponca City. Well known for the Marland Mansion and Pioneer Woman Museum, plan to spend a few days to see these attractions and others Ponca City has to offer. In the early years of statehood, E. W. Marland struck black gold and became an oil baron based in Ponca City. The Marland Oil Company was eventually bought out and became Conoco. Visit Marland’s first house in Ponca City, the Grand Home, to see the first stage of his lavish lifestyle and view his large collection of 101 Ranch memorabilia. Then go across town to tour his second Ponca City home, the Marland Mansion, also known as the "Palace on the Prairie" which was inspired by Marland's visit to the Davanzatti Palace in Florence, Italy.

The Marland Mansion tour takes you on a journey through 55 exquisitely-appointed rooms telling the story of one family's rise to awesome power and riches and their decline. Near the Marland Mansion is the Pioneer Woman Museum narrating the history and contribution of the women who braved the wild frontier in Oklahoma.

The arts abound in Ponca City with bronze statues of Standing Bear, the Pioneer Woman, E.W. Marland and Lew Wentz located throughout town. The Poncan Theatre was once an ornate Vaudeville house and movie palace and has now been restored to her former glory. Inside is a true treasure - the world's largest collection of hand-painted movie lobby art. And, American Indian art is on display at the Standing Bear Museum.

So whether you are looking for an outdoor experience on an uncrowded lake, or eager to explore a variety of interesting and unusual attractions, north-central Oklahoma's Wild West Territory has plenty to offer.