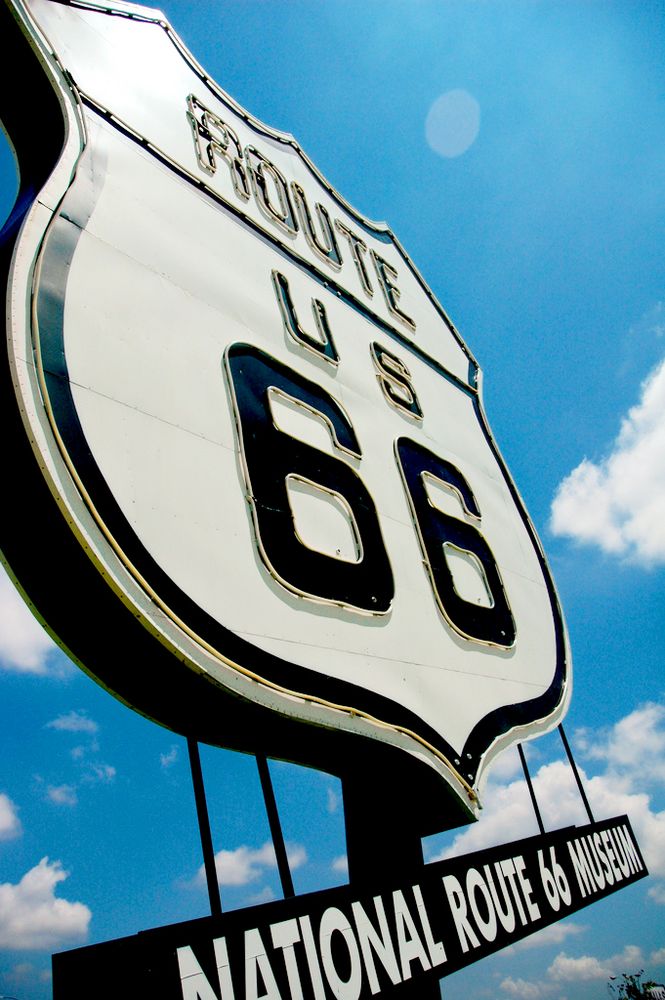 Route 66 Starting in the East

In Claremore, visit the Belvidere Mansion, a three-story Victorian mansion built in 1907.  This Victorian gem features an L-shaped foyer with Italian tile, marble wainscoting and pressed tin walls and ceilings. The Belvidere Tea Room is located on the first floor and serves a delicious lunch, while the top floor ballroom has been completely restored and offers a beautiful panoramic view of the city of Claremore.

The JM Davis Arms & Historical Museum in Claremore houses more than 50,000 unique items including firearms, swords, knives, a "Believe It Or Not Oddities Gallery," outlaw guns, Native American artifacts, and 1,200 steins from all over the world.

Take a trip through the following Route 66 highlights located in western Oklahoma for a mix of history and pop culture. The Route 66 connection in Clinton is long and deep, so visit the city's biggest claim to fame at the Oklahoma Route 66 Museum, which houses an extensive collection of Mother Road memorabilia and one of the highway's best gift shops. Clinton is also home to McLain Rogers Park, a family-friendly destination with a Route 66-themed miniature golf course.

Take a trip through western Oklahoma for a mix of history and pop culture.

A dainty tearoom may seem like an unlikely biker hangout, but more than a few gleaming Harleys have roared up to Country Dove Gifts and Tea Room in Elk City for the restaurant’s famous French silk pie. Not far away, the National Route 66 Museum resembles a giant, walk-through diorama of the road’s history, complete with enormous kachina dolls and a pink Cadillac.

Whoever coined the phrase “stick to your ribs” may very well have been thinking about Oklahoma’s official state dish: chicken-fried steak with cream gravy. Chicken-fried steak is found on virtually every Route 66 diner menu between Quapaw and Texola. Check out the following highlighted spots for the ultimate Route 66 “must-taste” chicken-fry experience. A Vinita landmark since 1927, Clanton’s Cafe earned national attention in 2007 when its chicken-fried steak was featured on Guy Fieri’s popular Food Network show "Diners, Drive-Ins and Dives."

At POPS in Arcadia, you can’t miss the 66-foot giant pop bottle sculpture and you won’t want to miss a hefty serving of chicken-fried steak washed down with your choice of more than 650 flavors of soda.  Built in Weatherford in 2006, Lucille’s Roadhouse accompanies its chicken-fried steak with mashed potatoes, gravy and a bit of history. The business is a tribute to the late Lucille “Mother of the Mother Road” Hamons, who for many years operated an historic Provine gas station on Route 66 just east of Weatherford.

Built in 1898, the iconic Round Barn in Arcadia is the only wooden round barn in Oklahoma and boasts exhibits and a gift shop inside. The Stafford Air & Space Museum in Weatherford offers a look at one of the few actual Titan II rocket launch vehicles on display as well as many fascinating artifacts from the Smithsonian.