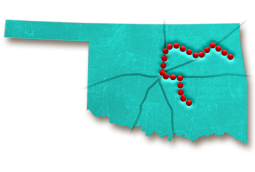 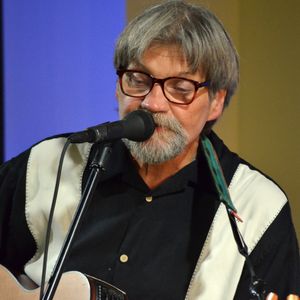 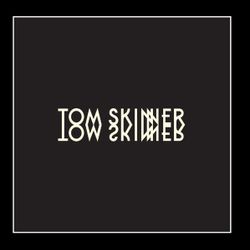 Without a doubt, one of the forefathers of Red Dirt music was Tom Skinner. His time spent in the studio was scarce by choice, but he lived for the stage and could be found performing at every Wednesday Night Science Project held at The Colony in Tulsa until his passing on July 12, 2015. Although his later years were spent in Tulsa, Tom, like many other Red Dirt musicians, also spent a great deal of time in Stillwater.

Born in California on January 8, 1954, Tom Skinner was raised in Bristow and spent his youth singing in the church choir. When he was in high school, his brother recalls that Tom would slick back his hair and play rock ’n’ roll with a band called Tommy Delite and The Flames, but it wasn’t until several years later that he would pursue music full time.

After graduating from Bristow High School, he joined the Air Force. Following his service, Tom attended Oklahoma State University in Stillwater and graduated in 1982 with a degree in Public Relations, Advertising and Applied Communication. During his free time, he and his brothers would play at venues up and down Stillwater’s famous “Strip” and would later go on to form a musical community.

“Red Dirt is really more of a brotherhood and a community thing than it is necessarily a style,” Skinner said in a 2012 American Songwriter interview. “…Red Dirt incorporates a lot of things – Gospel, rock ‘n’ roll, blues, bluegrass … but some of us older guys have a little bit more of the folk thing in us than the younger guys do.”

Red Dirt incorporates a lot of things – Gospel, rock ‘n’ roll, blues, bluegrass … but some of us older guys have a little bit more of the folk thing in us than the younger guys do.

Tom, who also went by the nickname Tiny, was joined by his younger brothers Mike and Craig in The Skinner Brothers Band, and he also made a name for himself as a solo performer on both the guitar and bass. In fact, his first major break came when he played bass in a band called Santa Fe with a young, mostly unknown Garth Brooks. Skinner accompanied Brooks to Nashville, but wasn’t thrilled with the scene.

“I was the only one in the band with a kid, and it’s already enough of a struggle when you first go to Nashville,” Skinner said. “I wasn’t really playing much music there and all I was doing was working a lot, so eventually we went home. I really liked Nashville, but looking back I believe I made the right decision because I’ve gotten to play a lot of great music with a lot of great people.”

After returning to Oklahoma, he formed a band called The Twanglers, which Skinner once explained as “kind of a country-rock 'n' roll outfit, and more rock 'n' roll than country. I'm the country influence; they're the rock 'n' roll.” During the next few years, Skinner would travel back and forth from Baton Rouge, where he was living at the time, to Stillwater where he performed with the band. It was during this time that he caught the attention of Binky Records. They struck a deal, and he returned to Oklahoma in 1996 to record his first album, “Times Have Changed.”

The album, which was released in 1997, contains 13 original compositions. One song in particular - “Water Your Own Yard” - was recorded (though not released) by Lynyrd Skynyrd, while another - “Goin’ Down the River Road” - was later used by Cajun music star Waylon Thibodeaux.

Next up, Skinner recorded the “Acoustic Skinner” with Binky Records in 1998. The 12-track album featured Skinner with only a guitar, and would be his last studio album for many years. Later that year, Tom returned to the studio with his band The Dusty Children (previously dubbed Farmboy) to record final album with Binky Records. However, prior to the release in 1999, Tom suffered from a heart attack and the project was shelved.

It was around this time that Tom Skinner joined the Mike McClure Band on bass and vocals. Interestingly enough, it was McClure, a Red Dirt producer for 598 Recordings, who would convince Tom Skinner to record his final album over a decade later.

“I always thought, well, I need to record one more at least before I die because I wanted to have a good one,” Skinner told The Oklahoman in 2012. “Mac was kind of after me to do one ... and I’m really glad he did, actually, ‘cause I enjoyed working on this one. And I like it. I can listen to it without cringing up.”

The result was his 2012 self-titled album, which was recorded at McClure’s studio, The Boohatch, in Ada. McClure said that Skinner “had more influence on what I do musically than anyone. He taught me how to be a musician.”

Although they were no longer bandmates, Garth Brooks also remained a big fan of Skinner.

“I know Tom Skinner well enough to say that making a record of his original recordings was not something he was easily talked into doing and hats off to McClure for getting it done. Tom is very private with his music because the stuff that he writes is extremely personal. This is a very, VERY special gift from Tom to all of his fans…of which I am one,” Brooks wrote.

One of Tom Skinner’s most prestigious awards - his induction into the Oklahoma Music Hall of Fame - came in March 2015, just four months before his death. It was held at the Freeland Center for the Performing Arts in Bristow, an appropriate venue for the ceremony considering his ties to the city.

It wasn’t about albums or awards for Tom Skinner. It wasn’t about being a founding member of the Red Dirt genre. What it really boiled down to was the music.