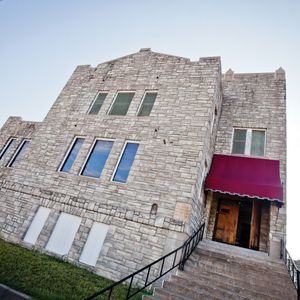 And it’s all because of Leon Russell, the legendary Oklahoma musician who purchased the church in 1972 and turned it into a world-class recording studio for his label, Studio Records. During the five-year period in which Russell owned the building, select visitors witnessed recording and jam sessions by world-renowned artists during rock and roll’s greatest era. Competing with the famous Cain’s Ballroom for the most legendary musical landmark in Tulsa, John Wooley, author of From the Blue Devils to Red Dirt: The Colors of Oklahoma Music, makes an important distinction between the two: “The Cain’s was for people, and the Church was for musicians,” he said. “You had to know somebody to get in.”

"Cain's was for people, and the Church was for musicians. You had to know somebody to get in."

Drummer Jamie Oldaker, plucked by Leon Russell from a local jazz band, was a member of the select few who walked the hallways and staircases of this inner sanctum of rock and roll. “He used to come see me play at The Colony,” Oldaker said of Russell. “His manager came one night and said ‘Leon wants you to come over to the house.’ That’s how it all started.”

In his early 20s, after Russell granted him entrance to the Church Studio, Oldaker went on to play with Bob Seger, Eric Clapton, the Bee Gees, the Tractors, Ace Frehley and more. “It was very difficult to get into if you weren’t in the club,” Oldaker said. “They were pretty selective who they let hang around. It was cool. I was grateful to be a part of it.”

In those days, passersby might spy George Harrison smoking a cigarette on the front steps or Tom Petty dining at The Ranch House across the street. Oldaker said the area around 3rd Street and Trenton attracted crazed groupies and musical geniuses alike, and recalled an instance when a recording session was interrupted by a crazy-looking guy carrying a guitar knocking at the front door.

“He said, ‘I’m Jerry Williams, and I just rode here from Fort Worth. I’m not leaving until I see Leon,’” Oldaker said. The musicians allowed the fellow to enter, sit down at the piano, guitar in his lap, and sing and play both instruments. It soon became obvious that Jerry Williams was an exceptional musician and songwriter. “Somebody said, ‘You better call Leon,’” Oldaker said. Russell came, listened and brought Williams into the Shelter Records fold. Williams went on to write songs for such famous artists as Stevie Ray Vaughan, B.B. King, Bonnie Raitt, Delbert McClinton and Eric Clapton.

In those days, passersby might spy George Harrison smoking a cigarette on the front steps or Tom Petty dining at The Ranch House across the street.

With its school gym-sized recording room, red and white Wurlitzer jukebox, control room with exposed brick walls and original church windows, the Church Studio is one of the most legendary buildings in Tulsa. It even features the original hitching post where church-goers could tie up their horse before venturing inside. Located in Tulsa’s Pearl District, the studio can be found situated along Leon Russell Road.

During its years of ownership and use by Leon Russell and Studio Records, The Church Studio was also the epicenter of The Tulsa Sound -- bluesy music with whispery vocals, a rock and roll shuffle, and often adorned with honkytonk piano. In more recent times, The Church Studio became headquarters for the country-rock band The Tractors. Oklahoma bands Hanson, the Chainsaw Kittens and Admiral Twin have also passed through its doors.