Become a culinary connoisseur of Oklahoma and embark on an epicurean adventure across the Sooner State armed with this quick guide to some of Oklahoma’s favorite local dining destinations. 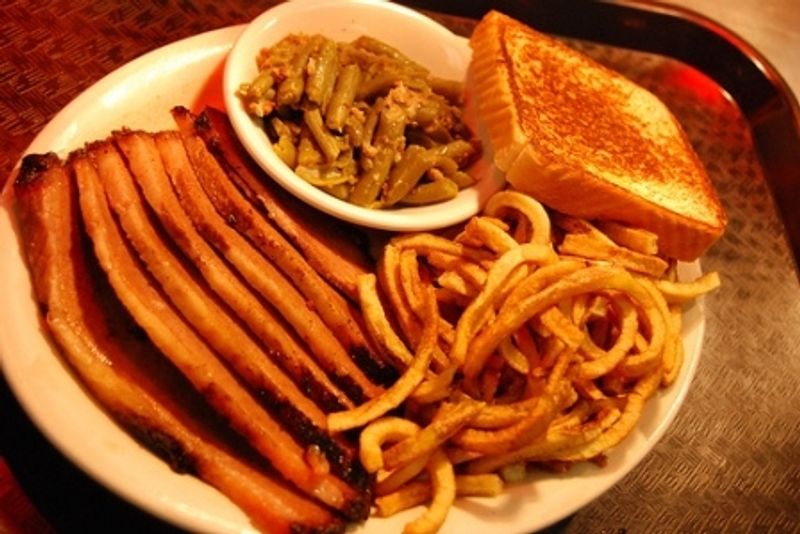 Feast on sliced brisket and chopped barbecue at Van's Pig Stand in Shawnee.

From extravagant eats to hometown favorites, Oklahoma is bursting with flavor. Whether searching for Route 66 diners, small-town cafes, urban bistros or time-honored barbecue joints, this guide gives an exclusive sneak-peek into where the locals go to whet their appetites and satisfy their cravings for home cooking and gourmet treats. Take a foodie road trip armed with this handy guide and prepare to tempt your taste buds along Oklahoma’s vast culinary landscape.

An Oklahoma icon for generations, this Oklahoma City steakhouse has hosted everyone from celebrities to presidents. Rub elbows with both cowboys and businessmen as you dine on Cattlemen’s specialty – their prime, signature steaks. However you order your steak, you can be well assured that it will arrive on your table cooked to perfection. Enjoy the surrounding ambience of the city’s Historic Stockyards District while feasting on Cattlemen’s famous lamb fries, house dressing or the Presidential Choice T-Bone, named after President George H. Bush during his visit in the early 1990s.

For lip-smackin’ good barbecue, look no further than Van’s Pig Stand. In operation since 1930 and known as the oldest family-owned restaurant in Oklahoma, this barbecue haven serves up tender brisket, juicy ribs and the restaurant’s famous Pig Sandwiches. Pair delicious smoked meats with Van’s original, tangy barbecue sauce and don’t forget a side of curly fries, baked beans or zesty relish – just remember to top off your meal with a slice of Van’s delectable rum pie.

For top-notch Tex-Mex, head to Las Cascadas and enjoy sizzling fajitas, grilled tamales and homemade enchilada platters. This family-owned restaurant features recipes that originated in the owner’s hometown in Mexico, ensuring that each dish is prepared with plenty of authenticity and love. Choose from over 40 menu items at Las Cascadas, or simply enjoy excellent tacos and cold beer while dining on the restaurant’s outdoor garden patio.

A fixture on the southern Oklahoma music and nightlife scene, Two Frogs Grill has expertly combined good food with live, toe-tapping tunes. Described as Cajun with a funky twist, Two Frogs Grill features an eclectic mix of Southern favorites and Cajun delicacies. Dive into plates filled with spicy seafood and tender ribs while marveling at the collection of signed electric guitars that pepper the walls. Check out the restaurant’s music calendar for a current schedule of live entertainment. Past acts have included Lynyrd Skynard, Willie Nelson, Styx and Ted Nugent.

A local staple since the 1960s, the Hammett House Restaurant is known for its home cooking and well-prepared American comfort food. Visitors to this Claremore mainstay will enjoy freshly-cut steaks, old-fashioned burgers, catfish “po-boy” sandwiches, pork chops, ham steaks, hot mashed potato rolls and more. A trip to the Hammett House wouldn’t be complete without a serving of the restaurant’s famous mile-high pies, made fresh each morning.

Toby Keith’s I Love This Bar and Grill – Oklahoma City

Created by Oklahoma native Toby Keith, this Bricktown restaurant offers colossal servings of down-home favorites and a friendly, country atmosphere complete with suspended motorcycles, Toby Keith memorabilia and massive big-screen televisions. Pull up a seat at the center bar for a frosty beer or grab a table for loaded mashed potatoes, flash-fried catfish and some of the best chicken fried steaks around. For something truly unique at Toby Keith's I Love This Bar & Grill, try the Fried Bologna Sandwich. Check out other locations in Catoosa and Thackerville.

Grab a table for loaded mashed potatoes, flash-fried catfish and some of the best chicken fried steaks around.

Known as the poster child for Oklahoma’s Little Italy, Pete’s Place has been serving up Italian delicacies for more than four generations. Originally created in order to feed local coal miners in the 1920s, Pete’s Place is known for its made-from-scratch ravioli, lasagna, Italian sausage and chicken parmesan. Treat yourself to a bottle of Pete’s Choc beer, famous for being brewed illegally in the basement of Pete’s Place during Prohibition, or simply satisfy your hunger with savory Italian entrees that have been perfected over decades.

The shining stars at Click’s are the huge, hand-cut steaks that are uniquely seasoned with a closely-guarded secret recipe and cooked on a hot griddle. The steaks at Click’s are known for being fork-tender and plate-sized. Choose between prime rib, filet mignon, ribeyes or T-bones and feast on Southern side dishes such as okra, sweet potatoes and sautéed mushrooms. For dessert, you can’t go wrong with Click’s made-from-scratch pies and a serving of cherry, apple, peach or blackberry cobbler.

Armed with over 100 wines by the bottle, this sophisticated Enid eatery offers visitors selections ranging from spicy reds to sparkling whites. Pair a glass of your favorite wine with upscale steak, seafood and pasta entrees, or feast on bite-size tapas. The extensive tapas menu at Panevino includes eggplant sandwiches, fresh hummus, stuffed mushrooms, meatballs and other flavorful finger foods.  Dig into the Atlantic salmon with Dijon bistro sauce, or share a serving of crab and havarti cheese dip with friends.

Located within a former, brick-clad hotel dating back to 1910, Frank & Lola’s ranks high on charm and culinary skill. Everything served at Frank & Lola’s is made-from-scratch with an emphasis on impeccable quality. Try the pan-seared salmon with wasabi cream, the green chili or the outstanding bread pudding, all local favorites. Rumored to be haunted, visitors to Frank & Lola’s are invited to enjoy well-made entrees and eclectic menu items while indulging in a dose of local lore.

Known as the favorite chili of Will Rogers and declared by Martha Stewart as the best chili in the nation, Ike’s 100-year-old chili recipe is still going strong and remains unchanged since 1898. Whether you order it “straight” or over spaghetti, you’re sure to love this closely guarded family recipe. Order the Three Way for heaping portions of chili over spaghetti and beans or simply enjoy the delicious simplicity of the original recipe with crackers. Frito chili pies, Coney dogs, burgers and loaded fries are also available to hungry travelers and locals alike.

A haven for visitors with large appetites, Jigg’s Smokehouse prepares colossal sandwiches that have been tempting smoked meat lovers for years. Simply put, the sandwiches at Jigg’s must be seen to be believed. Order the Wooly Burger for a towering two pounds of ham and seven slices of beef summer sausage wedged between bread slices, or challenge yourself to the Kitchen Sink for a delicious yet gut-busting combination of sausage, smoked ham and pork-link sausage with barbecue sauce. All meat at Jigg’s is smoked and hand-chopped on-site, while homemade relishes and house-smoked beef jerky are also available.

Make your way to El Reno, the “Fried Onion Burger Capital of the World,” to reward your taste buds with juicy hamburger patties combined with shredded, caramelized onions on a flat-top grill. Famous for miles around, these mouthwatering local delights are often paired with another El Reno favorite, Coney hot dogs topped with meaty chili and pickled slaw. Try Sid’s Diner and enjoy your fried onion burger with an old-fashioned malt and fries, or Johnnie’s Grill for burgers followed by a slice of cool pie. The fried onion burgers at Robert’s Grill are served across a 14-stool counter dating back to 1926 and paired with hot coffee as well as plenty of small-town charm.

The Salas family has been satisfying the appetites of hungry travelers with piping-hot platters of Mexican food at Salas Mexican Restaurant for generations. Savor well-seasoned entrees including fajitas, tacos and enchiladas and don’t miss the Salas charro beans, spicy Mexican soup or the deep-fried, sliced jalapeno peppers known as bottle caps. Order the popular Salas Special for a guacamole tostada, chile relleno and tamale topped with chili and wash it all down with a smooth margarita or bottle of imported, ice-cold beer.

Housed in a former country club, White Dog Hill offers guests an elegant interpretation of classic American cuisine, expansive views of the surrounding Oklahoma prairie and spectacular sunsets. Dine on smoked pork chops, quail, pan-seared catfish, Cornish game hens and grilled shrimp, but save room for homemade pies and seasonal strawberry shortcake. The locals know that wine and dessert is best served on the outdoor patio with the Oklahoma sun sinking below the horizon. As the saying goes, at White Dog Hill you “come for the view, stay for the food.”

For a Cajun-inspired menu in the heart of cattle country, head to Warehouse Willy’s for burgers, steaks, fried pickles, garlic shrimp, gumbo and a local specialty known as mudbugs, or fried crawfish. Featured on HGTV and winner of a Golden Fork Award for great steak, Warehouse Willy’s serves up potato wedges and stuffed mushrooms to the tune of round-the-clock blues music. The cluttered walls are filled with endless bits of nostalgia and dim lighting creates the fun, upbeat atmosphere of a local blues joint.

Named by USA Today as one of the Top 51 Pizza Parlors in the nation, Sam & Ella’s Chicken Palace is home to some of the best pizza found in the state. With a misleading name (chicken is nowhere on the menu) and famous for employing Carrie Underwood before American Idol fame, Sam & Ella’s has solidified itself as a local and regional hot spot. Local favorites include the Big Sloppy Pie with double cheese, double pepperoni and layers of black olives, and the Rock Island Red with ham, mushrooms, sweet onions, mozzarella, pineapple and drizzles of honey.