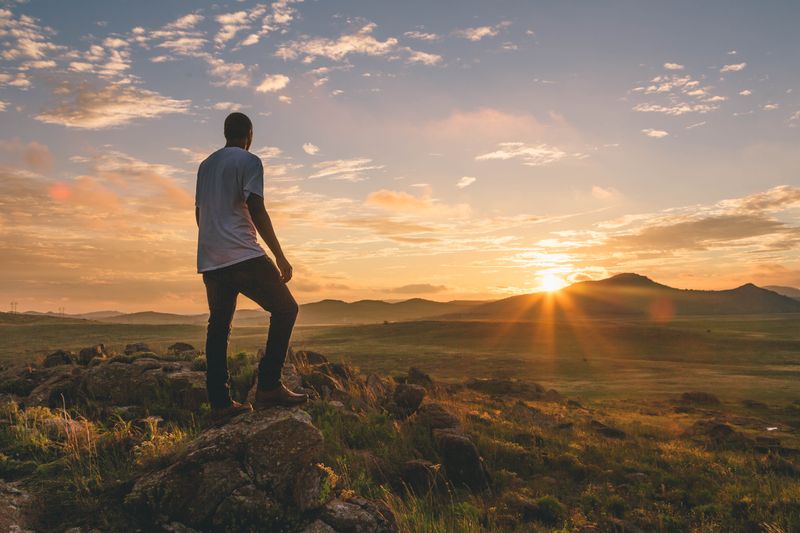 Mile for mile, Oklahoma offers the nation’s most diverse terrain. It’s one of only four states with more than 10 ecoregions, and has by far, the most per mile in America according to the EPA. Oklahoma’s ecoregions – or, terrains/subclimates – include everything from Rocky Mountain foothills to cypress swamps, tallgrass prairies, and hardwood forests to pine-covered mountains. Each is graced with wide blue lakes, rivers and streams.

The Western High Plains ecoregion is found in the panhandle of Oklahoma. With a greater elevation than the vast Central Great Plains found to the east, the Western High Plains also receives less rain than surrounding ecoregions. The terrain is relatively smooth and the natural vegetation of the area is the famed buffalo grass cited by pioneers as they migrated west.

A visit to Oklahoma's panhandle truly delivers a taste of the frontier. Panoramic vistas and outdoor activities await those wanting to experience the wide-open spaces. Saddle up for a ride across the plains, set up camp and drop a line, or grab your backpack and explore the area's dazzling plateaus. Here in the Sooner State's western-most counties, you'll find an abundance of wildlife, including some of the nation's largest prairie dog towns, sites of archeological and historic significance, and welcoming neighbors in Boise City and surrounding towns who stand ready to roll out the red carpet.

The Southwestern Tablelands ecoregion encompasses parts of the panhandle and northwestern Oklahoma. A zest for adventure is the key to experiencing Oklahoma's Southwestern Tablelands. Take a wild dune buggy ride through the sands of Beaver Dunes Park, or climb to the Sooner State's highest point, Black Mesa, where spectacular views and star-gazing at its finest await. Explore the area's eye-catching rock formations or snap some photos at the Guymon Game Reserve. Relive the pioneer experience by traversing the original Santa Fe Trail, or let your imagination capture the scene at the Washita Battlefield National Historic Site. From Kenton to Guymon to Cheyenne, experience the great outdoors and visit historic attractions.

The Central Great Plains, Oklahoma's largest ecoregion, encompasses most of the western half of the Sooner State from north to south. Whether you're touring the grandeur of the Marland Mansion in Ponca City, enjoying the ATV trails at Little Sahara State Park or rock climbing at the Wichita Mountains National Wildlife Refuge, you'll revel in the diversity offered by Oklahoma. America's "Mother Road", Route 66, traverses the Central Great Plains, so stop by the Oklahoma Route 66 Museum in Clinton or the National Route 66 Museum in Elk City for an in-depth look at the nation's most acclaimed highway. From boating to rappelling to golf to water skiing, outdoor enthusiasts flock to this ecoregion to experience a full array of fun, family activities.

Originally covering over 142 million acres in 14 states, the Tallgrass Prairie was one of North America's major ecosystems. Today, the ecoregion is confined to Oklahoma and Kansas. Sweeping vistas of the open prairie landscape along with incredible sunrises and sunsets are just some of the many natural attractions of this small ecoregion in northcentral Oklahoma. A driving tour through the Nature Conservancy's Tallgrass Prairie Preserve, near Pawhuska, conveys the same images of namesake tallgrasses - big bluestem, Indiangrass and switchgrass - and herds of grazing bison that greeted pioneers as they crossed these plains in covered wagons over a century ago. For a scenic retreat, book a cabin at Osage Hills State Park, a densely wooded park nestled in lush, rolling hills.

The Crosstimbers ecoregion is the transition area from prairie to the west and low, forested mountains to the east. It runs from Oklahoma's northern border to southern border covering most of central Oklahoma. Step into Oklahoma's wide-ranging Crosstimbers ecoregion (aka Central Oklahoma/Texas Plains), and you'll find an incredible variety of activities! Bask in the outdoors at numerous lakes and state parks throughout the region, from the heavily wooded Chickasaw National Recreation Area in Sulphur to Lake Murray, Arcadia Lake and more. For a more luxurious getaway, head to Guthrie, Oklahoma's Bed and Breakfast Capital, where elegant hospitality and historic attractions abound. Further north, Bartlesville's Price Tower (Frank Lloyd Wright's only skyscraper) promises upscale accommodations, while the Woolaroc Ranch, Museum and Wildlife Preserve opens the door to the finer things in life as enjoyed by oilman Frank Phillips.

The skies in the Ouachita Mountains in southeastern Oklahoma are filled with towering pines, making for lush, peaceful surroundings for nature lovers.

The East Central Texas Plains ecoregion covers part of central Oklahoma's southern border and is characterized by one of the rarest plant communities on earth - the oak savannah. The region marks the transition from the arid plains to the west and moist broadleaf forests of the east and is widely canopied by post oak trees. Gently rolling and heavily wooded, the East Central Texas Plains ecoregion is home to the Choctaw Nation of Oklahoma and Lake Texoma. Both Fort Washita Historic Site & Museum, and the Three Valleys Museum tell tales of life in territorial times through engaging exhibits and living history events. Soak up the charming small-town culture in downtown Durant or catch a world-class concert at the Choctaw Casino Resort.

Northeast Oklahoma's Caves and Prairies ecoregion dazzles visitors with its lush landscape, a rich mosaic of grassland and forest. Plan a rustic getaway at The Lodge at Sequoyah State Park and the adjoining Sequoyah State Park, where golf, tennis, horseback riding, chuckwagon cookouts and more await. Oklahoma's rich American Indian heritage is abundant in the region, with destinations including the Five Civilized Tribes Museum and Ataloa Lodge Museum in Muskogee. The Fort Gibson Historic Site captures the territorial spirit with a re-constructed log stockade, and the Honey Springs Battlefield comes alive every three years as reenactors recreate the largest Civil War battle in Indian Territory. Pay homage to Oklahoma's first world-famous celebrity, Will Rogers, at the Will Rogers Memorial Museum in Claremore.

The heavily forested Ozark Highlands ecoregion is one of the Sooner State's most popular destinations, with the Grand Lake O' The Cherokees serving as the jumping point for outdoor activities of all types. You'll find 10 state parks around the lake, promising ample opportunity for boating, swimming, fishing and more. Or take a canoe trip down the Illinois River, where gentle rapids guide you along one of Oklahoma's most scenic water routes. Bird-watchers cite the region as a favorite, especially when the American White Pelicans stop by Grand Lake for a couple of months during their annual migration. Bald eagles, mallards and snow geese also abound.

The Ozark Forest (aka Boston Mountains) features an abundance of red oak, white oak and hickory trees in its heavily forested terrain. The region celebrates the Sooner State's American Indian culture at numerous destinations, including Sequoyah's Cabin in nearby Sallisaw. Trout fisherman head to the Lower Illinois River, Oklahoma's first year-round trout stream, while other outdoor lovers flock to Lake Tenkiller State Park and four other state parks in the region. Camping, fishing, water skiing and sailing are favorite pastimes of visitors to the Ozark Forest.

East central Oklahoma's Hardwood Forest (aka Arkansas Valley) celebrates the Sooner State's earliest inhabitants at the Spiro Mounds Archeological Center and at Heavener Runestone Park. At Robbers Cave State Park, walk in the footsteps of outlaws as you explore the hideout used by Belle Starr, Frank and Jesse James and other notorious notables. The forested valleys and ridges of the Hardwood Forest provide spectacular scenery and outdoor adventure. Whether you're looking for a gentle nature trail or a more rugged rock-climbing experience, you'll find it in the Hardwood Forest. There's also plenty of water fun at Lake Eufaula State Park, Robert S. Kerr Reservoir and other regional favorites.

The skies in the Ouachita Mountains in southeastern Oklahoma are filled with towering pines, making for lush, peaceful surroundings for nature lovers. The Talimena National Scenic Byway, traversing the crest of the Winding Stair Mountain Range in the Ouachita National Forest, is one of the Sooner State's premier destinations for fall foliage - although you can certainly enjoy the view year-round! Beavers Bend State Park, adjacent to Broken Bow Lake, is a favorite spot for trout and fly fishing, boating, eagle watching, horseback riding and nature hikes. Other recreation areas in the region include the Glover River, the Kiamichi River and the Little River, as well as five other state parks.

Encompassing Oklahoma's southeastern border, the Cypress Swamps & Forests (aka South Central Plains) is replete with outdoor recreation, American Indian heritage and small-town charm. Water sports abound at Hugo Lake Park and Raymond Gary State Park, while wildlife of all sorts can be found at the Little River Wildlife Refuge, where mallards, wood ducks and raccoons share the cypress swamps with alligators and beaver. Immerse yourself in the heart of the Choctaw Nation with a visit to the historic Wheelock Academy, a former boarding school for Choctaw females that's being lovingly restored by the Choctaw people.

As you can see, there's an amazing diversity of landscapes and terrains waiting for you in Oklahoma. Pick your passion and get outdoors to enjoy your favorite environment. Or traverse the state to sample a vast array of scenery in a shorter distance than you can do it anywhere else in the country.