The Marland Mansion: Ponca City's Palace on the Prairie

If the Marland Mansion’s lavishly decorated walls could talk, they would tell visitors of an unconventional family that stirred up drama in the small town of Ponca City. 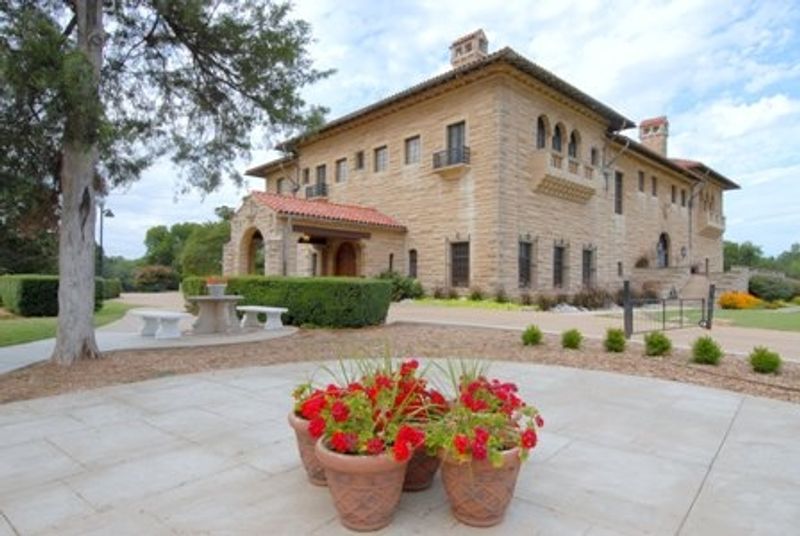 Inside and out, visitors find the Marland Mansion in Ponca City to be one of the most luxurious spaces in the state. It was once the home of oil baron E.W. Marland.

From the extensive grounds to the over-the-top rooms, the Marland Mansion exudes the extravagant lifestyle that could only be afforded by E.W. Marland, the legendary founder of Marland Oil, who once owned a tenth of the oil reserves in the world.

Visit Ponca City to stroll through the Marland Mansion Estate today and discover the mansion’s exceptional history and mysterious past, from Marland’s rise to success through the making and losing of two million dollar fortunes to his headline-making second marriage and his involvement in state and national politics.

Inspired by Florence, Italy’s Palazzo Davanzati, the Marland Mansion is like no other structure on the Oklahoma plains. It was built and furnished almost 100 years ago by famous European designers and sculptors of the time to meet every specification of oil tycoon and then later Oklahoma governor, Ernest Whitworth Marland. Open to visitors as a National Historic Landmark, a tour of this mansion tells the story of E.W.’s fabulously dramatic life.

The story of the mansion begins with his move to Ponca City at 33 years old. Born in Pittsburgh, E.W. built a promising oil business in West Virginia but lost it all in the financial crisis of 1907. He moved to Oklahoma with his wife, Mary Virginia, and after drilling seven dry holes in Oklahoma, E.W. finally experienced his first oil boom on land he leased from a Ponca Indian in 1911.

By 1922, Marland Oil Company employed more than a third of Ponca City’s population. As he was building his oil empire, E.W. and his wife indulged in an affluent lifestyle. With no children of their own, the couple adopted Virginia’s niece Lyde (who preferred the nickname Lydie) and nephew George. Although retaining their true mother and father in Flourtown, Pennsylvania, the children relished their new home and attended parties, private schools and traveled often.

Unfortunately, Mary Virginia Marland struggled with a chronic illness for several years that made her an invalid. Many trips were made to Kansas City to see a specialist. She died tragically in 1926.

During his two years as a bachelor after Mary Virginia drew her last breath, Lydie and E.W. shared favorite pastimes of polo, fox hunting and horseback riding. E.W. was known to keep a close and protective eye on his adopted niece keeping suitors at bay. In January of 1928, the gossip began when 28-year-old Lydie and 54-year-old E.W. boarded his private railway coach to Pennsylvania to have the adoption annulled. The two were married in her parents’ home in July 1928, and Lydie, who was once E.W.’s niece and adopted daughter, became the second Mrs. Marland.

After their small wedding the couple took an extended honeymoon through Canada to California. While traveling with his new wife on a cross-country road trip, Marland was unaware that his oil empire was being overthrown in a hostile takeover back in Oklahoma. He had borrowed money from New York banker, J.P. Morgan Jr., and was soon forced out of the business through Morgan’s conniving tactics and ruthless behavior. Marland Oil had become Continental Oil Co., better known as Conoco, during the overthrow.

Although the couple had lost their fortune, newspapers still lit up during Lydie’s reign as Ponca City Princess. The pair attempted to move into what many were now calling the Palace on the Prairie, the over-the-top home E.W. had completed just in time to be a wedding gift for his young bride. Lydie became somewhat of a celebrity, attracting local and national press as the couple consistently hosted polo games, fox hunts and formal parties in the new mansion.

A guided tour uncovers breathtaking details such as Waterford crystals hanging from the chandeliers, gold leaf coverings on the ceilings and an elevator lined with buffalo skin.

Although much of their fortune had been lost, E.W. had just enough to begin a new career in politics. Frustrated with the banking system that drove him out of his own business, he campaigned, served in the U,S. Congress and later became the 10th governor of Oklahoma. The Pittsburgh Post-Gazette proclaimed Lydie as the youngest and perhaps prettiest first lady Oklahoma had ever seen.

Visitors to the Marland Mansion today can experience the same opulence enjoyed by the Marland family. A guided tour uncovers breathtaking details such as Waterford crystals hanging from the chandeliers, gold leaf coverings on the ceilings and an elevator lined with buffalo skin. Rich tapestries hang on walls surrounded by detailed metal railings, sterling silver wall sconces, artisan painted ceilings and hand-carved oak paneled walls. E.W. spared no expense in creating the palace of his dreams.

Unfortunately, the newlyweds would live in the mansion for less time than it even took to build. Within two years of moving in the couple was unable to afford utilities in the sprawling estate and were forced to move into a smaller structure on the mansion grounds, the renovated chauffer's cottage. The staggering cost of operating the mansion should have been no surprise to E.W., whose elaborate construction project ended with 861 light bulbs working to illuminate the four-level, 43,561-square-foot house.

E.W.’s over-the-top lifestyle came to a close with the heartbreaking sale of the mansion six months before he died. The mansion he built and furnished for $5.5 million was sold in 1941 to an order of monks for $66,000. He died of a heart ailment six months later in the cottage where he and Lydie resided.

The unique combination of extreme wealth, success and unusual circumstance of their marriage kept the rumor mills churning throughout their lives. Many speculated the age gap between E.W. and his young love had a hand in destroying his business success. Anyone who knew Lydie knew she had cultured tastes. A Pittsburg newspaper reported in 1934 that she enjoyed “a frolic with her Irish setters” and “a cool plunge” in her spare time and also spent time studying French and piano and visiting friends in Washington.

After the death of her husband, Lydie became a recluse. Many thought she had died and the Saturday Evening Post even ran an article titled “Where is Lyde Marland?” E.W. had spent his entire life proclaiming his love of Oklahoma and dedication to Ponca City, even promising to stay in town no matter how much money he acquired. Heartbroken and lonely, Lydie chose to leave town in 1953 and spent 22 years as an elusive drifter while continuing to pay taxes on the small cottage on the property left in her name.

The Palace on the Prairie served as a home for monks from 1941 to 1948 and then a nunnery from 1948 to 1975 before Lydie returned to Ponca City to help facilitate the sale of the mansion for public use. The city of Ponca City and Conoco joined together to purchase the mansion and the 30-acre complex surrounding it. Lydie returned to live in the chauffer's cottage from 1975 until her death in 1987, only visiting her beloved mansion a handful of times.

Many pieces of E.W.’s lavish life remain in Ponca City today, even outside the mansion walls. The millionaire conducted elaborate fox hunts on the property, shipping in a Master of the Hounds, special trainers, horses and red foxes. Although they’re not indigenous to Oklahoma, visitors can sometimes glimpse a red fox that much like E.W.’s extravagant hopes and dreams, got away from him.

While touring the mansion, don’t miss the Marland family statues. E.W. had his favorite sculptor design three statues of French limestone. Lydie’s statue is the most popular. Disillusioned, she paid a man to destroy the statue after E.W.’s death, it was discovered buried in 1987 and was refurbished. It now sits in the lobby alongside the statue of her brother George. Copies of the statues are on the grounds in their original locations.

Also, don’t forget to look up during your tour. A carving on the ceiling in the Hall of Merriment reveals a group of monks eating. Overhead on the balcony adjacent to E.W.’s living quarters on the North Terrace you’ll find the Latin phrase meaning “A man’s home is his castle” etched into the corbels.

E.W. didn’t miss a single detail in the house. Even the drainage system meets his standards for perfection. Gutters, drain pipes and water boxes made of lead bear the initial “M” and the date 1927. The elaborately decorated draining system includes ornate gargoyles overlooking the pool terrace and allows runoff to pour out the mouth of Pan, a Greek creature of mythology, on the south terrace.

The oil baron was famous for his love of animals. He and Lydie’s two horses are buried at the mansion’s stable and he commissioned a famous Italian stone carver to create the likeness of his four dogs and place them along the west entrance of the mansion. Flanking the porte cochere entrance are windows with iron grill work featuring the heads of the dogs as well.

Recurring themes can be found throughout the architecture and décor in the mansion. Keep an eye out for dragons and angels as they appear in wall sconces, tile mosaics and doors throughout the home.

While still extravagant, guests should keep in mind that the mansion was even more over-the-top in its heyday. Several changes were made to the estate after E.W. died to make it easier to maintain. For example, an elaborate double Olympic-size pool was filled in, as well as four of the five lakes surrounding the mansion. Lake Whitemarsh, named for E.W.’s yacht, remains.