Route 66 in Oklahoma connects two of Oklahoma's largest cities: Tulsa and Oklahoma City. Along this nostalgic 90-mile stretch you'll encounter remnants of the past, as well as unique attractions that are just as busy now as they were in the Mother Road's heyday. 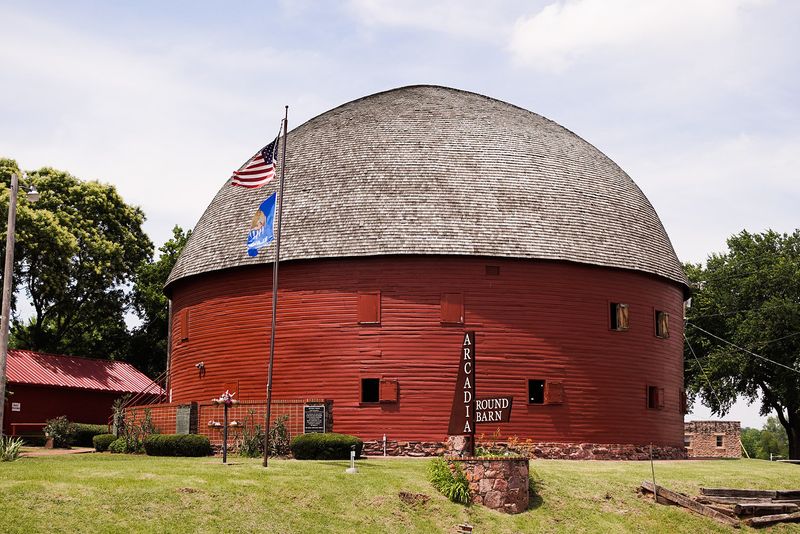 Built by local farmer William Harrison Odor in 1898 using native bur oak boards, the Round Barn in Arcadia is one of the most-photographed attractions along Route 66.
Photo Credit: Laci Schwoegler/Oklahoma Tourism

With the nation’s longest drivable stretch of Route 66 crossing through Oklahoma, you’re sure to discover something unexpected. Explore interesting museums packed with history, dine on homemade favorites just like grandma used to make and keep an eye out because you just never know what could be around the next twist and turn on America’s most beloved highway.

Located a few blocks north of historic Route 66, Circle Cinema was constructed in 1928, just two years after Route 66 officially began. Stop by to catch a film at this historic cinema house or take a snapshot of this unusually high, colorful brick building and neon sign.

Originally built in 1912 as a filling station, the one-of-a-kind Blue Dome building is the anchor of what’s now known as the Blue Dome Entertainment District. You can’t miss its namesake building, which stands over two stories tall at the corner of 2nd and Elgin. Now home to Arnie’s Bar, you can fill up with traditional Irish pub food and a stout draft.

Back on Route 66, take a spin by the Greenwood Cultural Center and Cain’s Ballroom. Prior to the devastating race riot of 1921, the 35-block Greenwood District was known “Black Wall Street,” and it was also popular area for jazz and blues. Now, the Greenwood Cultural Center stands as a monument with historic memorabilia and photos. Just down the street, Cain’s Ballroom also has a rich history dating to 1924 and is known as the “Home of Bob Wills,” because it was the site of his regular radio broadcast.

Just southwest of downtown Tulsa, old Route 66 runs parallel with the Red Fork Expressway, which is in a railroad-heavy area of the city famous for being the site of the first oil strike of Tulsa back on June 25, 1901. Visit Route 66 Village to see the famous 194 foot tall oil derrick, as well as restored train cars at this open air museum. Ollie’s Station Restaurant also pays homage to the area’s oil and railroad industries with fun train-themed décor that will wow all ages. Down-home favorites like liver and onions, chicken fried steak and pork tenderloin greet hungry diners as 10 trains run along the walls through small model cities.

Located one block off of Route 66, the Waite Phillips Filling Station Museum was built in 1922 and has since been fully restored to house automobiles from the 1920s. Just across the street, the Sapulpa Historical Museum is housed in what was built as a hotel in 1910. Take a tour of Sapulpa’s early history including exhibits like a turn-of-the-century kitchen and livery stable.

For over 70 years, The Rock Café has been feeding hungry travelers along Route 66. This unique stone building in Stroud serves up a mixture of old favorites like cheeseburgers, as well as dishes you wouldn’t expect like alligator burgers and jagerschnitzel. The café’s owner, Dawn Welch, was even the inspiration for the character of Sally Carrera in the 2006 Pixar film, “Cars.”

Another thing you might not expect to find in Stroud is the Shoe Tree. This tree, located along Route 66 east of Stroud, welcomes visitors to tie the laces together, write a name on their shoes and throw them into the branches.

Continuing along Route 66, the next town you’ll come to is Chandler, which is rich with Mother Road history. Visit the Lincoln County Museum of Pioneer History to explore a collection of vintage memorabilia relating to Route 66 and the town’s early days. The museum is situated in a 100-year-old red stone building that has been placed on the National Register.

Just down the road is the Chandler Route 66 Interpretive Center, which is housed in a historic 1930s-era armory building. The center recreates the sights and sounds of the Mother Road with nostalgic photos, videos and memorabilia like real 1965 Mustang seats and even virtual motel rooms. While you’re in Chandler, you’ll see vestiges of the past like the painted brick sign for the St. Cloud Hotel and an old Phillips 66 filling station.

Next up is the Seaba Station Motorcycle Museum in Warwick. Housed in an old filling station, this museum showcases 65 motorcycles dating back from 1908 to the present. Imagine feeling the wind rush by as you zip along this curvy section of Route 66 to the next attraction.

In Arcadia stands the famous red-hued Round Barn. Built in 1898, the Round Barn stood sentinel over the Mother Road for 90 years before its roof collapsed, causing major structural damage. The barn was lovingly restored by a volunteer group dubbed the "Over-the-Hill-Gang" (so named because most of its members were over 65 years old), and it opened to the public in 1992. The Round Barn is listed in the National Register of Historical Places and is the only wooden round barn in Oklahoma. Step inside to take a closer look at this landmark treasure.

Wrap up your Route 66 adventure from Tulsa to Oklahoma City with a stop at POPS. This one-of-a-kind Arcadia convenience store, soda fountain and diner features a 66-foot-tall soda bottle out front and a collection of several thousand colorful bottles lining glass shelves along the windows indoors. Pop in to create your own mix-and-match collection from over 650 kinds of ice-cold soda.

Oklahoma’s stretch of Route 66 has even more to offer as you continue westward. Read Route 66 Road Trip: Oklahoma City to Weatherford for the next leg of your journey.