Explore one of Route 66’s most pristine stretches as you travel from Oklahoma City to Weatherford. 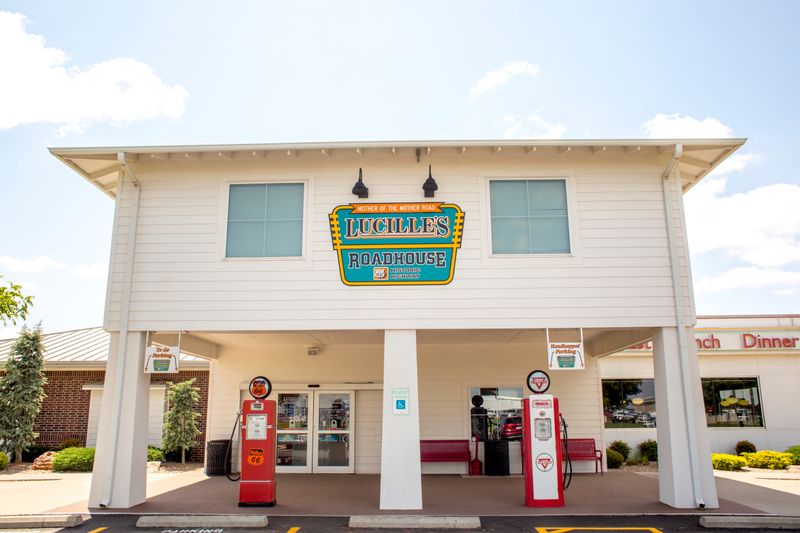 Just west of Oklahoma City, Route 66 shifts from the urban bustle of the state capitol to a quieter, more contemplative pace. Stretch your legs at a Route 66 themed park, uncover unique aspects of American history and wax nostalgic at a 50s themed diner. Read on to discover some must-see sights from Oklahoma City to Weatherford.

Discover Oklahoma’s unique past at the Oklahoma History Center where you can learn about everything from Native Americans and Land Run history to Route 66 and space exploration. This top-notch museum is well known for fun, interactive exhibits including a 1930s house replica that gives visitors a glimpse into the lives of Oklahomans right after the famed Mother Road was established.

When Route 66 was being constructed, a large part of Oklahoma’s early economy was in the petroleum industry. Witness the influence of the state’s oil and gas industry at the Oklahoma State Capitol, the only state capitol to have an active oil rig located directly on the capitol grounds. The Greco-Roman architecture, rotating art exhibits and 11 acres of floor space decorated with murals and restored stained glass make any visit a real treat.

The Gold Dome Building is a major landmark along Route 66. Located on the southern end of Oklahoma City's notable Asian District, the Gold Dome building was originally constructed as a bank in 1958 and is one of just five buildings in the world with a geodesic design. A total of 625 individual panels make up this unusual Oklahoma City building.

Just down the street stands another one-of-a-kind sight, the Milk Bottle Grocery. The building, which is located on a miniscule lot on a busy Oklahoma City street, was constructed in 1930. The milk bottle was hoisted into place about 18 years later and has been a fun photo-op ever since.

Take a quick break from your Route 66 road trip and stretch your legs at Route 66 Park. Located along the shore of Lake Overholser, this 148-acre park features one mile of walking trails, three ponds and even a fun observation tower. The park also has an oversized concrete map of Route 66 that shows the route from Illinois to California, so you can reminisce about attractions you’ve already seen and find out what is in store.

From the park, continue west on Route 66 for about four miles to Yukon for the next photo-op: a painted message on the side of a towering grain elevator touting “Yukon’s Best Flour.” You can’t miss this local landmark day or night, as the restored 42” by 55” sign is lit up by LED lights.

El Reno is known for its historic districts and important role along the famed Chisholm Trail, but the city’s real claim to fame is the onion burger. The local practice of frying sliced onions with hamburger, so the onions become caramelized amid the hot fat and juices, dates back 100 years. Several downtown restaurants next to Route 66 excel in the tradition including Robert’s Grill, Sid’s Diner and Johnnie’s Grill.

After savoring the local fare, take a guided tour of Historic Fort Reno, located west of El Reno on Route 66. Established as an Army post in 1876 to keep an eye on local American Indians, Fort Reno later became a POW camp for captured Germans during World War II. Fort Reno is now primarily used as a USDA research station, but a nonprofit group has helped maintain and restore the fort’s historic buildings including a visitor’s center, chapel, officer’s quarters and cemetery.

West of El Reno is one of the best-preserved stretches of Route 66 in the nation. The highway in this region was built from Portland cement during the early 1930s, and most of it survives. The road surface’s faded pink color, the occasional upraised curbs and the “thump thump” sound you hear as you drive over its expansion joints make it easily recognizable.

Another must-see along Route 66 is the Pony Bridge in Geary. Built in 1933, the bridge is nearly 4,000 feet long and was considered a mighty construction undertaking at the time. It consists of 38 yellow pony trusses and spans the South Canadian River between Bridgeport and Calumet.

Near Hydro sits Lucille’s Service Station, one of only two upper-story, out-thrust porch style stations left on Oklahoma's stretch of Route 66. Lucille Hamons, who operated the station from 1941 until her death in 2000, refused to close despite extreme financial pressures from being bypassed by I-40. Lucille grew into a semi-celebrity because of her stubborn resiliency and her hospitality to Route 66 visitors. Although Lucille’s has been closed since her death, many travelers pause to shoot a photo or two of the restored structure and pay their respects to the self-proclaimed “Mother of the Mother Road.”

Lucille’s Roadhouse, which was inspired by the original Lucille’s Service Station, is just a few miles away in Weatherford. Hungry diners come here for the fun 1950s diner vibe and tasty American favorites like hand-breaded chicken fried steak, cheeseburgers and ribeye steak. Experience a taste of Route 66 while enjoying one of their 16 beers on draft, which feature all four major Made In Oklahoma breweries.

Another fun stop in Weatherford is the Heartland of America Museum, which features unique displays relating to American history including an original Route 66 diner, one room schoolhouse, blacksmith shop and more. Anyone driving through Weatherford will also notice the giant wind turbines lining the highway, and the museum offers tours of the nearby Wind Energy Park daily by appointment.

Round out your Oklahoma Route 66 road trip with this list of must-see attractions from Way Out West: Cruising Route 66 from Weatherford to Texola.